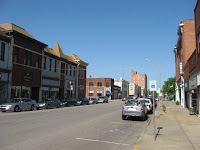 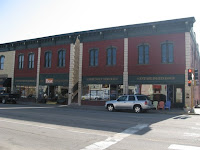 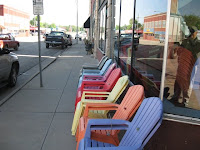 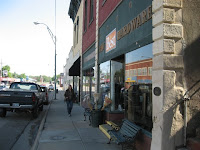 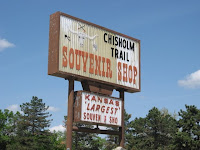 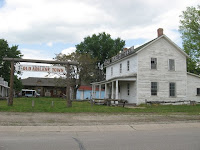 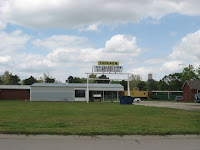 After visiting the Presidential Center, it was time to get a feel for Abilene. In walking around and talking to folks in the stores and on the street, we found it to be a very friendly town and one that seems to be doing very well. We noticed that all the stores were occupied and selling items that you might need on a daily basis. One of the store owners indicated that they worked hard to keep Wal-Mart out of the area, which allows the rest of the town to stay in business. We have certainly seen many small towns in various stages of decline, at least sometimes due to the mega stores moving in. One of the stages of decline includes stores selling only antiques, gifts and other things that are not used regularly-followed by many to all store fronts empty.

We wandered the town looking for signs of the early frontier days. These were easily found in historic plaques and monuments. The town was in the right place at the right time. After the end of the Civil War, huge herds of cattle were left on the Texas plains without demand. The railroad was just coming into town from the east and a stockman in Chicago believed that there was a market for these cattle in the east and that the cattle in Texas could be driven north to the railhead in Abilene. So the Chisholm Trail became the route to push cattle to Abilene and over the next five years over a million head of cattle arrived in Abilene.

Abilene became the first of the Wild West cattle towns made famous by all those Hollywood movies. The town became rowdy and uncontrolled with several town marshals being driven out. Wild Bill Hitchcock brought some level of peace thru very violent means.

There was an attraction that attempted to show what life in the early days was like, but failed to make it financially. We were able to visit what was left and you still came away with a feeling of life in the “old west”

What saved the town after the end of the cattle drives was the discovery that the soil in the area was perfect for growing wheat and a new era of prosperity began. There are a number of mansions in the town, mostly built by bankers and doctors in the late 1800’s. One of them is the Kirby House which is now a restaurant. We checked it out and thought it would make a good place for lunch. Unfortunately, as it turned out, we got some local knowledge advice about the Hitchin post cafe as a place all the locals eat. So we went there instead. I can only say that once we were done, Anneke needed some antacids real quick. Our friend, George in Miami, sent some advice to eat at the Kirby house, but since I am a bit behind in my blogs, it arrived too late for Anneke’s digestive system.
Posted by Chuck and Anneke's RV travels at 4:22 PM