Black canyon of the Gunnison

The Black Canyon of the Gunnison National Park is all about natural beauty and the power of nature. This dramatic canyon displays parts of the earth that are nearly two billion years old. From the rim to the current surface of the Gunnison River is over a half a mile deep. It has taken over two million years for the river to cut through the rock to leave what is seen today. To put that in some perspective, in the time period that humans have existed on this planet, the canyon would have been cut about five feet deep out of the over 2500 feet depth that exists today.

For those interested in geology, the lighter tan sections of the generally dark stone rocks where formed when molten rock was forced into fissures in the existing structure leaving the lighter bands you see today. This occurred over a billion years ago.

We did the south rim drive with numerous overlooks and lots of hiking trails to explore. It is considered to be one of the most dramatic canyons in the USA.

When visiting this part of the country, it is a must see park.

http://www.nps.gov/blca/
Posted by Chuck and Anneke's RV travels at 10:40 PM No comments: 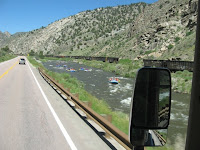 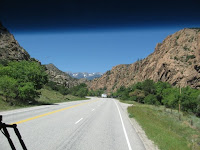 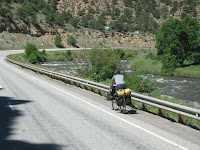 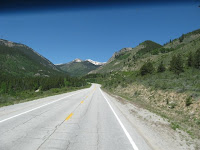 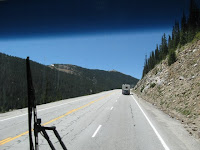 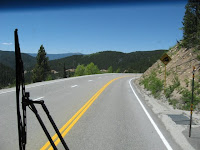 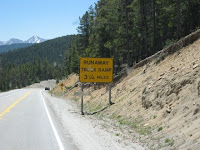 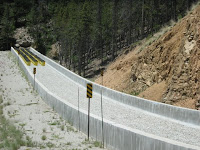 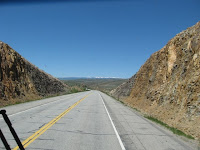 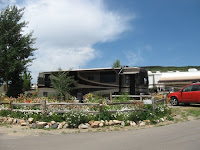 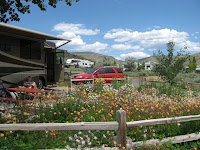 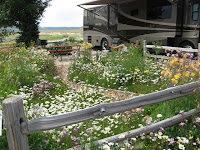 We left Canon City and headed west on Route 50, climbing steeply to cross Monarch Pass, then a steep descent into the valley to reach Gunnison, CO. It was a good test of the engine as we climbed with temperatures in the high 80’s. A number of big rigs and RV’s were struggling and occasionally we passed one by on the side of the road waiting for the engines to cool down.

It was interesting to watch a number of bicyclists climbing at a slow but steady pace. We arrived at the pass without incident and did a quick walk around. Then it was down the other side on an equally steep grade. Going down can often be more difficult than the climb if something goes wrong. Should the brakes have problems, it is a long way between runaway ramps. With the engine brake on the coach, we had no issues.

We arrived at our campground that overlooks the longest lake in Colorado and is well known for its great fishing. We located a spot with a wild flower garden and set camp and explored the area. Since we have been here, we have had lots of compliments on “our” garden.

The weather continues to be poor and we will have to work around it to see the local sights.
Posted by Chuck and Anneke's RV travels at 8:08 PM 1 comment:

We have moved west to Gunnison, CO, but before we left Canon City, we drove a panoramic road known as Skyline Drive. It is a three mile one way road that is accessed from Route 50 west of Canon City and ends in a quiet section of the city.

The road was built in 1903 by prisoners housed in Canon City. It is built on the top of a limestone ridge locally called a hogback and provides a clear view of the valley below. You drive about 800 feet above the surrounding plain on a 30 foot roadway, but some attention needs to be paid to the road as the next stop, if you wander off the road to far, is 800 feet down.

In 1999, a dinosaur trackway was discovered alongside the road, where you can see the impressions left in the limestone from their feet. We stopped at a pull off so I could have a closer look. Anneke was still talking on the cell phone when I walked back to the site. When she finished and got out of the car, I was nowhere to be seen, so she immediately jumped to the conclusion that I was 800 feet down somewhere. A couple of tough motorcycle types had stopped near the car and she was sharing her concerns with them as I rounded the corner and headed back. It is nice to know you would be missed. I suspect part of it was a fear that she would have to drive the car off the hogback.

It was a great drive. Next we have to take the motorhome over Monarch Pass.
Posted by Chuck and Anneke's RV travels at 3:58 PM No comments:

Although we have had a good view of the Royal Gorge from our train trip, we thought we would visit the Royal Gorge Park anyways. We wanted to see what had changed since we were here 20 years ago with Heather, Katie and my mother. In addition to the Bridge, tram ride and incline railroad, they have added a bungee swing over the gorge and a number of stores and shows.

The view remains breathtaking and we walked the bridge and took the incline rail ride to the river bed and generally enjoyed the morning in the sunshine.

Tomorrow, we leave the Canon City area and head to a campground just west of Gunnison, CO.

I have included a picture from our last visit to the bridge, just to show that not just the park has changed in the last 20 years.
Posted by Chuck and Anneke's RV travels at 10:04 PM 3 comments: