The second day of the balloon festival allowed us to see the start of the fleet liftoff and flight of most of the balloons on the field. There was a full crowd on hand to enjoy the balloons and other activities.

In addition to the balloons, there was the vendor row, a great concert by the well known gospel singer Guy Penrod and finally a great fireworks display.

After most of the balloons took off, the remaining ones set up for tethered rides. This proved to be a very popular event with long lines for the short ride up to about 100 feet. We observed several reluctant riders, who clearly wished to keep[ both feet firmly planted on the ground.

It was a great day outdoors enjoying our first close up of lighter than air flight.
Posted by Chuck and Anneke's RV travels at 8:53 PM 7 comments:

We came to Decatur, AL to visit Anneke’s aunt and extended family. Serendipity had it that this was also the 34th Alabama Jubilee Hot Air Balloon Classic. Ok, we knew about the air balloon event, but did not realize how involved Anneke’s cousin’s husband was in this event. As we used to say- he was a big cheese. So in addition to seeing family, we also were treated as VIP’s for this event.

This was our first close-up look at a hot air balloon event. We had a great time watching the balloons; entertainment, food and being treated like VIP’s.

The first day, the evening balloon launch was cancelled due to “strong” winds, but the balloon glow event was a lot of fun.
Posted by Chuck and Anneke's RV travels at 8:24 PM 10 comments: 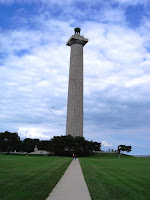 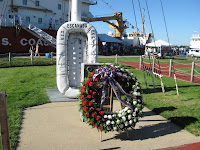 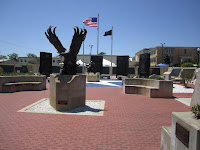 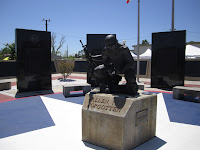 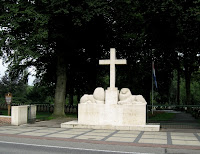 Memorial Day is a time to remember those who have sacrificed for their country. There are many permanent memorials around the country and the world to remind us of those sacrifices. It is not only the military who pay this price, but all who chose to serve their country. There is no better example of that than the Oklahoma City Federal building bombing.

As we travel, we always seek out these memorials. Nearly every small town has one. Then there are the National Cemeteries, battlefields, and the international cemeteries where our military are buried where they fell. We have been fortunate to be able to visit so many of these special places home and abroad.

We should remember these sacrifices every day.
Posted by Chuck and Anneke's RV travels at 9:49 AM 11 comments:

What is wrong with this picture?

Yesterday, we moved north to Athens, AL to visit with family. We are in a campground along I-65 that is designed for overnighters. It is in an open field and has no facilities except WI-FI. It still meets our needs, as we are not planning on spending any amount of time here.

After setting up we enjoyed some quite time and explored the area with Halley. It was a very pleasant evening and we spent the last hours of daylight sitting outside with some star gazing. Just before calling it a day, we turned on the TV and found most channels talking about the approaching severe weather?? After checking outside and still finding a nice evening, back to the TV. Indeed, it appeared that an intense front was coming fast and was already wreaking havoc to the west. To quote General Anthony Clement -NUTS!

Did I mention no facilities? First severe thunderstorm warnings were posted and then tornado warnings, with Athens being mentioned prominently. There was no building that even an optimist would consider useful. Checking the web, we found that there were no public shelters within the whole county. NUTS, again. Why did we leave the great Florida weather??

Then just when my long ago weather forecasting training suggested that the storm was weakening and we could finally turn in around 0100, the TV aces reported that a tornado was on the ground due west of Athens and was headed due east at a high rate of speed. I used several words, none of them was nuts. Trapped like rats.

Then the thing in life I always look forward to the most, dumb luck, kicked in and the front slowed and lost power only a mile or so from us and the tornado dropped a couple of miles south and hit another area. Luckily no injuries were reported.

In this case, I would rather be lucky than good.
Posted by Chuck and Anneke's RV travels at 9:01 PM 15 comments: 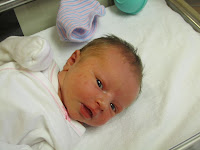 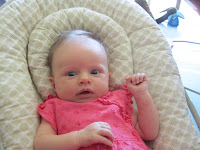 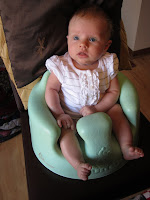 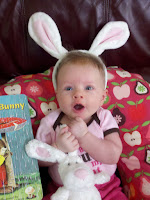 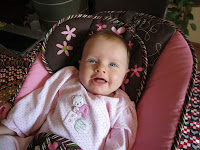 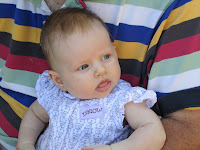 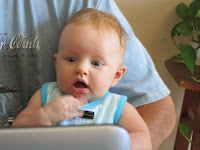 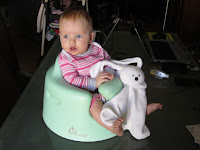 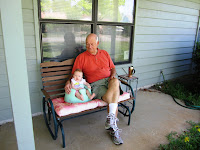 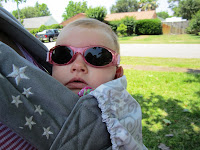 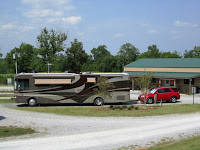 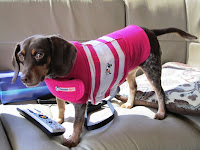 Of course, we knew the day was coming when we were going to leave Victoria and her parents to their new regular life. We have enjoyed immensely having the chance to spend so much time with our new granddaughter. It was truly a once in a lifetime experience for her and us.

Now it is time for us to hit the road again and for them to settle down to live without those pesky grandparents. Those first four months of life are such a stunning growth and learning experience. Starting with a helpless babe without any understanding except a need to be loved and fed, she has become a real person with a personality all her own and a growth of the mind as well. She is beginning to learn how to manipulate us and make her demands known. Also, how to let us know when those demands are not being met fast enough. What great fun!

We are heading north to visit with friends and explore lands not yet seen-more or less.

We made a short first day of travel, as I was expecting to find a few gremlins popping up after spending so much time in one place. The first one hit before we actually got underway. The left front jack stuck in the down position. After some fiddling and persuasion, it decided to give up and cooperate. I am actually still waiting for the next item to show itself. So that is a good thing. We are staying at the Montgomery South campground, which is just of I-65 and great for a short stay or longer if wanting to visit the local area. It accepts Passport America and has free WI-FI.

Halley is also suffering from transition stress. She has never really liked to travel and by now has lost what little comfort she may have developed. While visiting the local vet, we discovered the Thunder shirt, which is suppose to help with stress. So we have been testing it out. It had its first real trial today. It seems to help a bit, but we look forward to an even more relaxed traveling dog.
Posted by Chuck and Anneke's RV travels at 7:46 PM 13 comments: