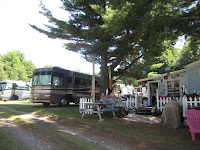 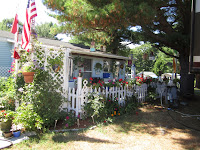 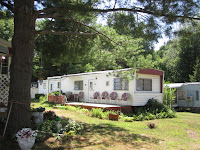 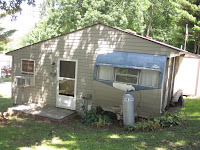 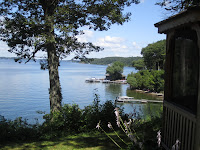 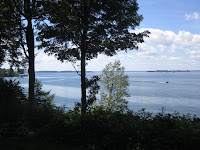 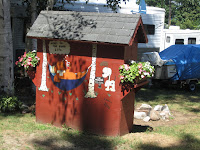 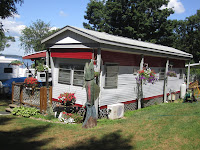 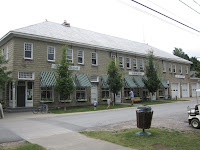 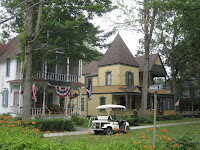 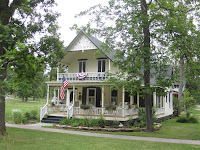 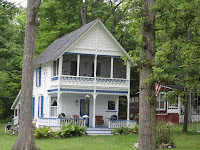 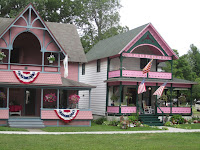 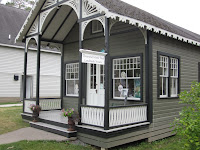 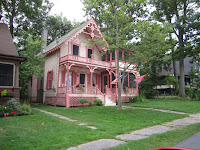 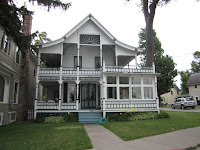 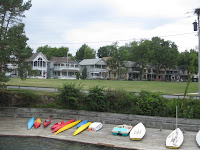 We have been very pleasantly surprised by both the friendliness of the people here and what a real gem this area is. It is understandable how so many people come here from all over the northeast to spend their summer vacations along the shore. We pulled the Birch Haven campground thru Anneke’s usual review process. When you first approach, there is a sudden concern about the size and location. It is a tight campground with only three or four sites available for transients, with the rest taken up by long time seasonal residents. Our spot was next to a highly decorated park model. The permanent equipment varies from brand new to very old, but all well cared for. It is right along the river and near all the attractions and water access. Add to that a laid back and friendly manager; it was a great choice for us.

On both the boat rides, we heard about the oldest settlement on the islands founded by a Methodist Colony over 140 years ago called 1000 Island Park. After some rough times, today it is a highly desirable place to live with mostly the original buildings and gingerbread style houses still in use. We have been told that when a home comes up for sale, it is snapped up by someone almost before it is listed. The colony association still owns the land with anyone purchasing the home granted a 99 year lease with an agreement to abide by the community rules. It is a very quaint and colorful place to spend the summer.
Posted by Chuck and Anneke's RV travels at 6:43 PM 6 comments: 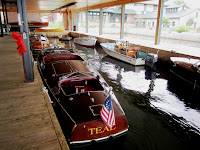 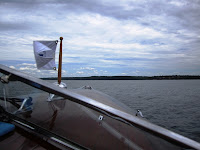 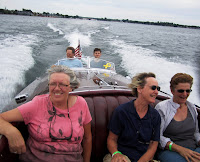 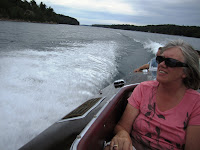 What makes the 1000 Island region of New York a tourist area for more than a 100 plus years is the St Lawrence River and all those islands. So to get a real appreciation for the area, you need to get on a boat. We have done that twice. First on a regular tour boat on a three hour tour, this covered the area from Clayton to Alexandria Bay including the Canadian side. There are thousands of folks who spend every summer on these islands, some quite small. In fact we passed perhaps the smallest island that was currently for sale. It would indeed have to be a small house on this tiny piece of land.

As could be expected the houses ranged from rustic to majestic and everything in between. One of the common themes among them was the boat dock. Except for a few of the larger islands, all the rest have access only by personal boat. The bridge spanning the river was built in the 1930’s and changed the way the majority of people traveled between the USA and Canada, at the same time providing road access to the largest of the islands.

While on the tour, there is an undeniable urge to live on one of these small islands as the lord and master of all you survey. Certainly, you readily understand why so many have chosen this as their vacation residence.

Since we enjoyed the first boat trip so much, we then went on the antique boat trip offered by the Antique Boat Museum. This was much personal with only six passengers and a lot more speed. In the last couple of years we have become very fond of fast boats. Since we come from a mostly sailing history, this is a new attitude for us. This trip only reconfirmed our intent that our next boat will have a big engine(s) and no sails.

If you come to the 1000 Islands, a boat trip or two is essential!
Posted by Chuck and Anneke's RV travels at 7:28 PM 7 comments:

George Boldt was a wealthy entrepreneur, who made his fortune in the hotel business. He and his much younger wife Louise had become enchanted with the thousand islands and by 1900 had spent a number of summers in the region on his yachts and mansions. He purchased Heart Island and several other islands in the area and in 1900 began construction on a landmark castle in the German style. It was to be six stories with 120 rooms, a powerhouse, huge tunnels, swimming pool, boat house on a nearby island, and the list goes on. This was to be a monument to his love for his wife.

Three hundred workers were used in the construction. The tower building called the Alster Tower, which resembles a defense/watch tower on the Rhine River, was their home while they were on the site. The construction continued for four years until disaster struck. Louise died suddenly at the age of 41 in 1904. George Boldt sent a telegram to the work site ordering work be stopped on the project. He never returned to Heart Island and left the unfinished castle as a mark of his love for his wife.

The castle was left abandoned for 72 years to the weather and casual use by others. It suffered a great deal of damage and decay during these years of neglect and vandalism.

Finally, the properties were turned over to the Thousands Islands Bridge Authority, on the condition that all monies obtained from the use of the property was to be used for restoration.

After over 100 years of history, the castle and grounds have never actually been lived in except for the brief periods that Boldt and his wife stayed in the Tower during those four years.

It is a sad monument to his love for his wife.
Posted by Chuck and Anneke's RV travels at 7:45 PM 10 comments: