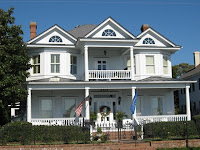 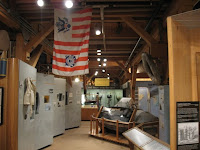 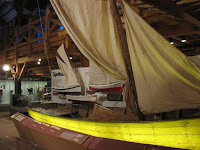 We have shifted our base of operations to the North Carolina coast and are camped at the Marine Corp Air station at Cherry point. The outer banks of North Carolina are well known to those interested in maritime history. Famous for violent weather and nasty shoal waters, this has been a grave yard of ships since the first ship arrived on these shores. The Coast Guard and its predecessor services –the Revenue Cutter Service, Lighthouse Service and the Life Saving Service have been a part of this history and part of the maritime community here since the beginning. The names of the capes and lighthouses here reflect the dangerous nature of the area. Coming from the south you approach Cape Fear, followed by Cape Lookout and if you still are in one piece, you will reach Cape Hatteras-perhaps the most feared of all the Capes for its violent weather and unforgiving shore.

Beaufort, NC is one of the earliest settlements on the coast founded in 1709. It is home to a very historic waterfront town center with homes built in the early 1700’s with many more built before the Civil War. It is also home to the North Carolina Maritime Museum.

It is currently a very popular stop over destination for small vessels heading north or south with the sun. It is also a central point to reach the outer banks by car or ferry.

We also made it to Atlantic Beach on the outer Banks to visit Fort Macon, an excellent restored example of the forts built along the coast for protection, first from the Spanish, then British and finally from the Germans. It has seen service from early 1800’s thru WWII. It was part of a string of forts along the coastline that included Fort Schuyler in what is now Bronx, New York that is part of the Maritime College complex, which is my Alma Mater. Fort Macon is now a state park and well worth the trip.

http://www.ncparks.gov/Visit/parks/foma/history.php
Posted by Chuck and Anneke's RV travels at 6:43 PM