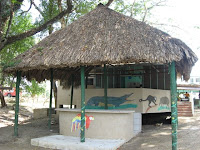 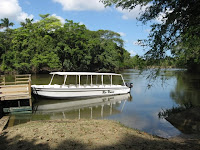 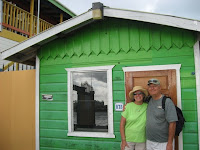 Our second port of call was Belize City. This is an anchorage port, since there are no adequate docks available. Offshore is the second longest barrier reef in the world. It runs over 175 miles from Mexico to Honduras. Belize gained its independence from Great Britain in the mid-1980’s and is a great source of pride among the citizenry.

This would be our first opportunity, ever, to visit a Mayan Ruin. The site called Altun Ha covers over 5 square miles with the central one square mile holding the ruins of 500 structures. Archeological investigations show that Altun Ha was occupied by 200 BC with the majority of the structures built between 200 and 900 AD. This culture was very well developed with an advanced understanding of mathematics and astronomy. At its peak, this site was thought to have a population of 10,000 people.

It was very impressive to learn about the culture from our guide and see the symbols of this long past culture survive to this day. While the ancient culture is gone, there are many people who can trace their heritage back to the ancient Mayans.

They produced a calendar that was significantly more accurate than any European calendar of the time. Currently, due to the accuracy of other predictions made by the Mayan’s, much has been made of their prediction that time ends in September 2012.

To learn more about this site and an explanation of what the attached pictures show, you can visit: http://en.wikipedia.org/wiki/Altun_Ha

After the visit, we had lunch at a small local restaurant along the Old Belize River. While we were enjoying our meal prepared in large ancient looking pots and served in a setting that could have been several centuries ago, we were joined at our table by a local taxi driver who regularly stops here for lunch, I assume while ferrying tourist around. The national language of the Belizeans is English, but they generally speak a local dialect when not in the presence of tourists. This gentleman spoke English like a real northern Yankee. It turns out that he was born and raised in Brooklyn and was an engineer by trade. While visiting Belize on vacation he fell in love with the place and lives most of the time in Belize and travels regularly back to Brooklyn to visit his children. So it still seems to be a small world, where you can meet a Belizean taxi driver from Brooklyn, who has travelled to many of the same places we have, and still find each other in the smallest and dare I say remote of places.

After lunch, we boarded our launch for a 25 mile tour on the Old River. This was mostly a nature tour with hopes of seeing some of the wild creatures that inhabit the area. Our guide, Simone, continued to entertain and educate us on the several hour journey with natural and historic facts about her country and its good and bad sides and even about some of her hopes for this fledgling new country. She even sang the national anthem. I had to remind myself that she was a first generation patriot, who witnessed the struggles for independence.
Posted by Chuck and Anneke's RV travels at 1:38 PM