Our week at Pocahontas 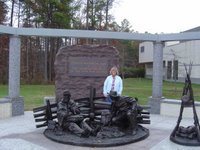 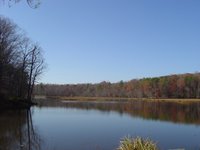 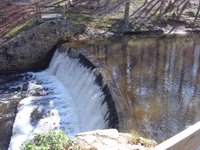 Last Sunday was Katie's birthday and the plan was to take her shopping at the outlet stores in Williamsburg, but since it was raining heavily most of the day, we opted for a trip to the local mall. Turns out malls are about the same everywhere, what a surprise. But this one did have Katie's favorite store-and we were able to get her some of her favorite items. We were prepared to take her out to dinner but she wanted one of her favorite home cooked meals after living in a hotel room for so long. She wanted a cassarole of cabbage, mashed potatoes, cheese and Kielbasa. Go figure!

Monday dawned a beautiful day and we headed to Williamsburg to revisit a historical area that we have enjoyed a number of times in the past. We walked the colonial streets and had a good traitional lunch at the King's Arms Tavern. Of course, we could not get out of town before we visited the Williamsburg Pottery Factory. It was almost the same as it was twenty years ago, except that it looked a bit run down and uncared for. Of course , I guess the same could be said for me.

This week we also made a more lengthy bike trip in this huge park and we had a great run the first several miles (all down hill) and things were great. We reached the dam and lake area and enjoyed some quiet time in the solitude. Then came the time to return. Despite our new bikes with 800 gears, it was a difficult push of those steep hills. Anneke surrendered and we had to find a less difficult way back. After studying the map, it was decided that we would take a shortcut thru the woods on a hiking trail. So we pushed the bikes a mile or so thru the woods directly back to the campground.

On Wednesday, rather than go biking again for obvious reasons, we headed to a relatively new historical park located at the "push thru battle" of Petersburg during the civil War. It is a very well done park and museum on the site of this battle with original Confederate HQ and earthen works still in place. The displays and interpretations were excellent. We spent nearly all day here and it left you with a better understanding of the terrible war it was. We highly recommend the Pamplin Historical Park and national museum of the Civil War Soldier.

Thursday we weathered the huge storm system that so badly damaged the Carolina's the day before. We reportedly received 4 inches of rain in 8 hours. Many roads were over run by overflowing creeks and it seemed for a awhile that Noah would have felt quite at home here.
We were lucky, we are camped on high ground and the only problem was water in one of the out side compartments, found to come from an improperly sealed electrical conduit.

Friday was a maintenance day and we took Katie to a nice dockside resturant for dinner. The one odd thing was that it had a panoramic view of the water around the circualr dining area and all the window seats were reserved for smokers! Now coming from Ohio, a state that just banned smoking in public, it was a bit of a shock. But lets not forget that VA still is the tobbaco state.

Pictures that are posted can be seen in a larger format by clicking on them.
Posted by Chuck and Anneke's RV travels at 6:21 AM

Glad to see that the best seats are reserved for us second class citizens somewhere!