A hectic couple of weeks have kept me from the blog.  This included a whirlwind trip to San Antonio to help our youngest daughter, Katie,  house hunt for her upcoming move for her next assignment at Randolph AFB.  Living in Florida, we are pretty well adapted  to summer heat, but even so, it was very hot in San Antonio.  Luckily, she was able to find a house she liked.  We were also able to get in a small amount of sightseeing.  The Air Base itself has a number of historic buildings, including its centerpiece, the water tower at the center of the circle that you see as soon as you enter the main gate. 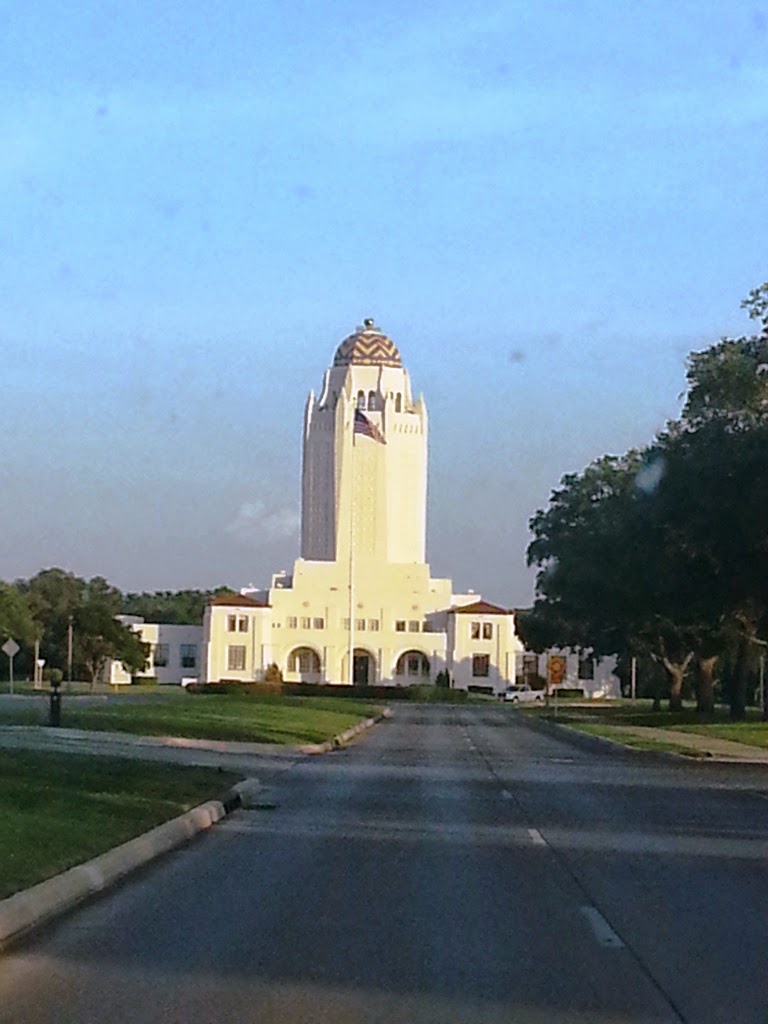 No trip to San Antonio is complete without at least one trip to the downtown river walk area. 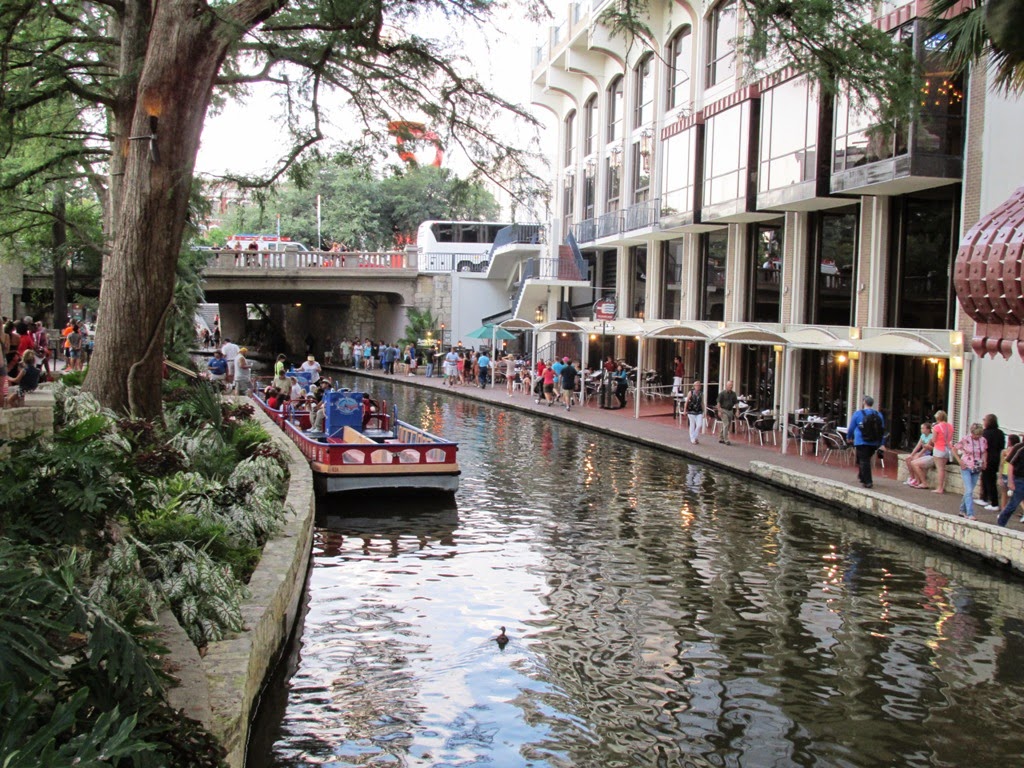 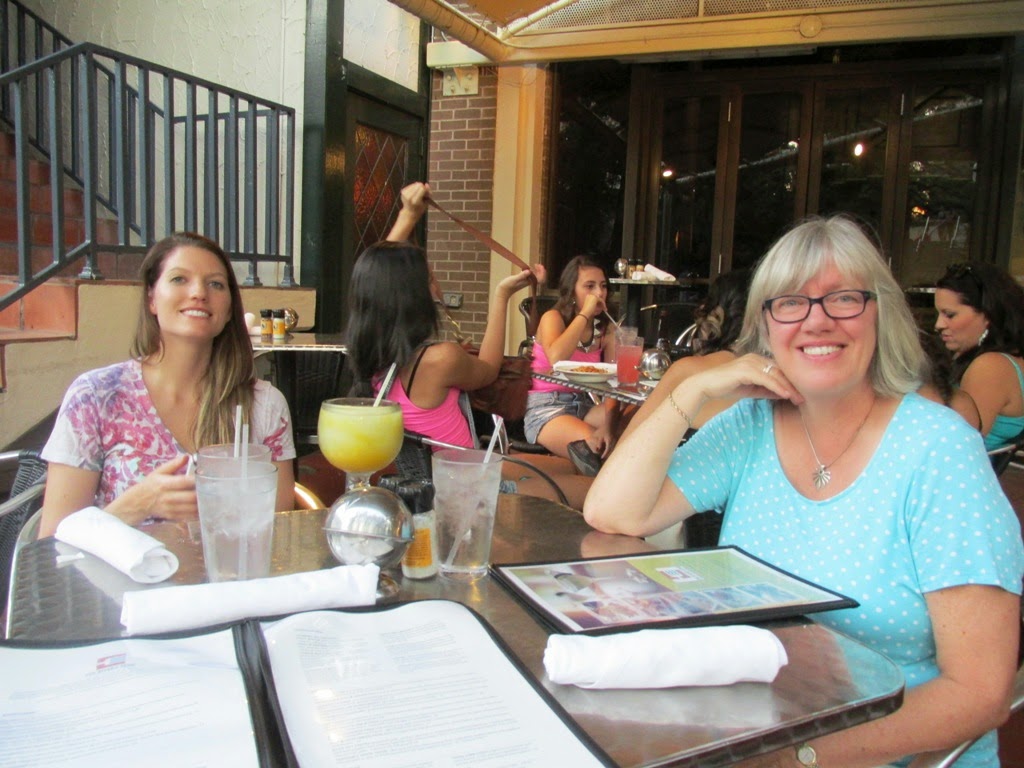 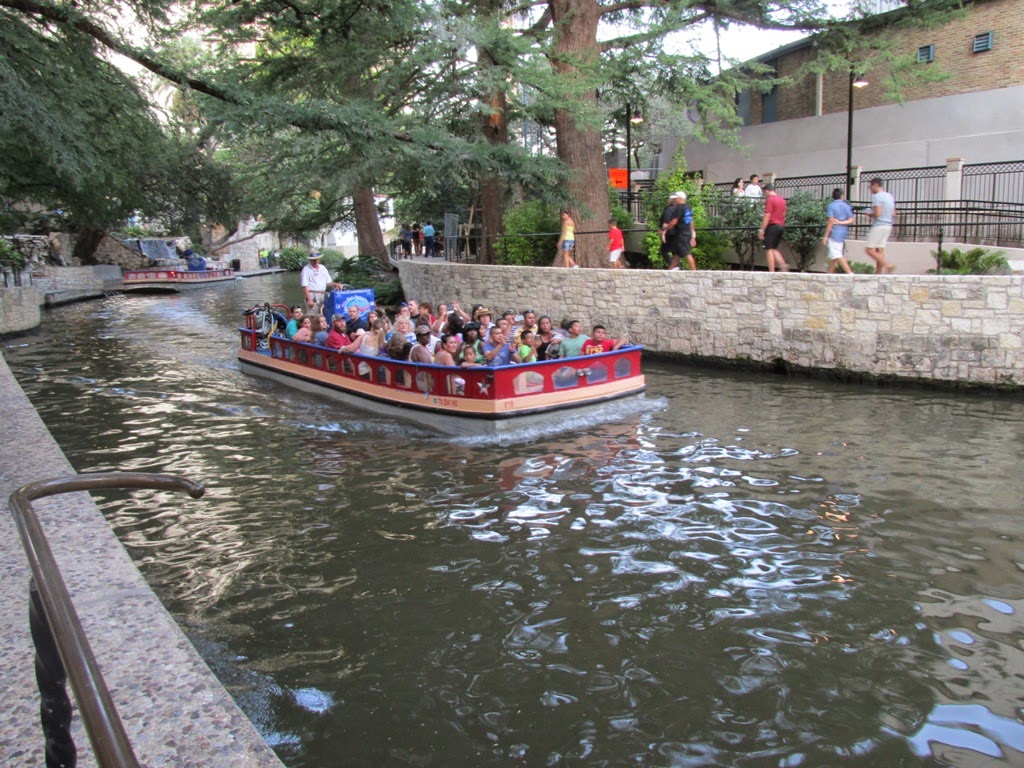 Now back to finishing the RV trip north where I left off.

After completing our planned Ohio visits, we decided that we wanted to travel the entire length of the Natchez Trace Parkway.   We have made stops along parts of the parkway in the past, but wanted to travel the entire 444 miles from Nashville to Natchez.  The parkway travels along the Natchez Trace with numerous spots along the way to absorb at least some of the nearly 10, 000 years of history while the trail  was in use.  We started at the northern end and headed south.  The parkway itself reminds me quite a bit of the Colonial Parkway in VA.  It does not allow commercial traffic  nor advertising  and the only signs to be seen are limited exit and entrance markers.  It is a scenic and relaxing drive, but to really enjoy the experience, you have to have some appreciation for the history of the trace. 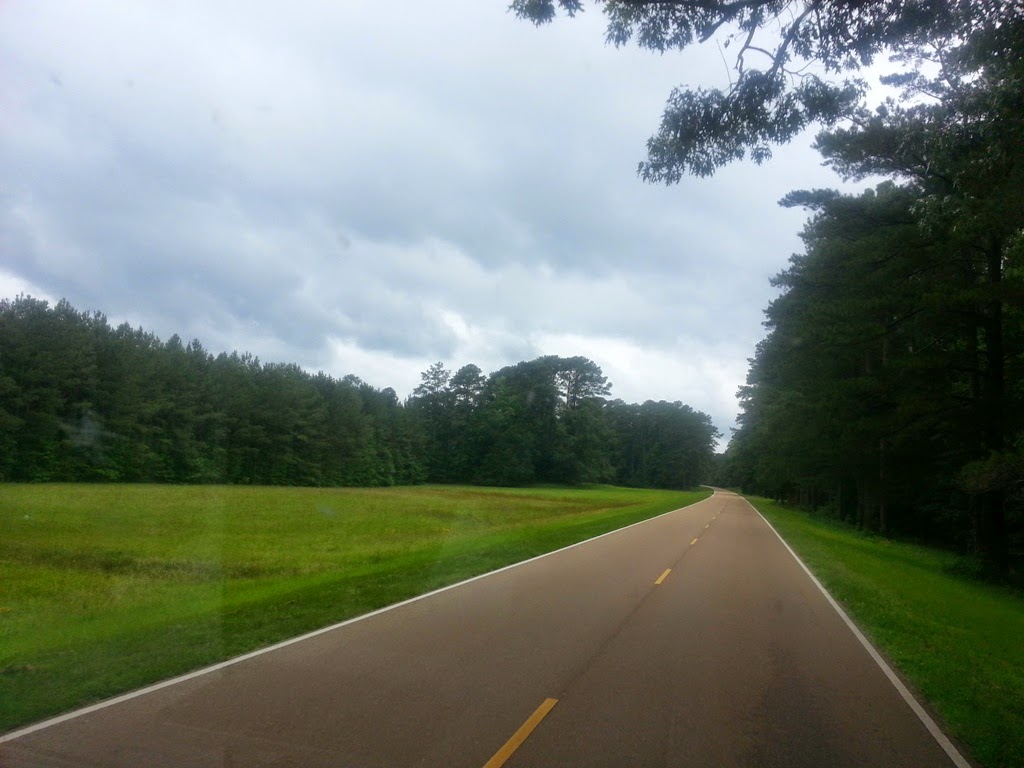 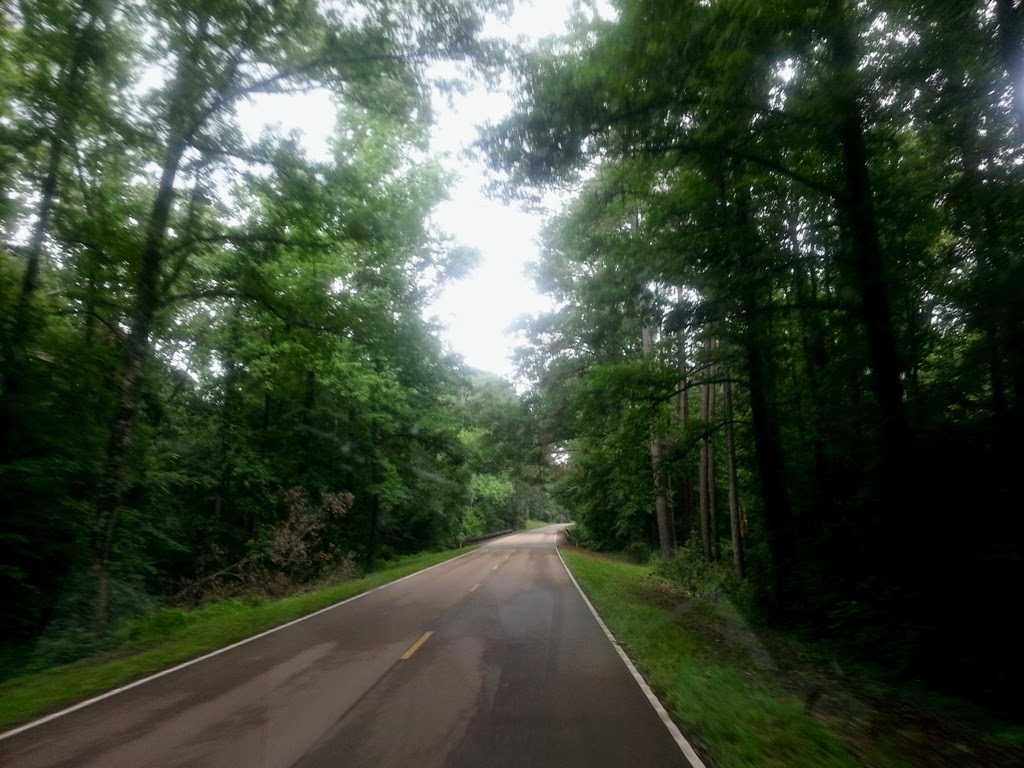 The top site on my list was the gravesite of Meriwether Lewis.  After reading the Lewis and Clark diaries, this was a must see for me.  Lewis traveled the Natchez Trace after leaving New Orleans for a trip to see the President of the United States.  He arrived at the Grinder's Inn on 11 Oct, 1809 to remain overnight.  He was found dead the following morning.  There was a good deal of mystery and uncertainty about his death.  The circumstances remain unclear today.  Two of the main theories are: that he committed suicide because of numerous personal problems; or he was murdered to obtain the documents he was carrying to the president.  There was some speculation that these may have involved his position as Governor of the New Orleans Territory. We will likely never know the truth of his death.  He was 35 years old. 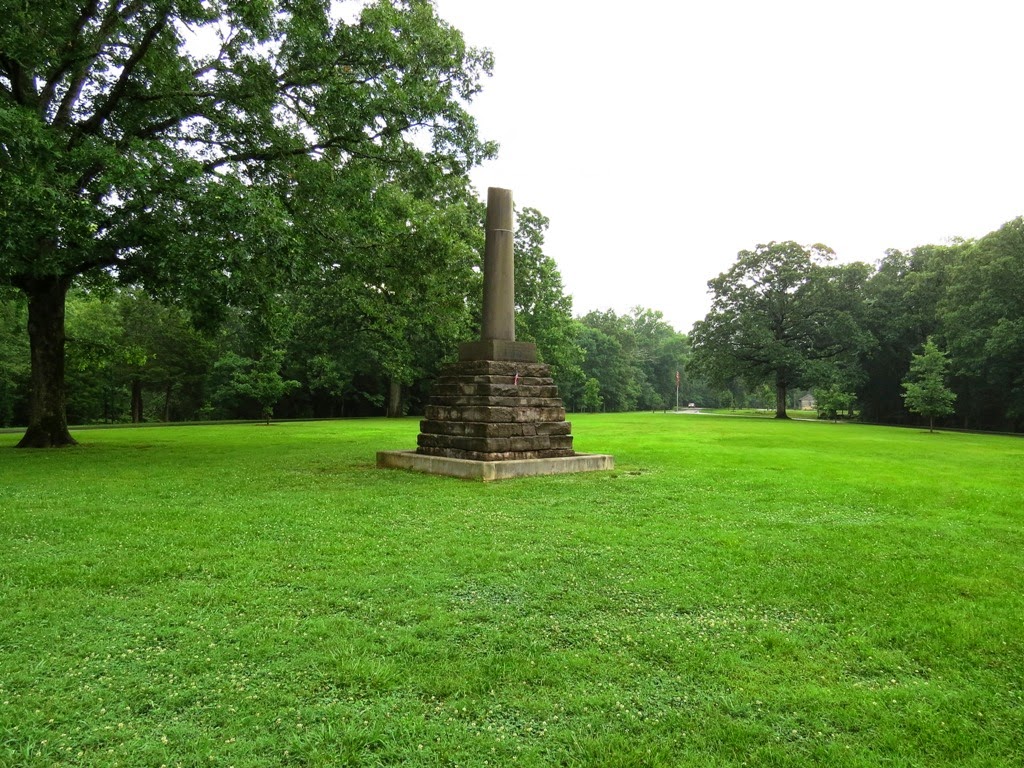 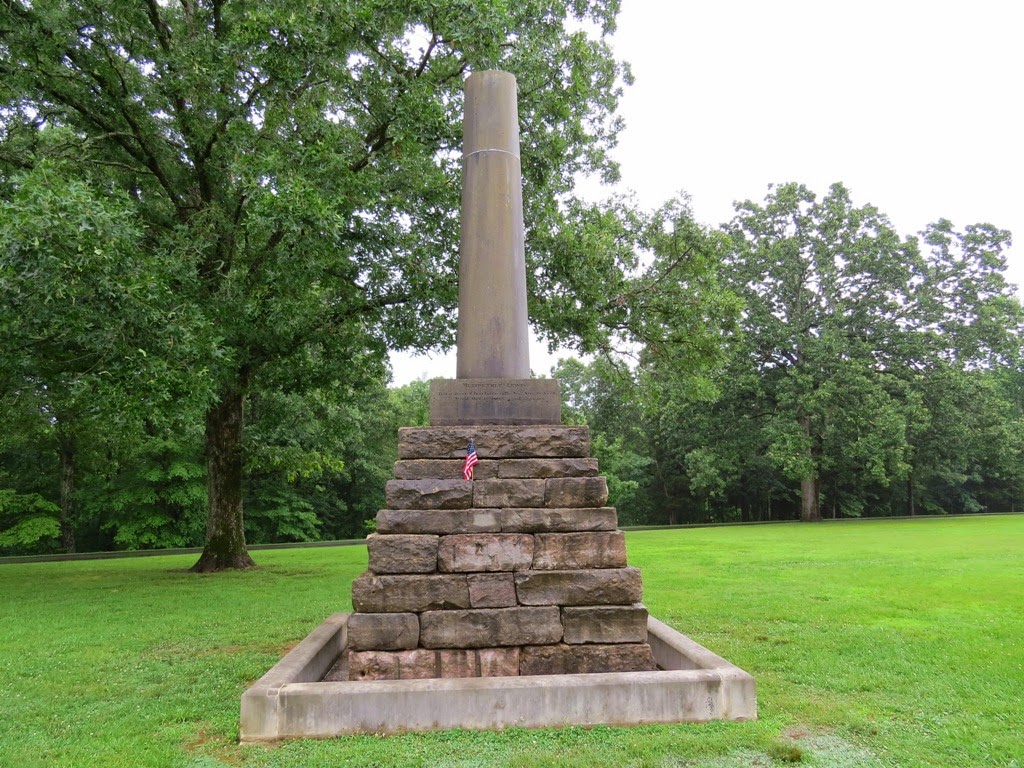 There are many places along the parkway to see and hike the original Natchez Trace.  Among the most popular of these is a section known as the sunken trace.  Here you can see how deep into the earth's surface the trail has been worn over the many centuries that man and animals have traveled along the trail. 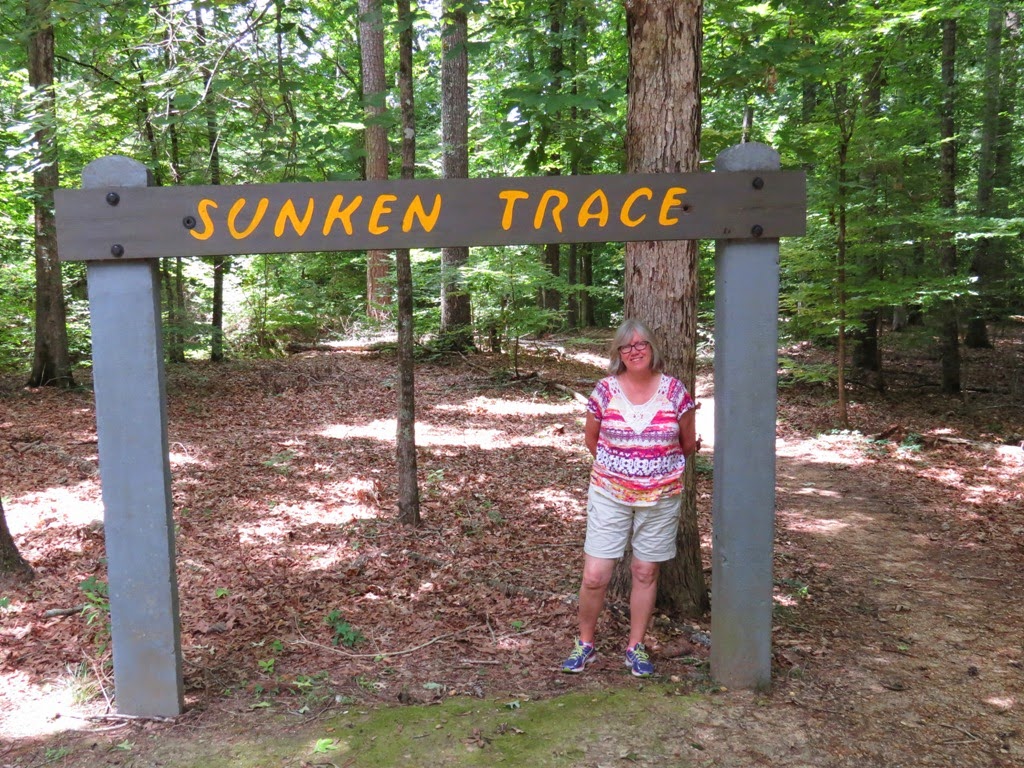 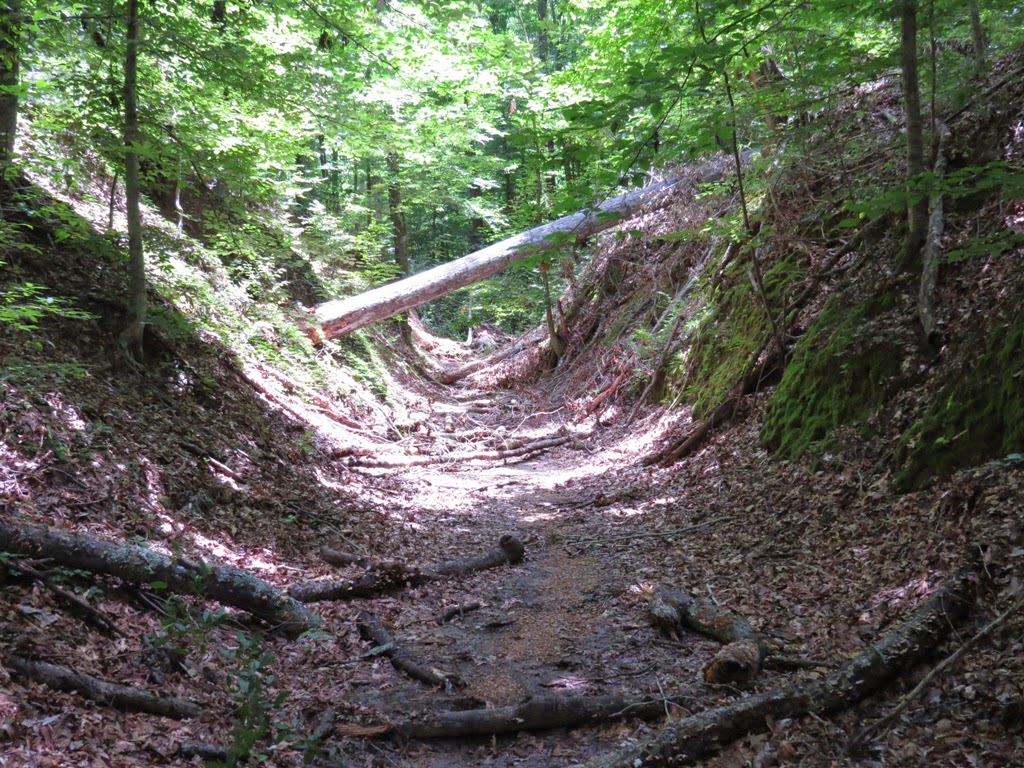 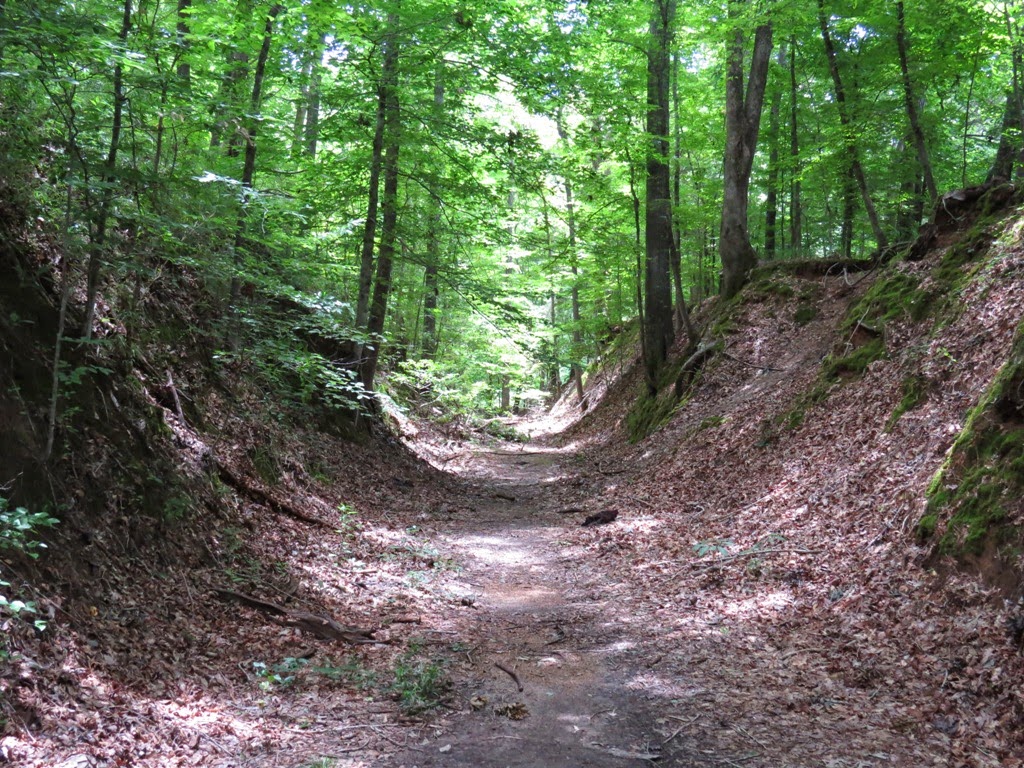 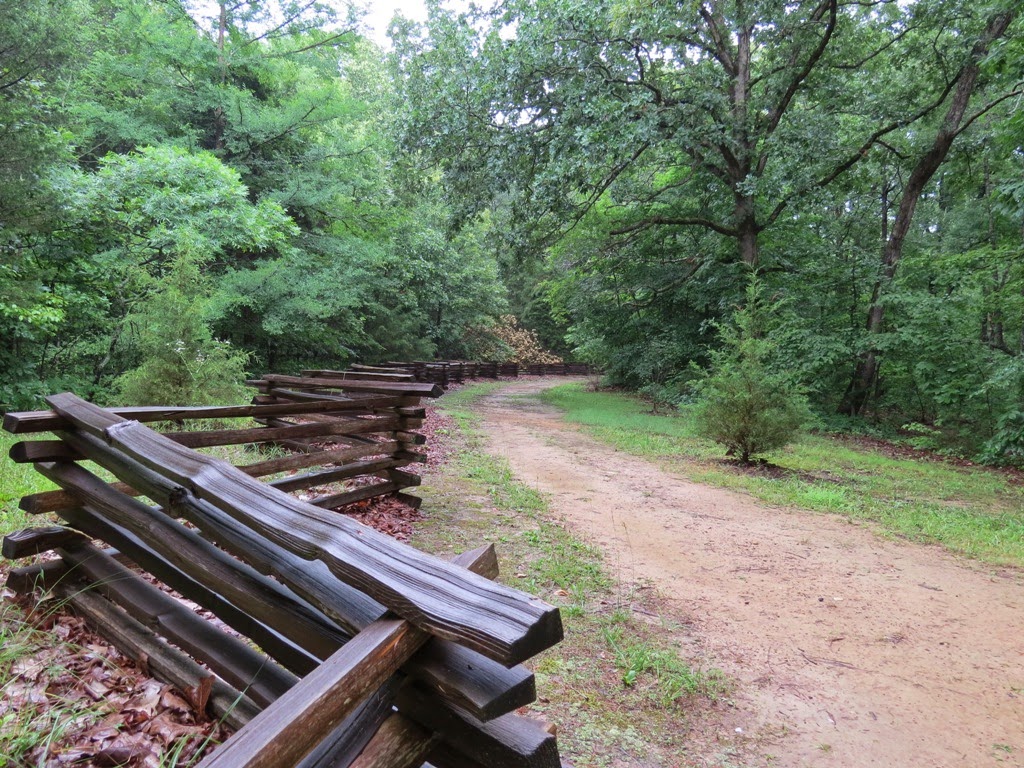 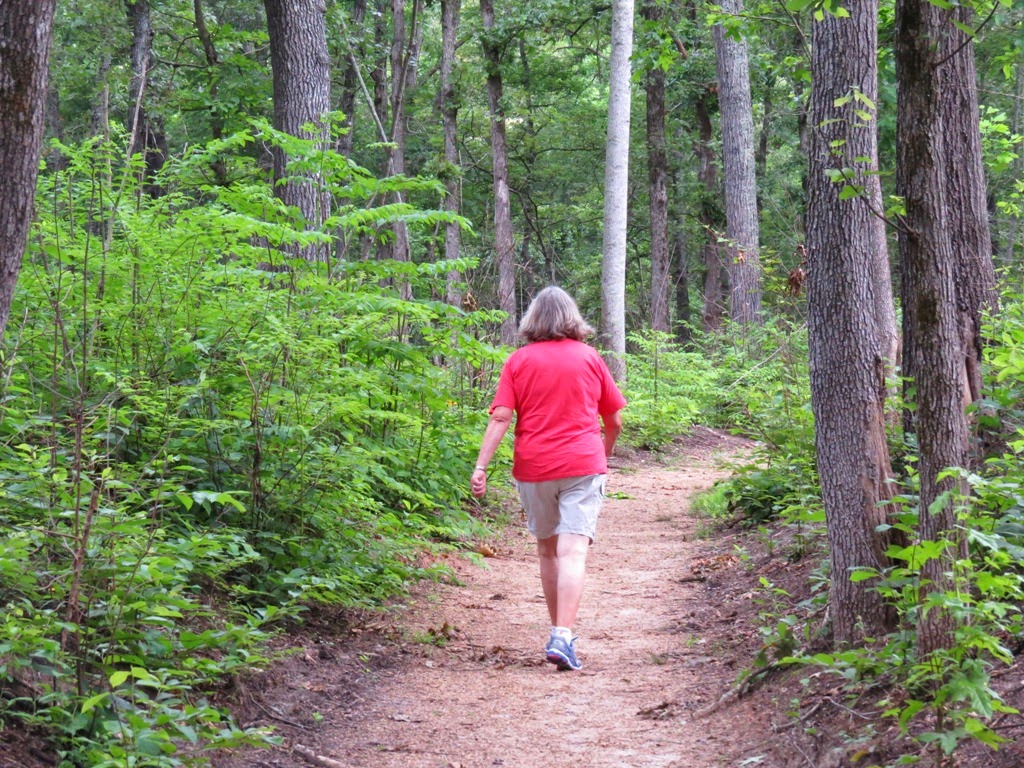 Another interesting stop is the gravesite of 13 unknown Confederate soldiers.  It is not known how they died or exactly when.  It is possible that there were more dead here that were later moved. It is thought that some of them may have been originally identified, but since the original markers were long since gone ,  no one can be sure.  A great fear among Civil War soldiers was that they would be so injured during battle that many carried letters or other materials that would help identify them after they died.  It is also possible that these materials may have been removed from these men.  In 1940, Senator Bilbo arranged for marble headstones, but they were stolen.  The current markers were put in place by the National Park Service.  The markers are placed backwards, so that travelers on the trace might read them. 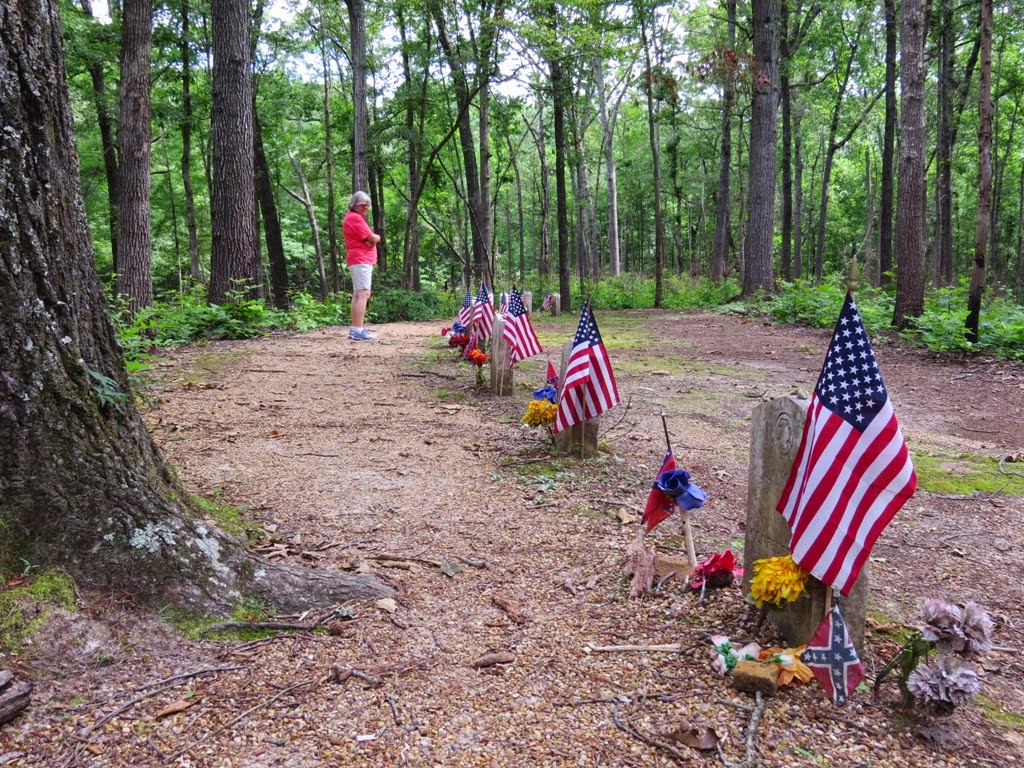 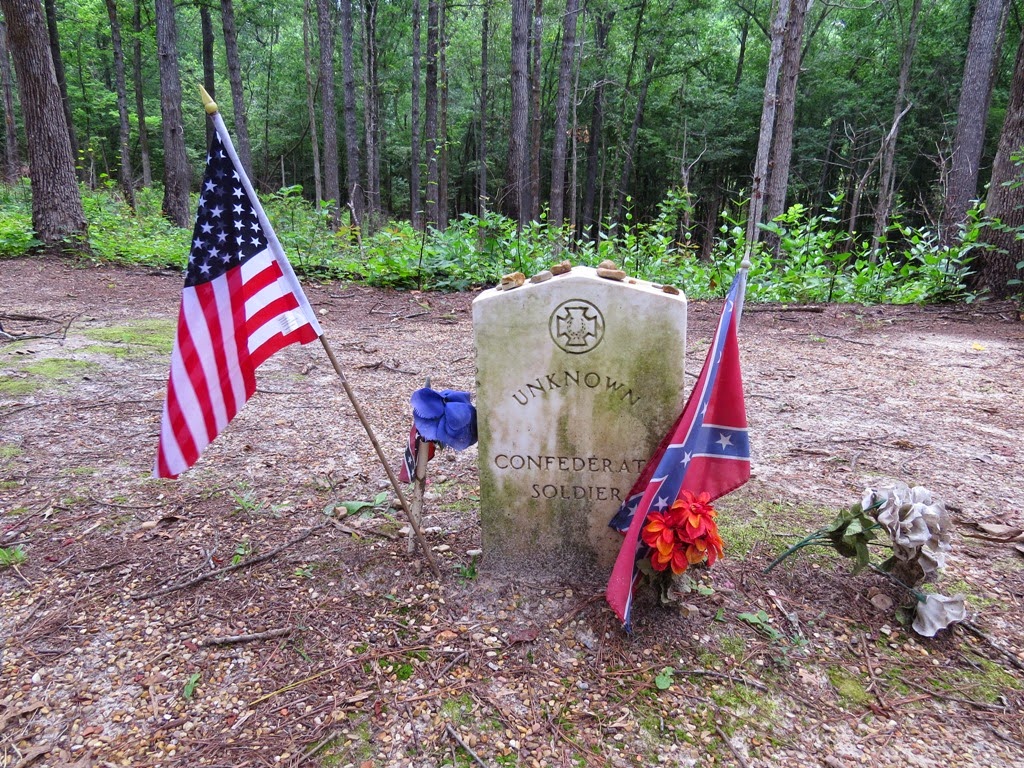 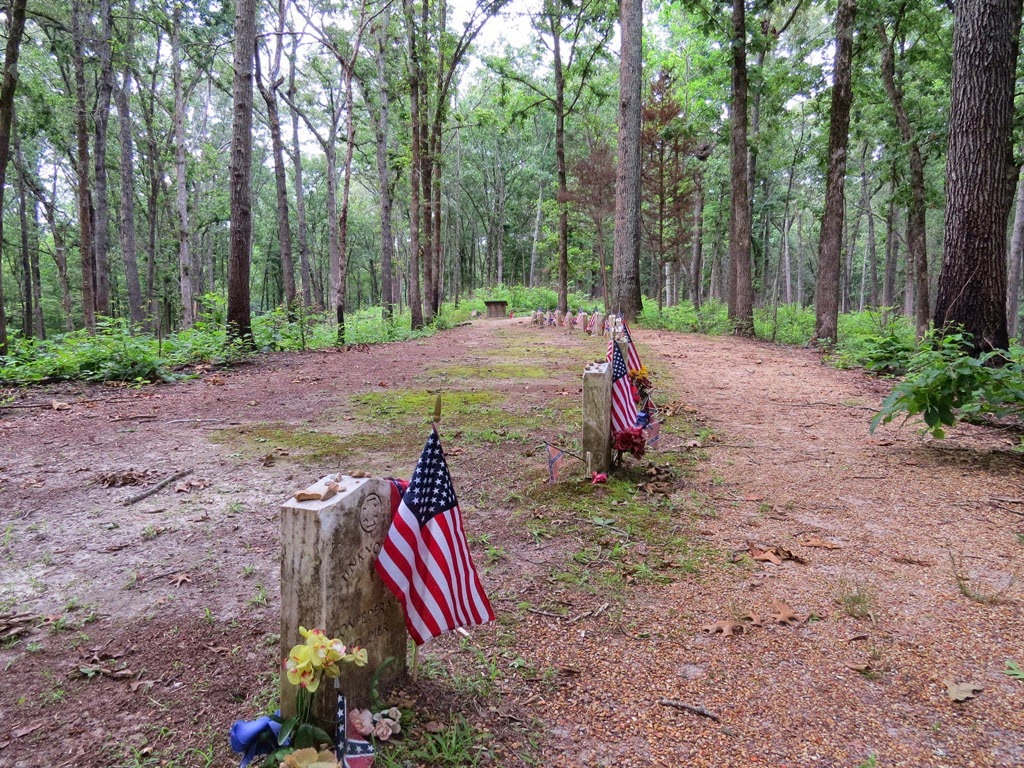 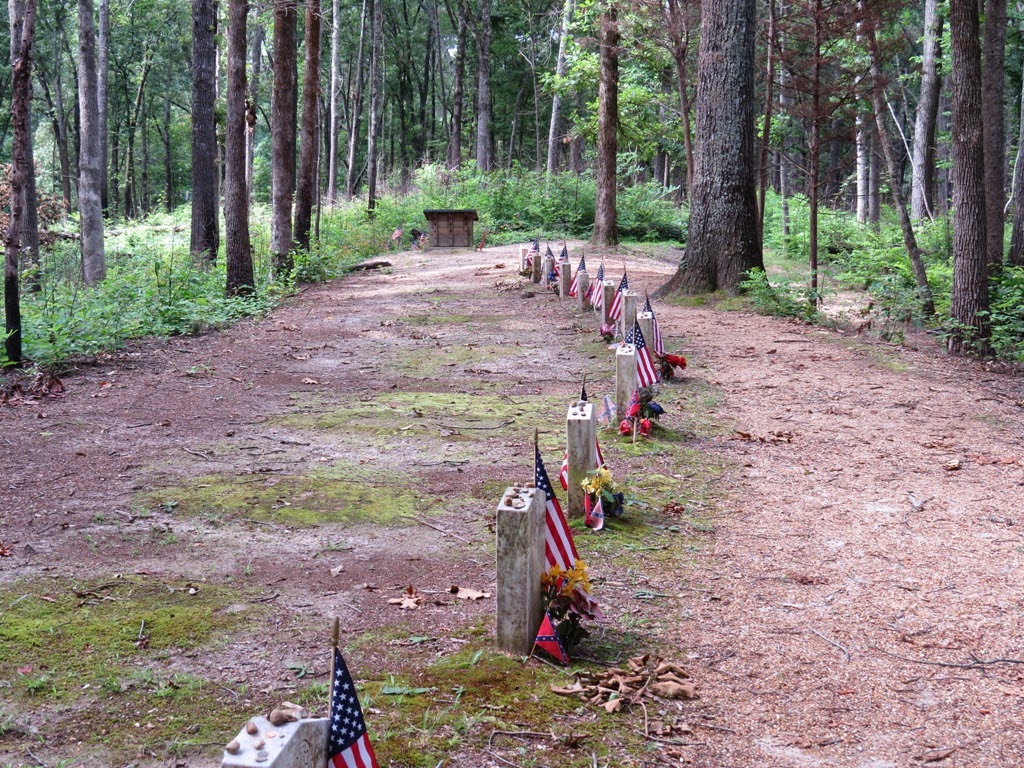 There are  several stops along the way to observe the Indian Mounds sites located along the trace.   The largest are the Pharr mounds which  have eight large dome shaped  burial mounds covering 90 acres.  They were built between 1-200A.D. 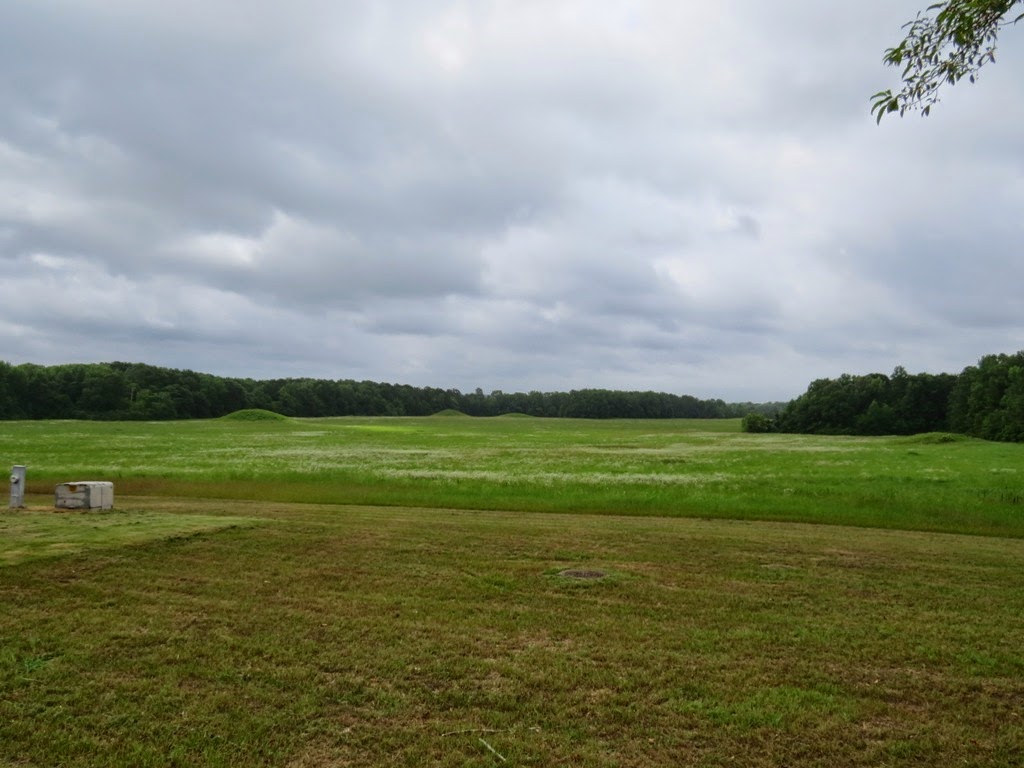 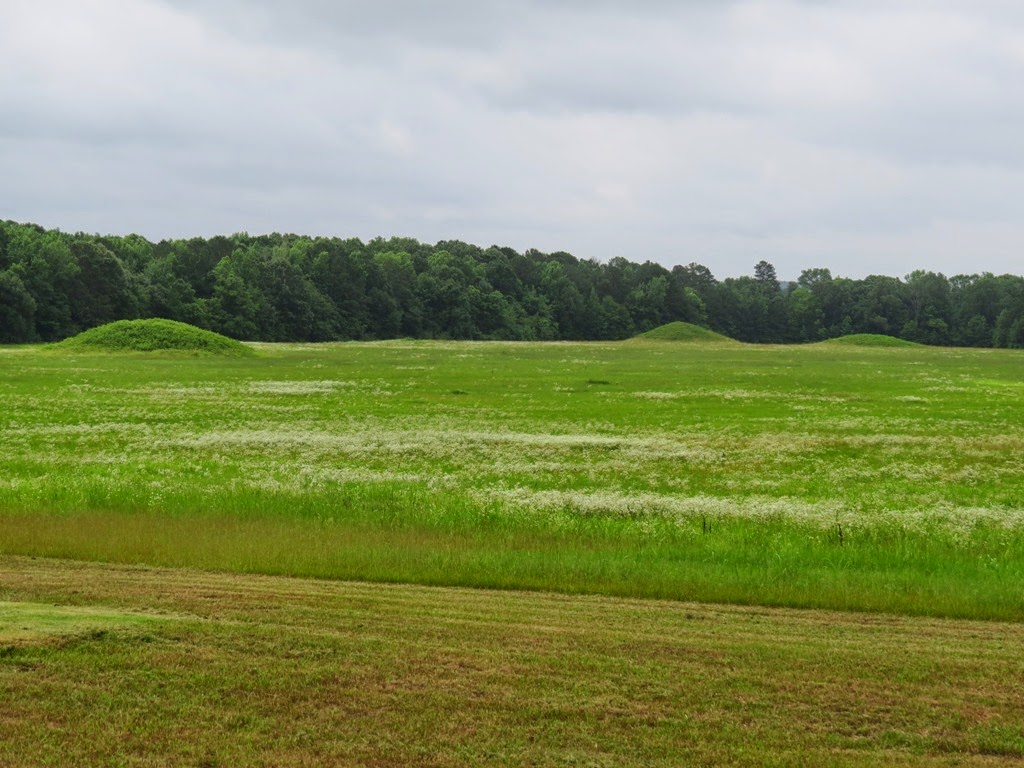 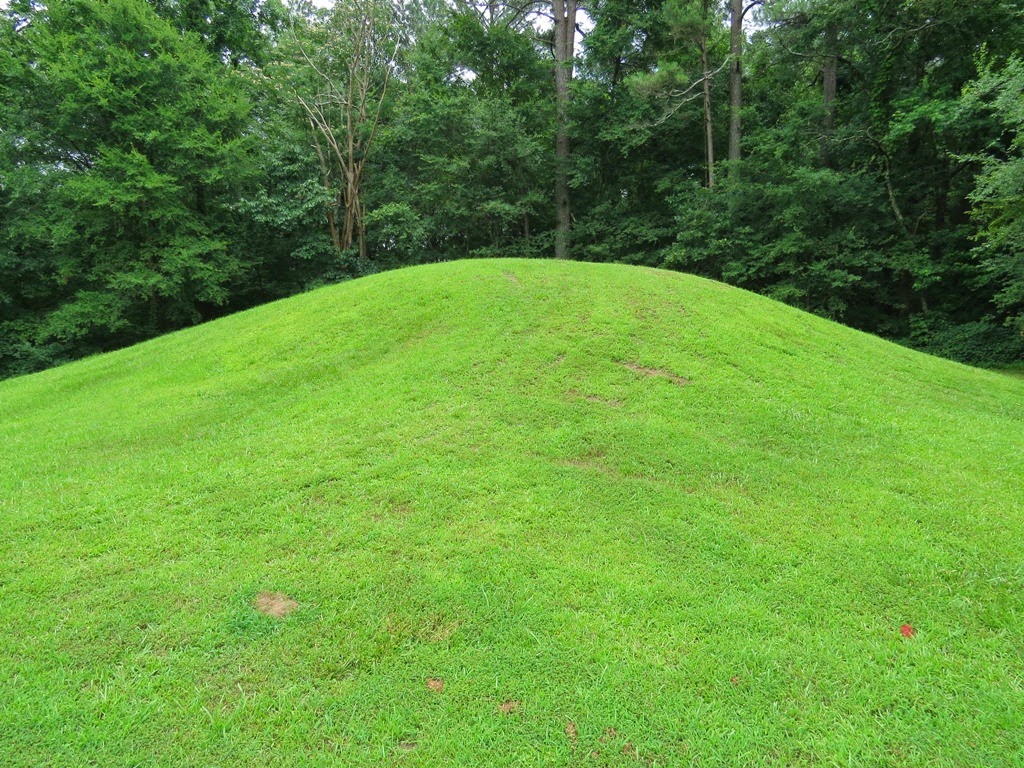 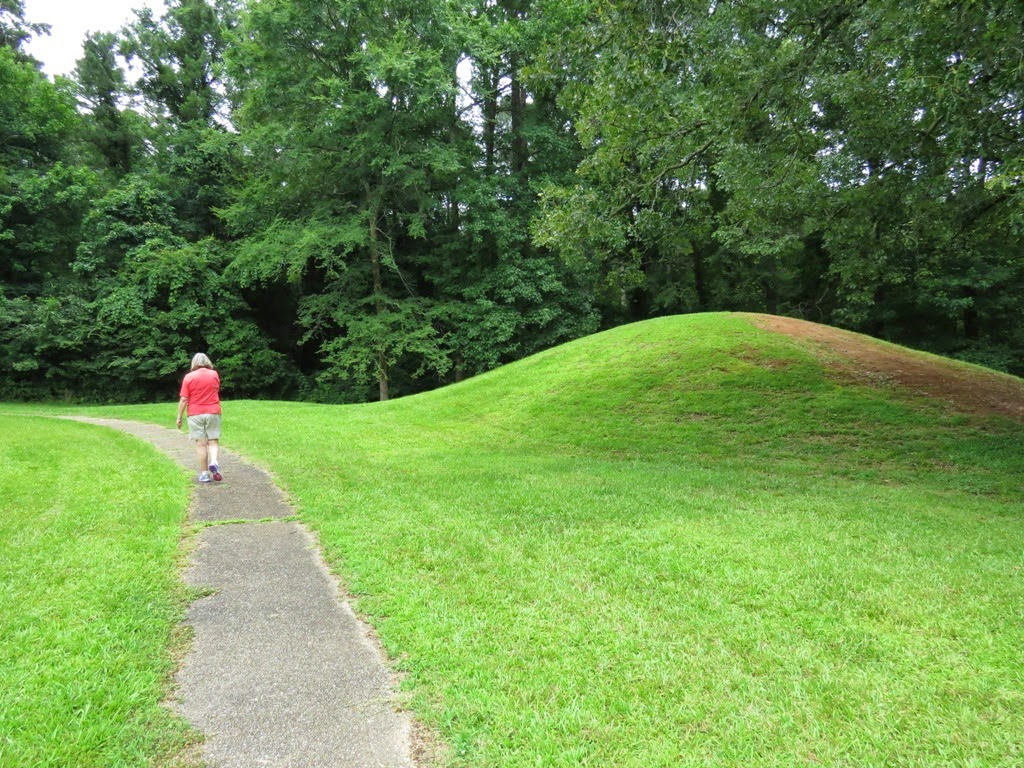 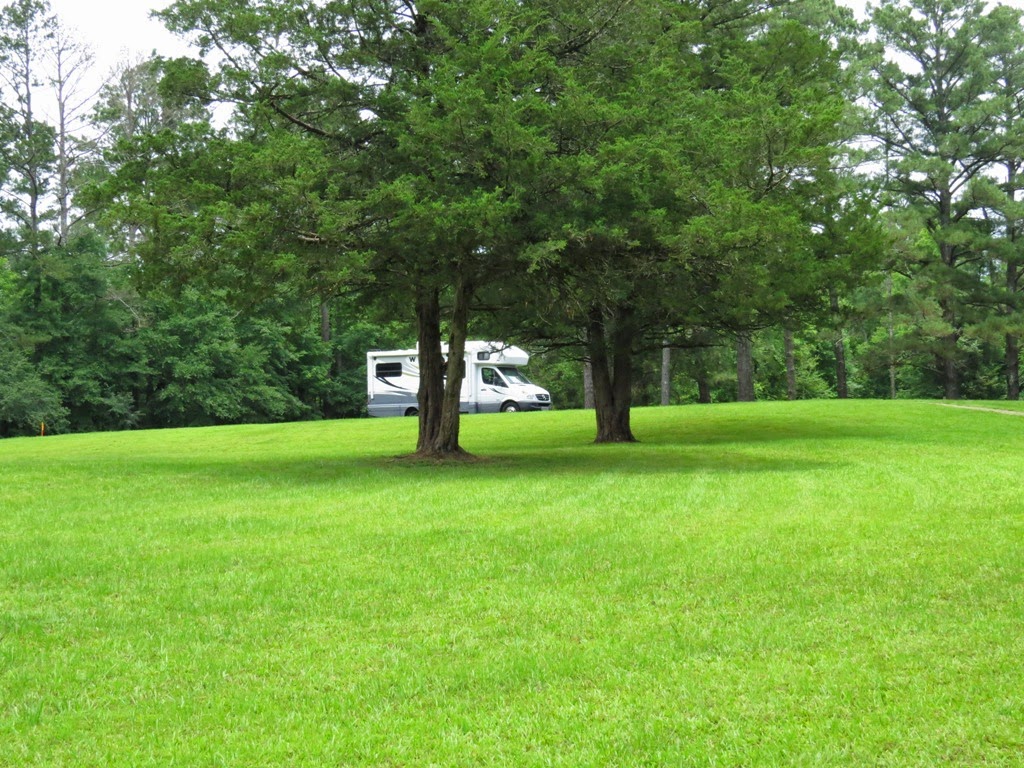 Next time more about the trace and surrounding areas.

Posted by Chuck and Anneke's RV travels at 7:59 PM

We did the Natchez Trace a few years ago and really loved it. It took us at least 5 days to a week to complete the whole thing, taking several days at each of the campgrounds to relax and to hike some of the nearby trails. Love that the road is limited to passenger vehicles and RV's and that there is a nice "low" speed limit so that you can relax and enjoy the scenery as you drive.

I loved your post today. I had so hoped to drive the entire Trace last year but circumstances kept me from it. I really hope to see it some day.

The Trace is on our list, even more so after your review.

What a great post!!! Your photos are lovely. Thank you so much for sharing, and I am so glad that your dear granddaughter, Victoria, enjoyed the Manatee video I posted. :)

We followed the Trace also. I just think it is amazing that they still put flags and decorate the grave sites. Glad someone remembers those that dug a path for us to enjoy.

Interesting post. I liked the pictures of the sunken trace. Something you don't think about.

We drove a small portion of the Trace while we were in Red Bay AL, at the Tiffin plant. Just that small amount gave us the desire to travel the entire length.

Like Gypsy, I too had planned to drive the Trace last year, but it wasn't to be. Can't wait for the rest of your tale.

We've only touched a small part of the Trace. Looks like we need to do more.

The Trace is on my "Must See" list. So much history, so little time!

Interesting that the Confederate soldiers graves have the American flag over them and not the flag under which they served. Maybe too controversial?

I know what you mean about being hectic. It's been the same way for me and difficult to get back to blogging.

I've always wanted to do Natchez Trace. It's still on my list.

Me too. Really want to drive the entire Trace do I am keeping this great post and will the next one too. Glad you could help your daughter find her house. Would love to see a picture of it.

Very interesting ... amazing to see the sunken trace ... sure had to be a lot of travelers going through the area in the 10,000 years. Thanks for the tour. I think these are first photos I've seen that gave me a sense of what Natchez Trace is all about.

What a great account of the Trace (so far) and I can't wait to hear more. We have never driven the Natchez Trace and it is definitely on our list. I'm almost ashamed we haven't since we live so close to it. Your pics were fantastic and the tour awesome!!!

That was all new info on Lewis for me. Really interesting. Some day I would love to drive the Trace. That would be an incredible journey. Thanks for the tour.