The Blue Angels- the short version


Now that the some of our government's budget management crisis has been relieved, the Blue Angels flight team is back in business.  This last week, we decided to catch their practice routine.  You can watch the show just off the flight line behind the Naval Aviation Museum in Pensacola.  We thought we would get there early and spend some time in the museum.  But like many best laid plans, when we arrived over an hour before practice began, we found hundreds of people already lined up awaiting the gate to the flight line to open.

By the time we exited the car and got our bearings, the gate was open and the crowd was pouring in.  So we followed the herd and got some great bleacher seats right on the flight line.  This should be a great show with a forecast of partly cloudy and light winds.  Our waiting period allowed me to practice my camera shots on various other aircraft that were taking off from the field.  In-between several volunteers from the museum entertained us with various stories and facts. 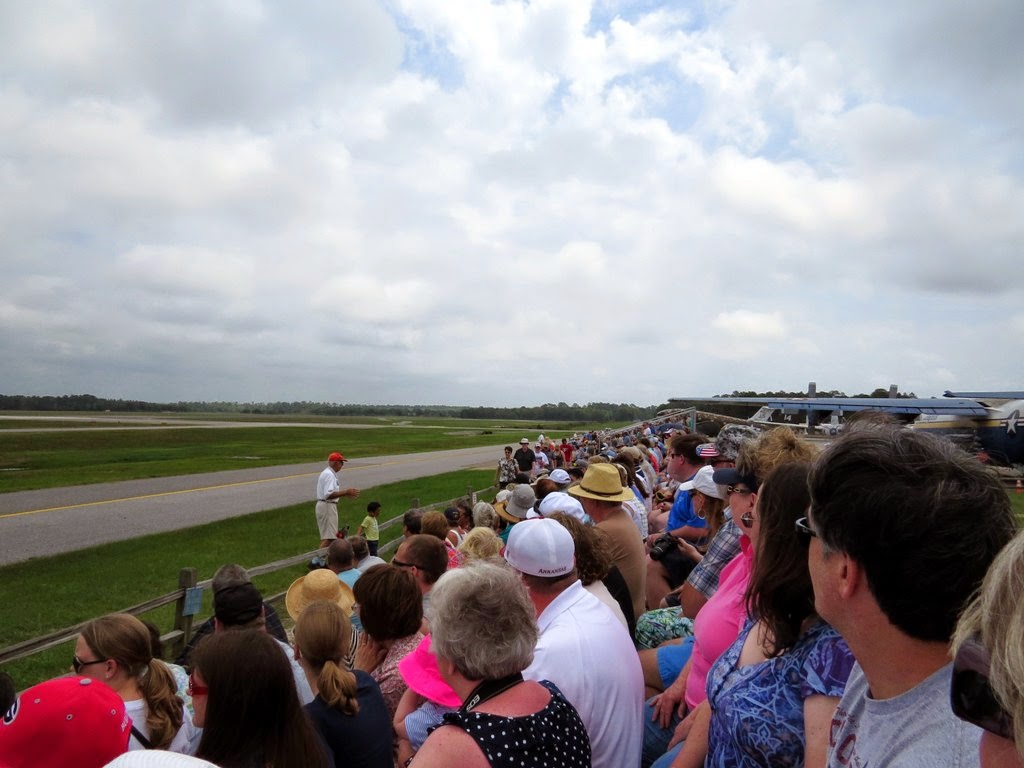 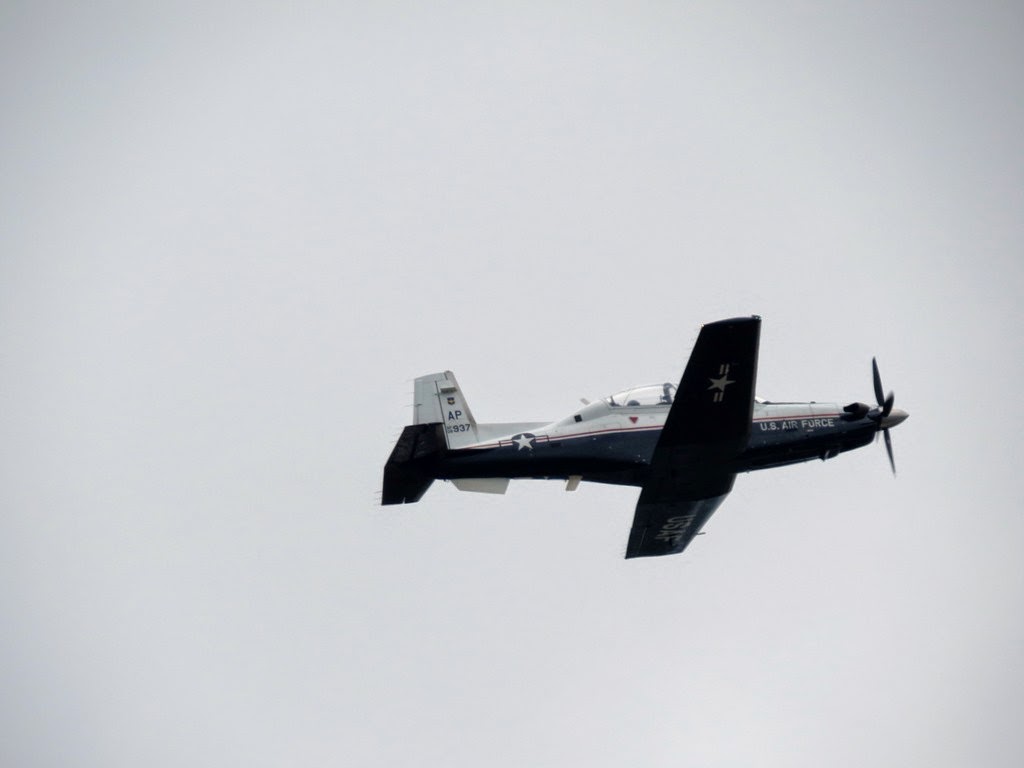 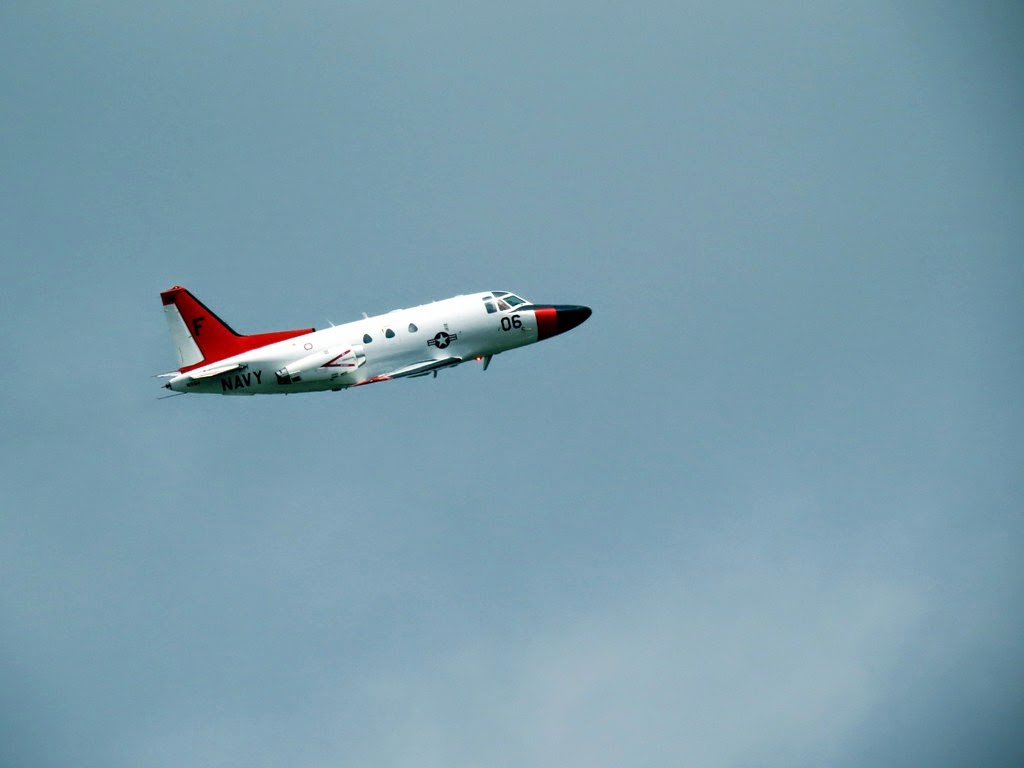 Finally, the time arrived and on the dot, the Blue Angels started out onto the runway.  I could not help but notice that the wind had picked up and the clouds were building.  They took off and did several formation passes and a single dual head-on maneuver.  Then 12 minutes into the routine, they suddenly appeared off the end of the runway and landed and taxied by us.  They were forced to cut short their practice and our entertainment due to increasing low cloud cover. Almost all off their show formations require visual clues and th e ability to climb high at steep angels while seeing the horizon and each other.  Bottom line is low clouds and high speeds mean very high risk.  So, as they went by, everyone waved and cheered and likely vowed to come back for another go, hoping for better weather. 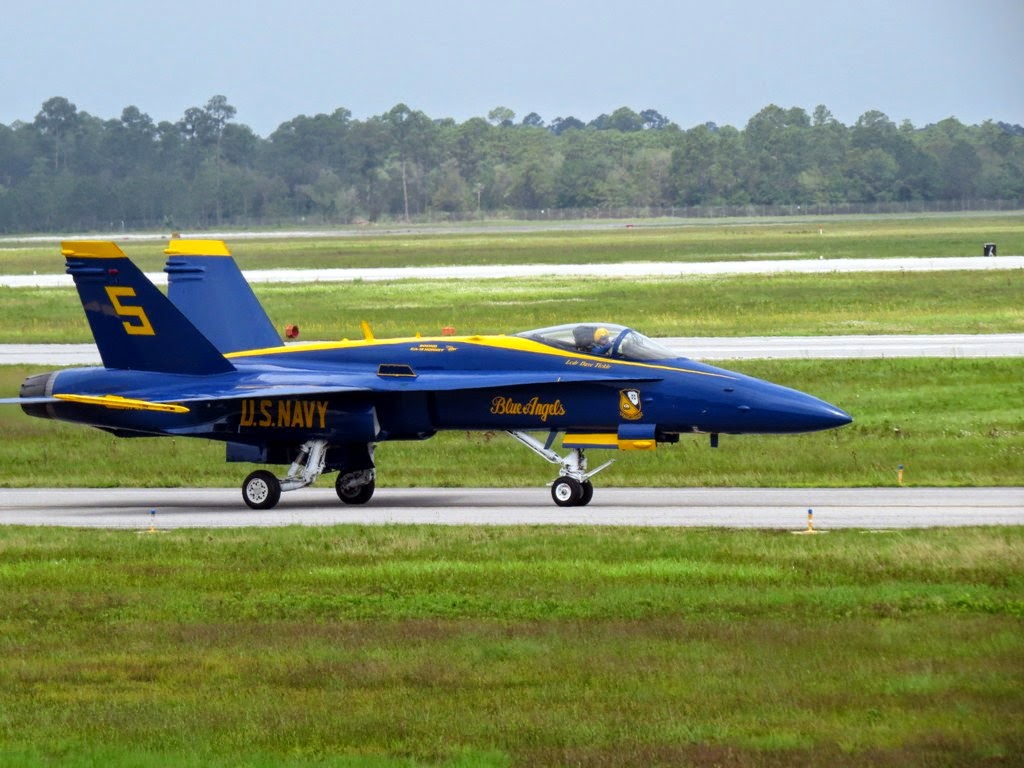 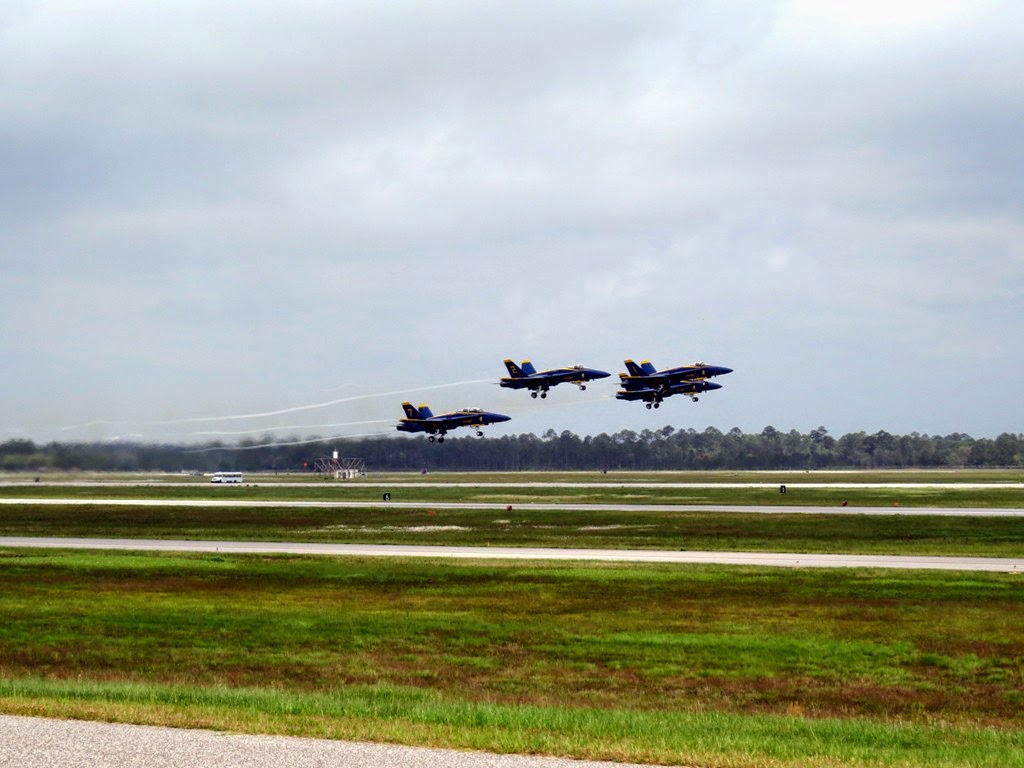 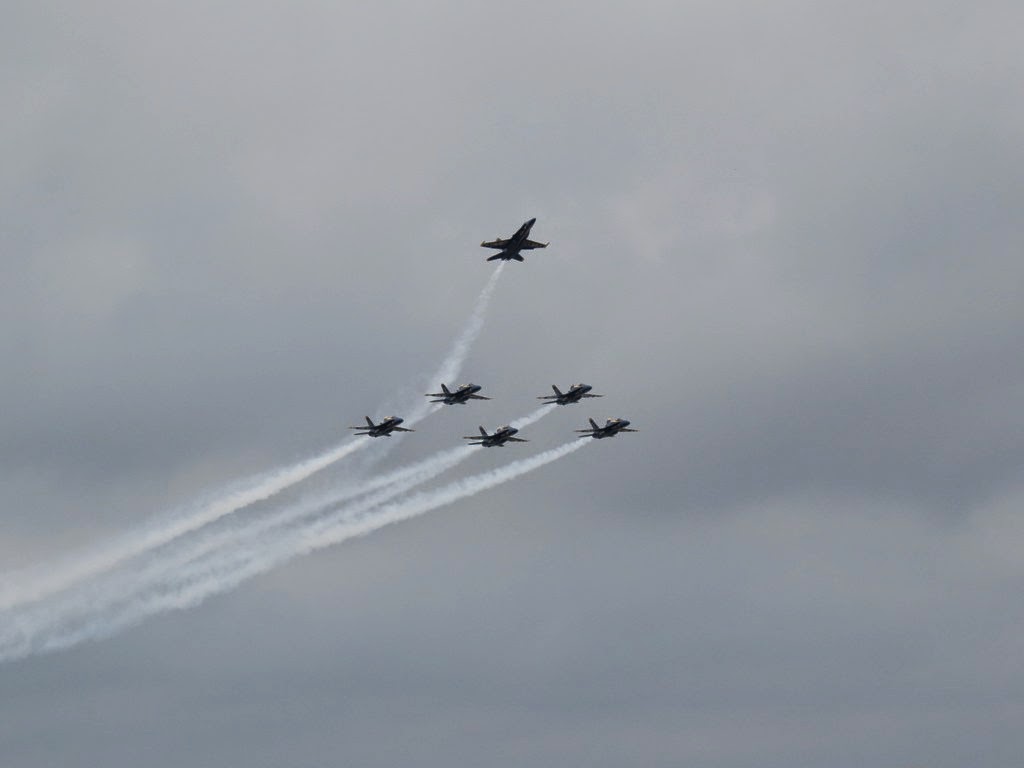 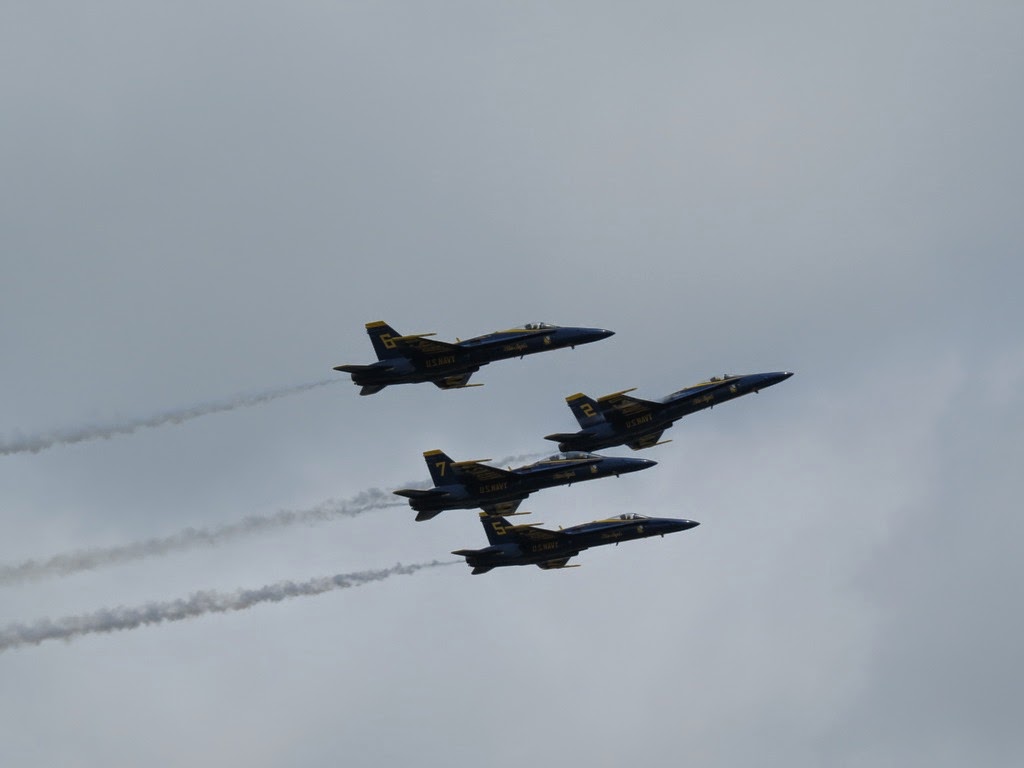 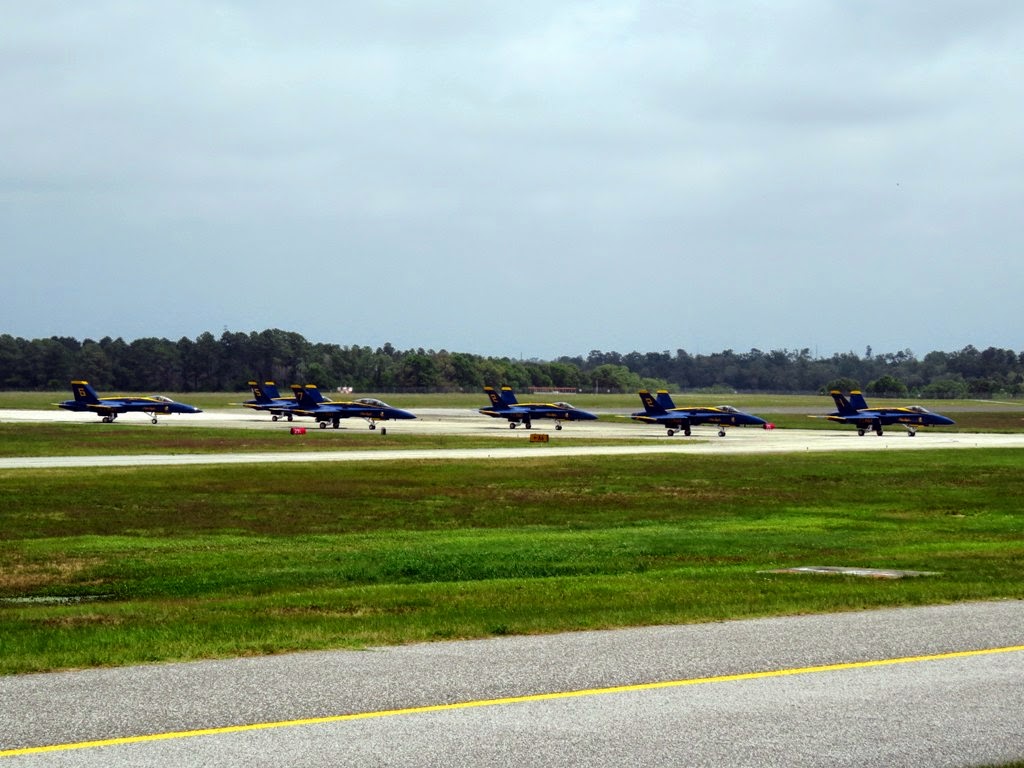 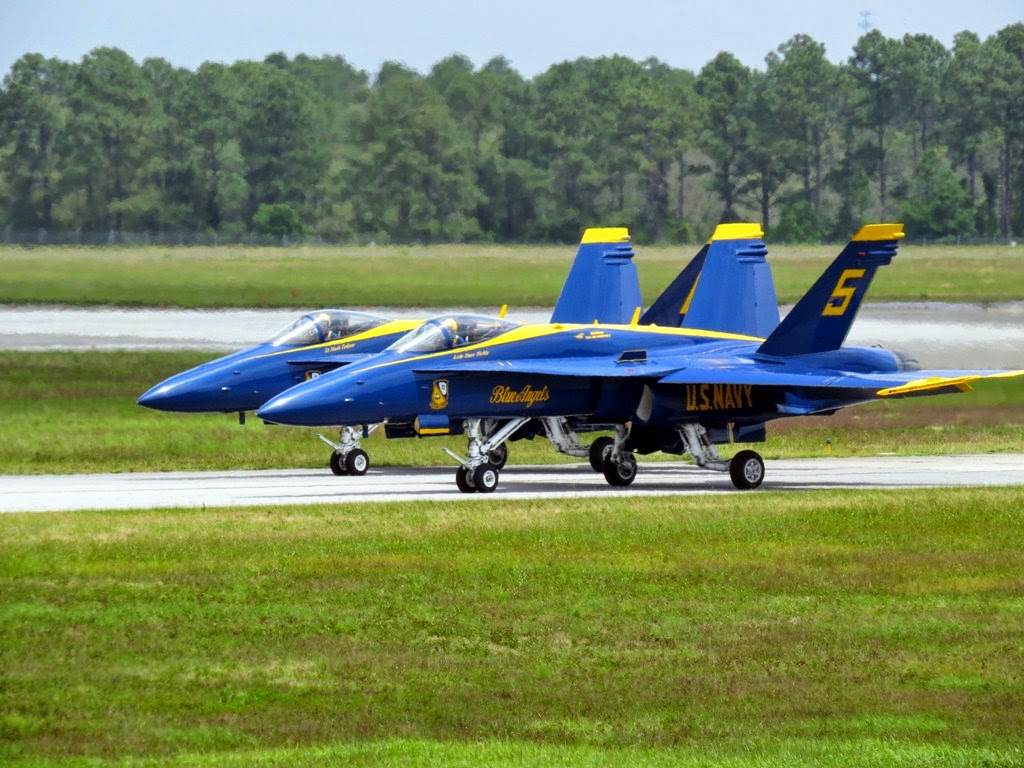 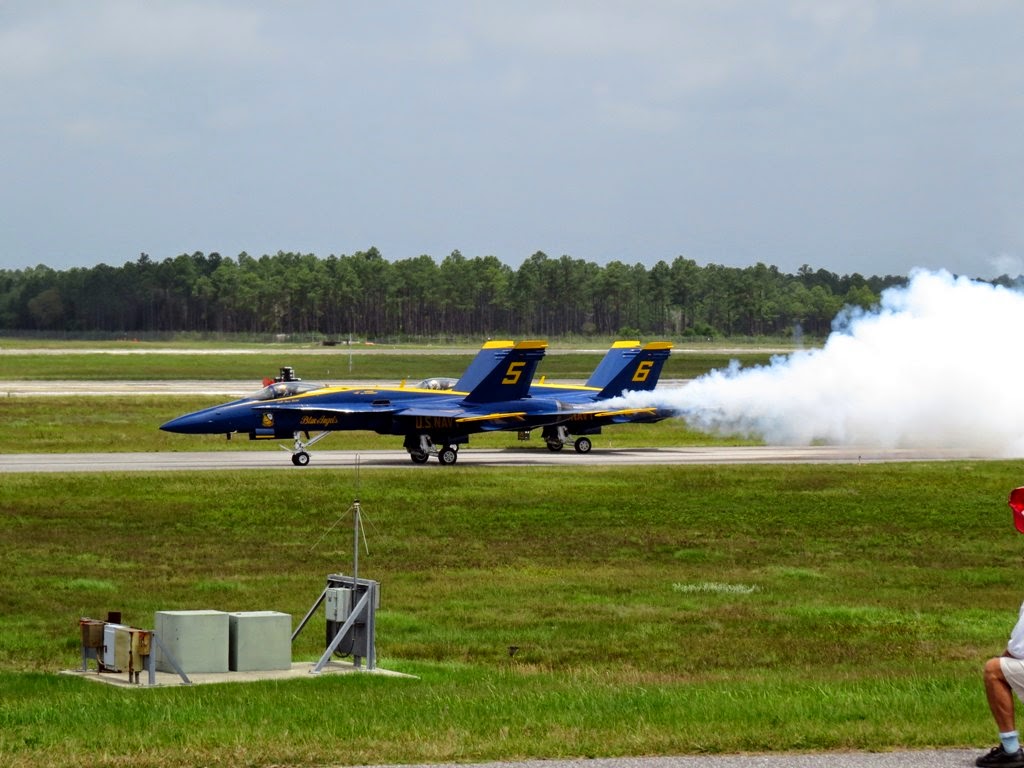 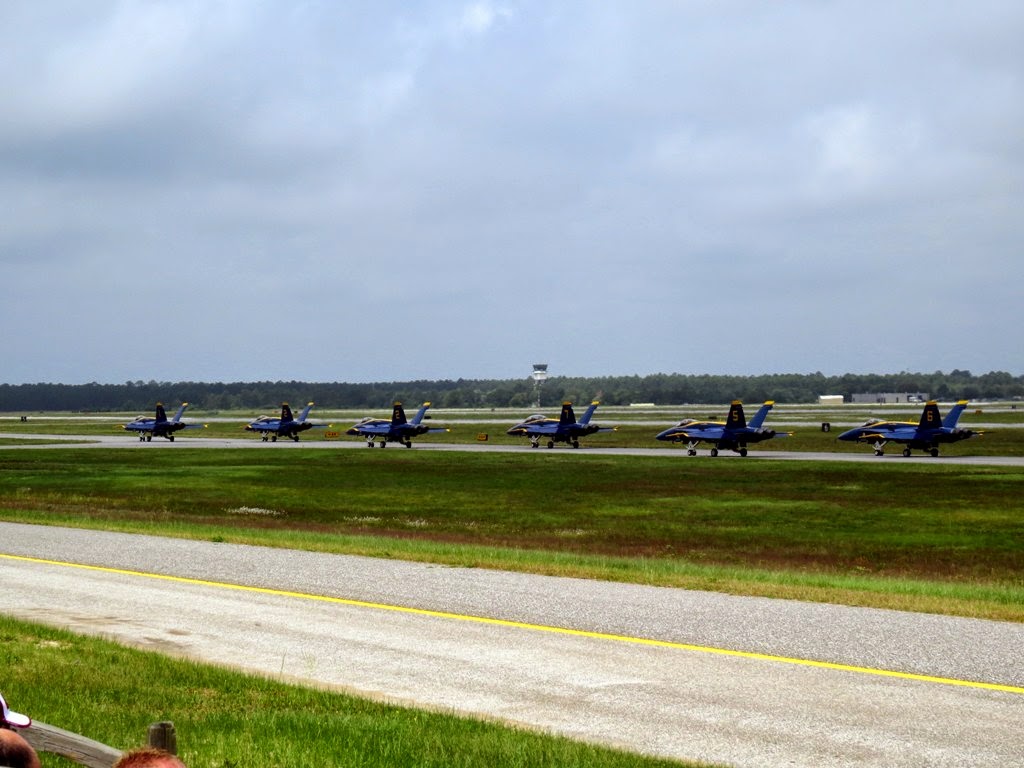 After leaving the flight line, we made a quick stop in the museum.  It has excellent exhibits and lots of history. However, we prefer to visit when there are not several thousand disappointed Blue Angels fans wandering around. 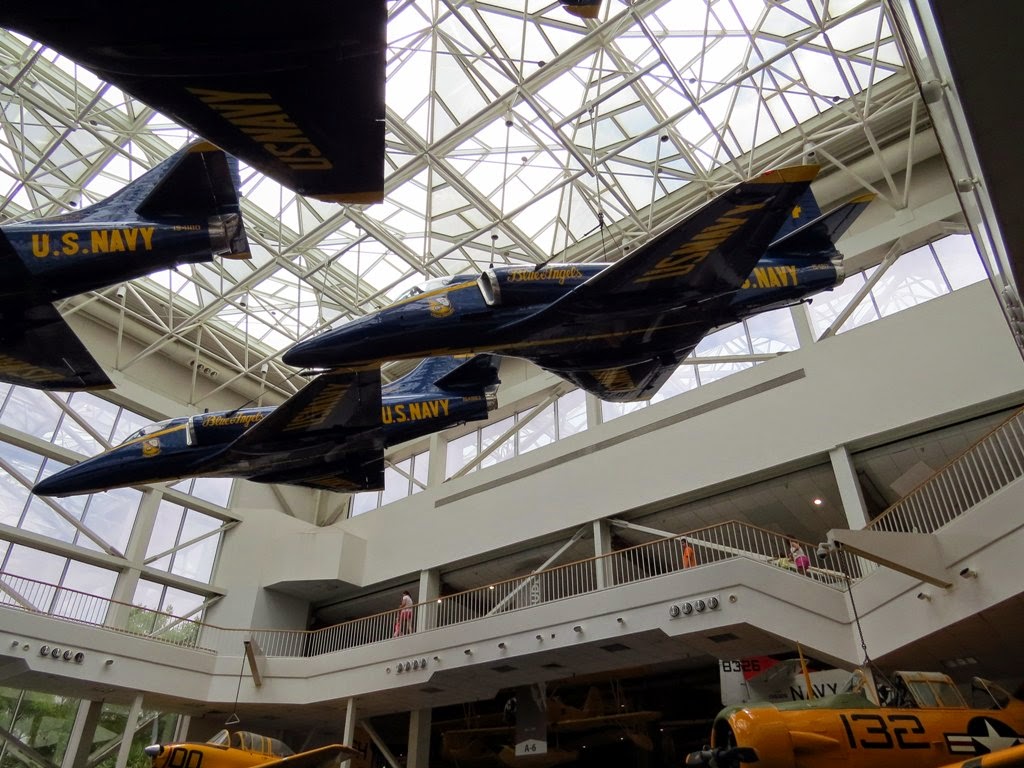 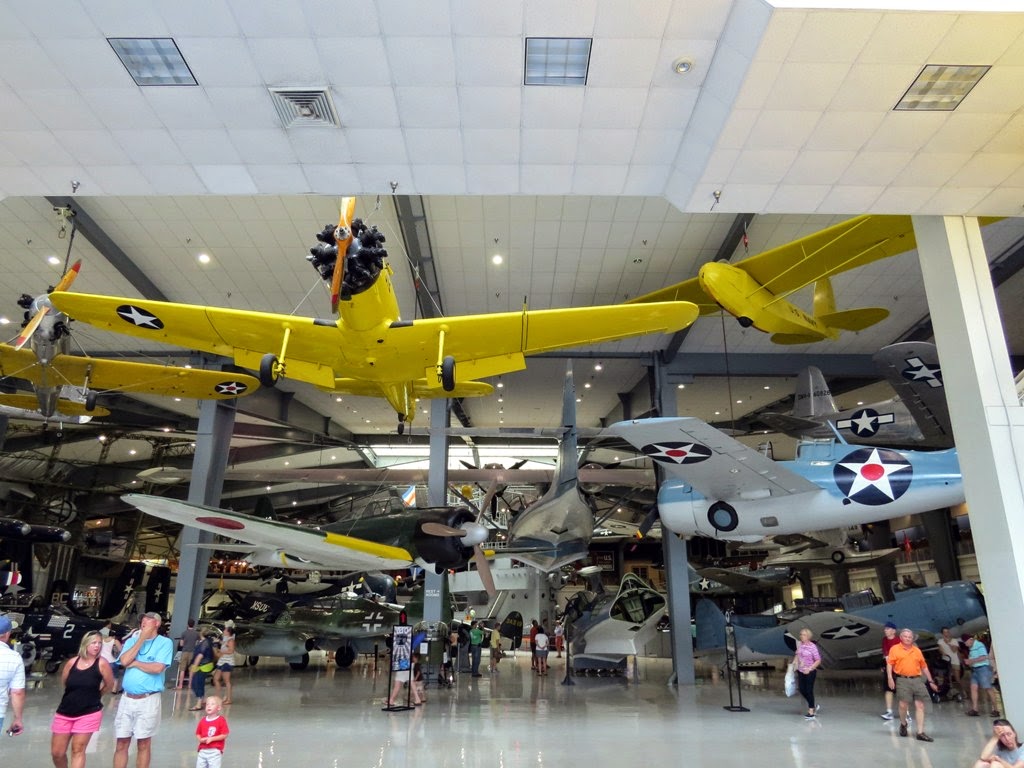 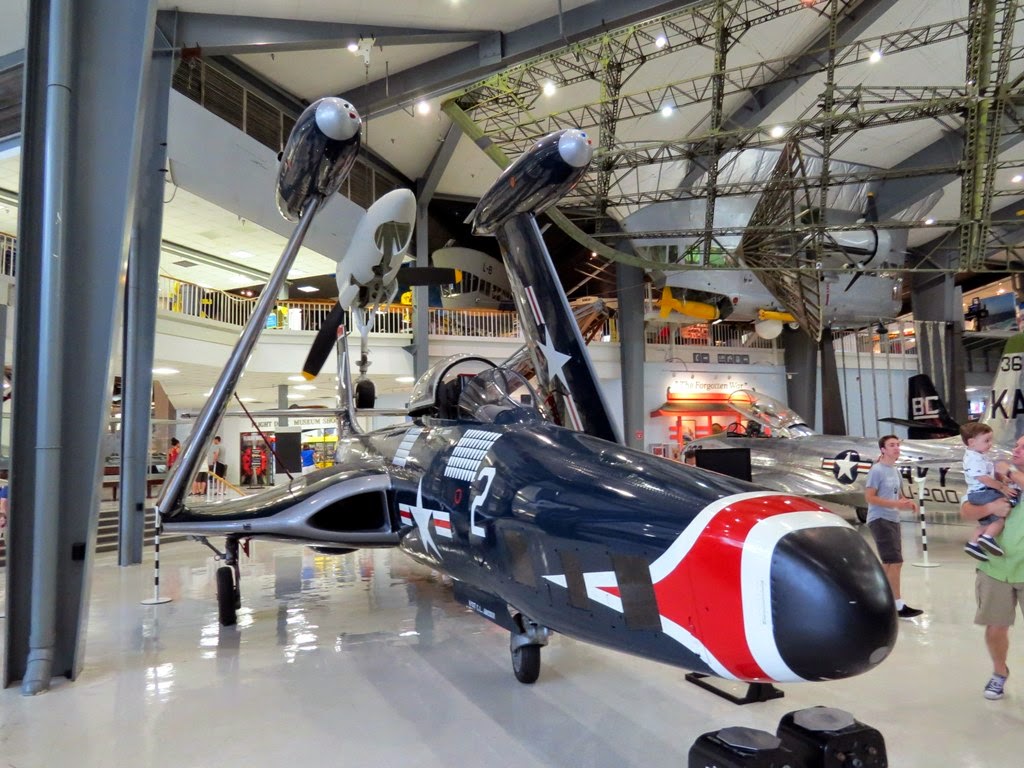 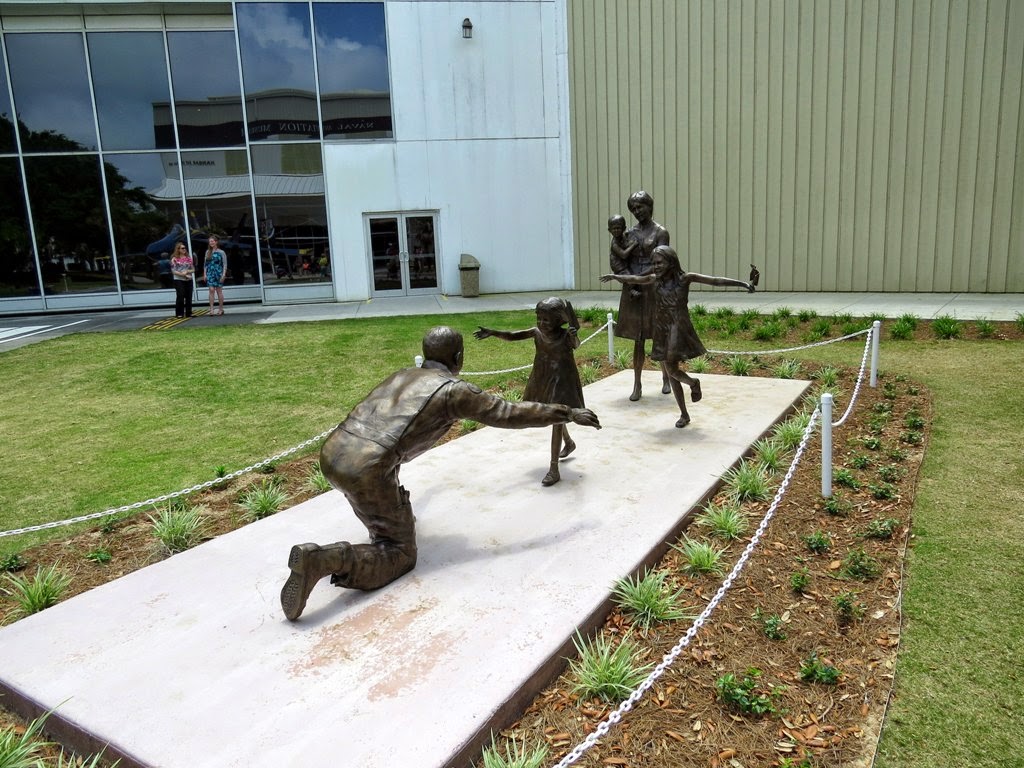 Posted by Chuck and Anneke's RV travels at 6:22 PM

We saw the Blue Angels in Pensacola too. It was an excellent show. We really enjoyed the museum. Glad you got to see part if the show.

So sorry the practice was cut short. They are fun to watch. They seem to have a handle on that flying thing.

Great pictures of the Blue Angels! Hope you get the opportunity to catch a full-length practice some time.

I got to see them when I was there and it was a great show!!!

Although it must have been a disappointment, it's a good thing they only fly in optimal conditions.

We saw the Blue Angels at El Centro, CA. They head that direction in the winter. We loved watching them and wish we could do it again.

Good for them for putting safety first. Sorry for you though.

I stopped at a rest area on I-90 near the Wisconsin/Minnesota border a couple of years back, and the Blue Angels were practicing right over head!

At least you got to see them up close judging by some of your pics.

First, thanks for the tour of the Panama canal.

When I was a little girl, some 45+ years ago we were visiting my grandfather in BC - at some point the Blue Angels made a visit, breaking the sound barrier over the city. And at the same time breaking countless windows, including those at my grandfather's furniture store.

I've always loved airshows, and will watch jets, etc. at any opportunity.

I've seen the Blue Angel, the USAF Thunderbirds and even the Canadian Air Force's Snowbirds perform. But I bet an old, bold pilot such as yourself could show these "kids" a thing or two... :c)

Short or long ... they put on a great show. We only saw them performing from the beach ... next time, we'll try for the bleachers.

Like Wanderin said the Blue Angels winter in El Centro, Ca. My husband and I worked there as civilians for about 6 years. It was neat to take a break from work and stand outside and watch then practice daily. Even got a ride in Fat Albert, my husband is retired USMC so he had a few connections. That was a ride of a lifetime.

I have seen the Blue Angles a couple of times. The first time was at Wilmington, N.C. Have also seen the Thunderbirds. They both put on a great show.