Transiting the Panama Canal has been on my list for a long time.  It is really one of the wonders of the modern world. Depending on how you look at its history, it has taken hundreds of years and thousands of lives to build.  There are many documents and opinions on the canal, so I will not spend any time covering its history.  A good short version of this long story can be read here.

We arrived at the entrance at sunrise and passed dozens of cargo ships waiting their turn to transit the canal Atlantic locks.  Our ship moved to the head of the line for a simple reason.  Cruise ships have priority because of the higher fees they are willing to pay. There are complicated fee structures for the cargo ships, but for cruise ships the fees are based on berths.  Occupied berths pay $115 for each and $92 for each empty berth.  The Coral Princesses transit, this time, was around $235, 000.  The largest fee ever paid was over $400,000 by a cruise ship. Somehow we were talked into being part of the filming of the ship entering the locks from a helicopter. Our assignment was to hold up letters that helped spell out our ships name for the 100 year anniversary of the canal. This took a lot longer than we expected, but we did make it into the ships video of the cruise. 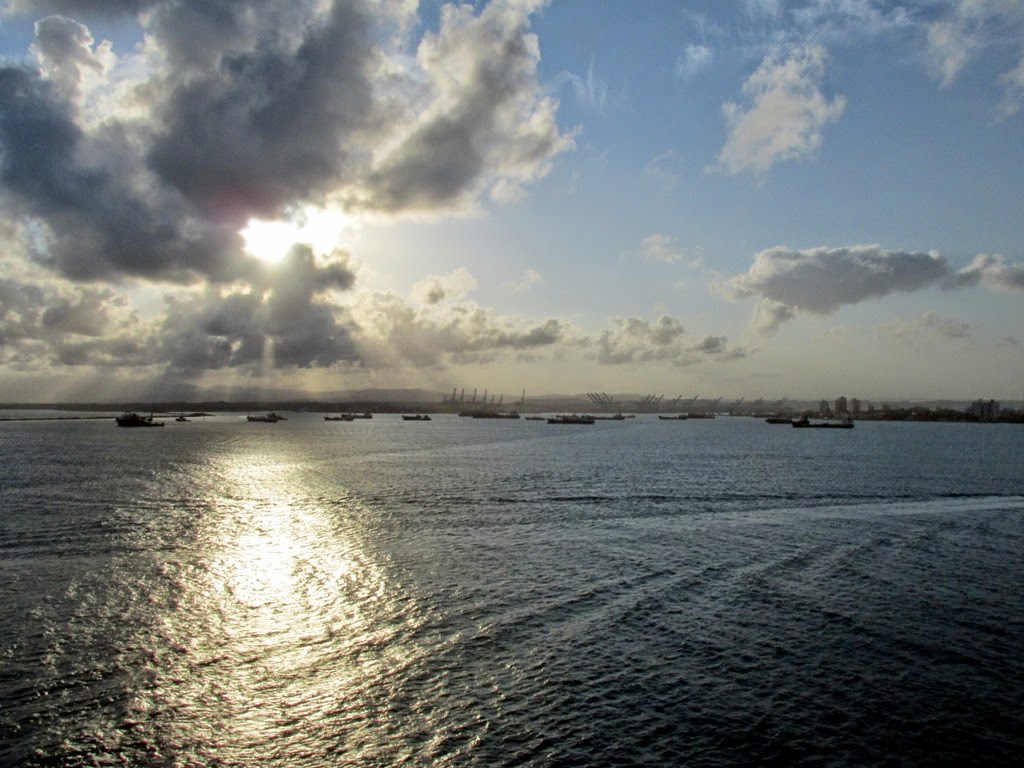 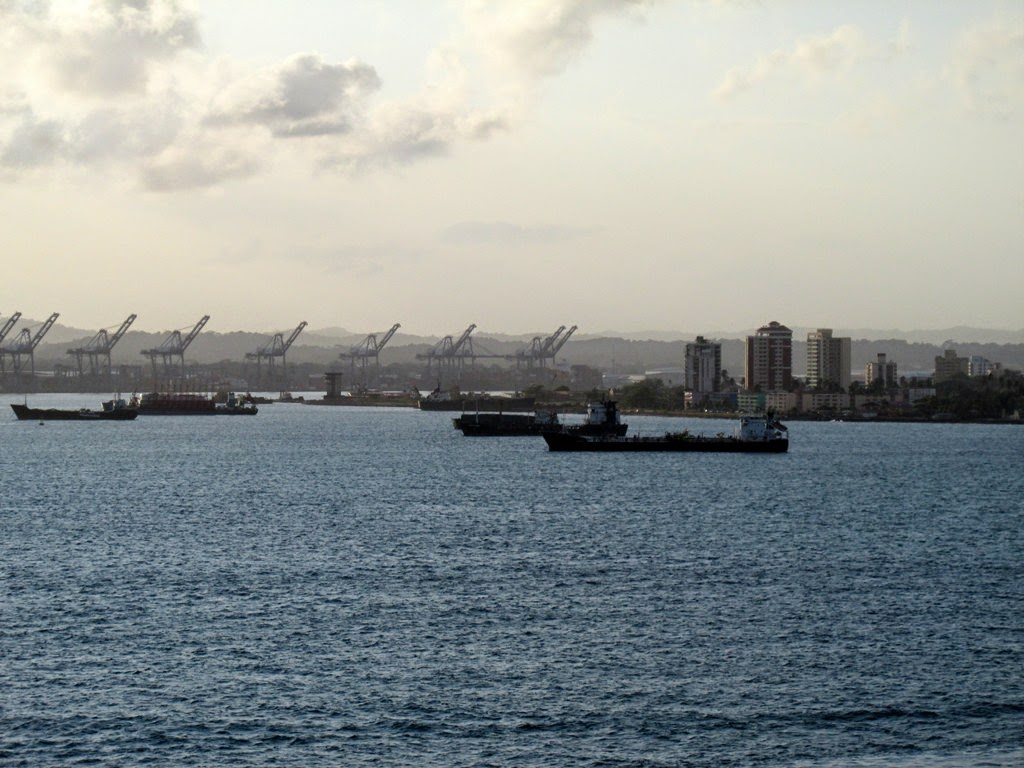 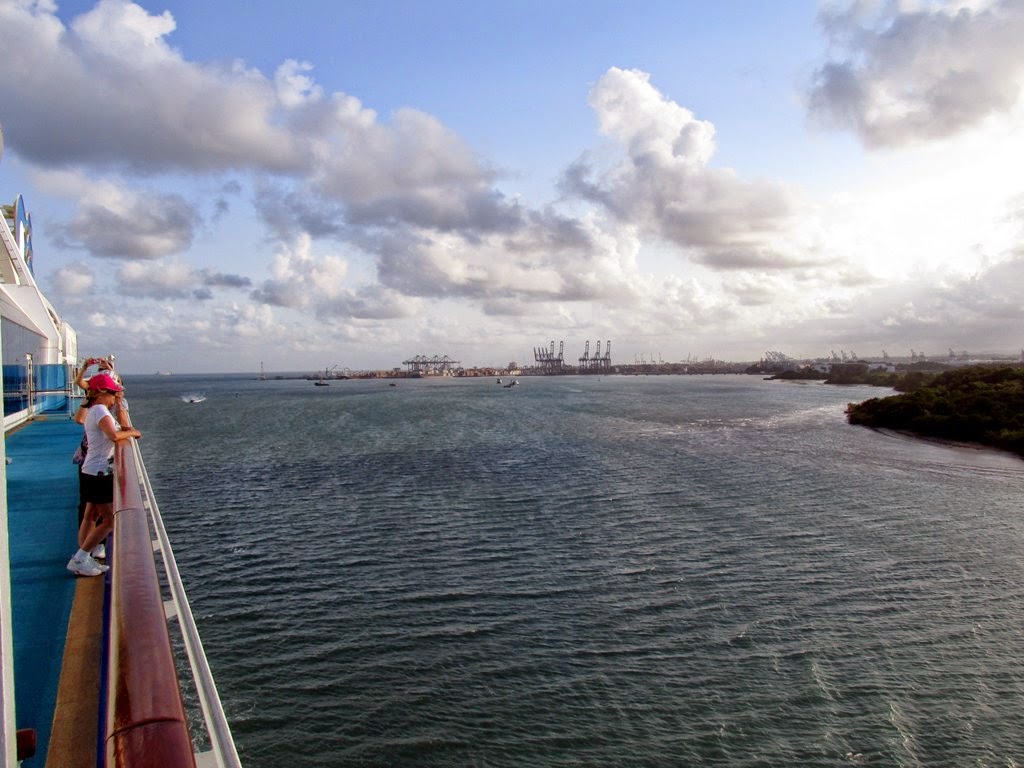 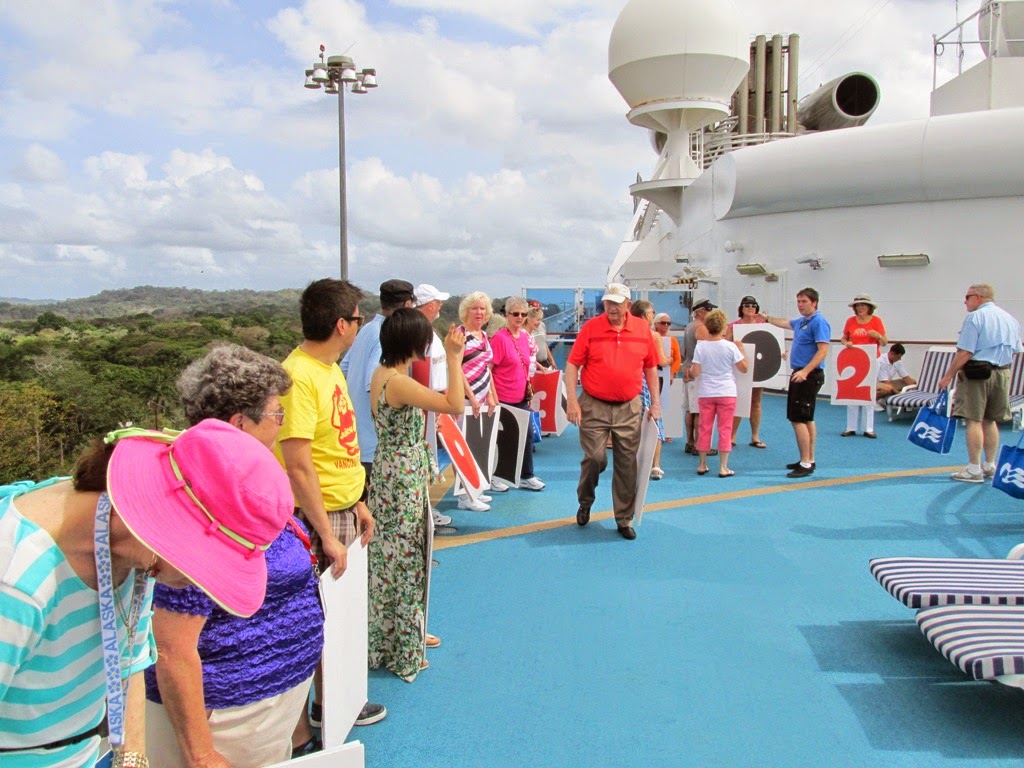 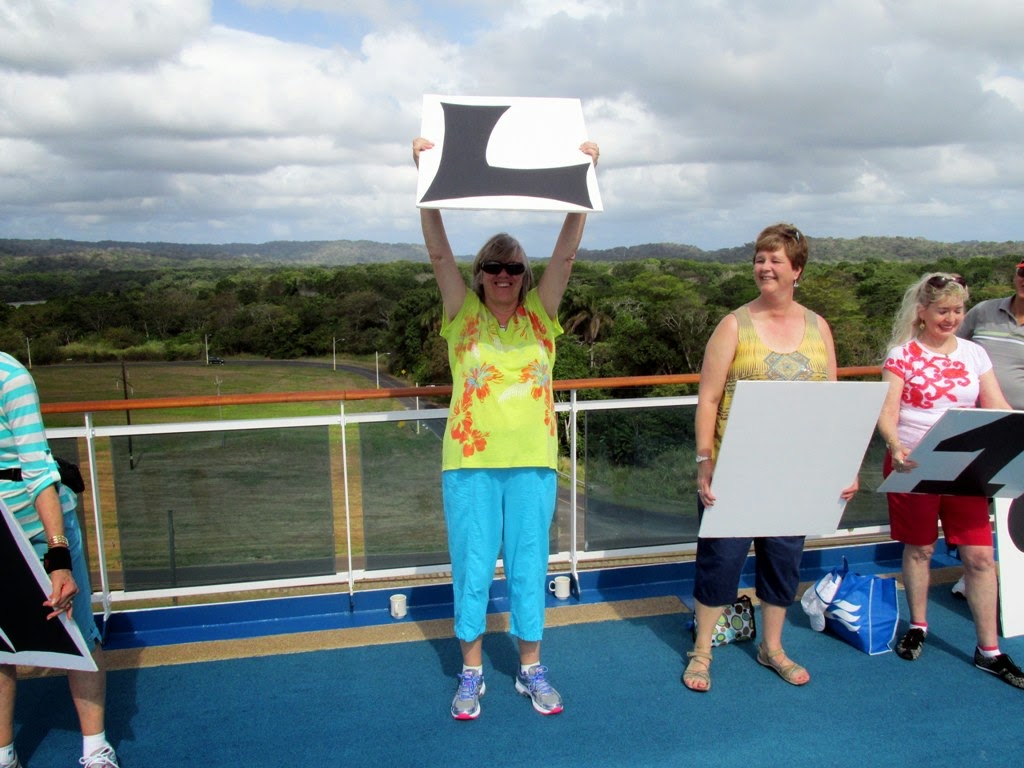 Even though we have been through many locks in numerous countries over the years, it was still a fantastic experience.  In particular, I found the coordinated operation of the guide tractors impressive.  As you can see in the pictures and videos, there is very little clearance for those ships that are built to be "Panamax", which means they are the largest ships possible to transit the locks. 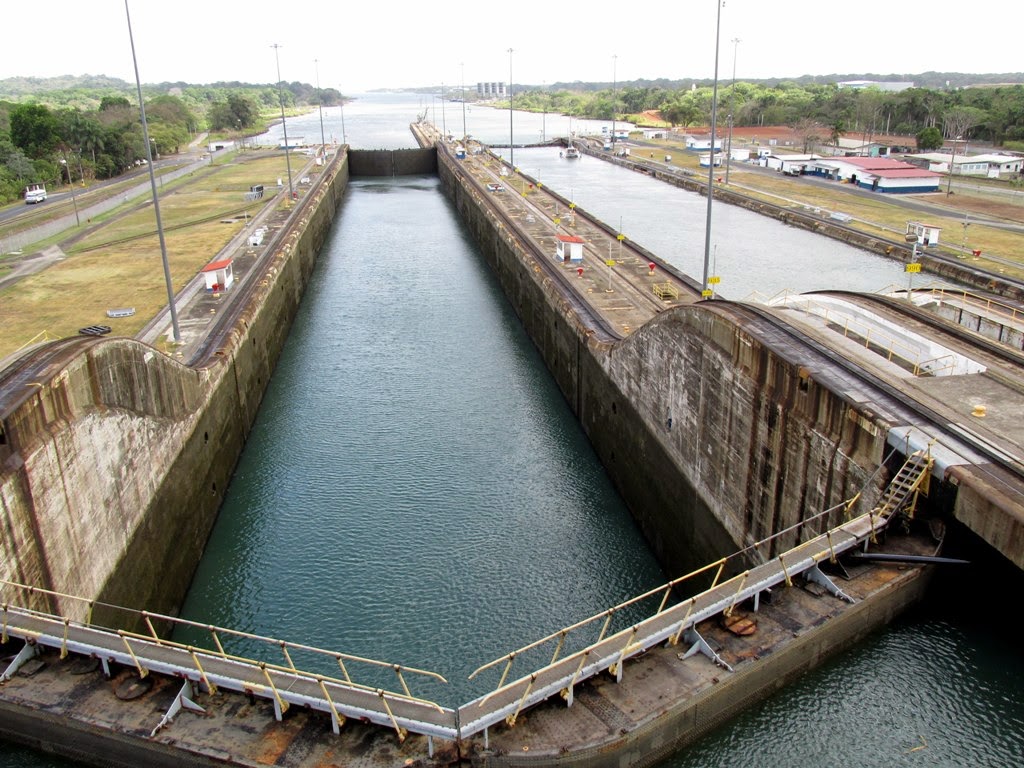 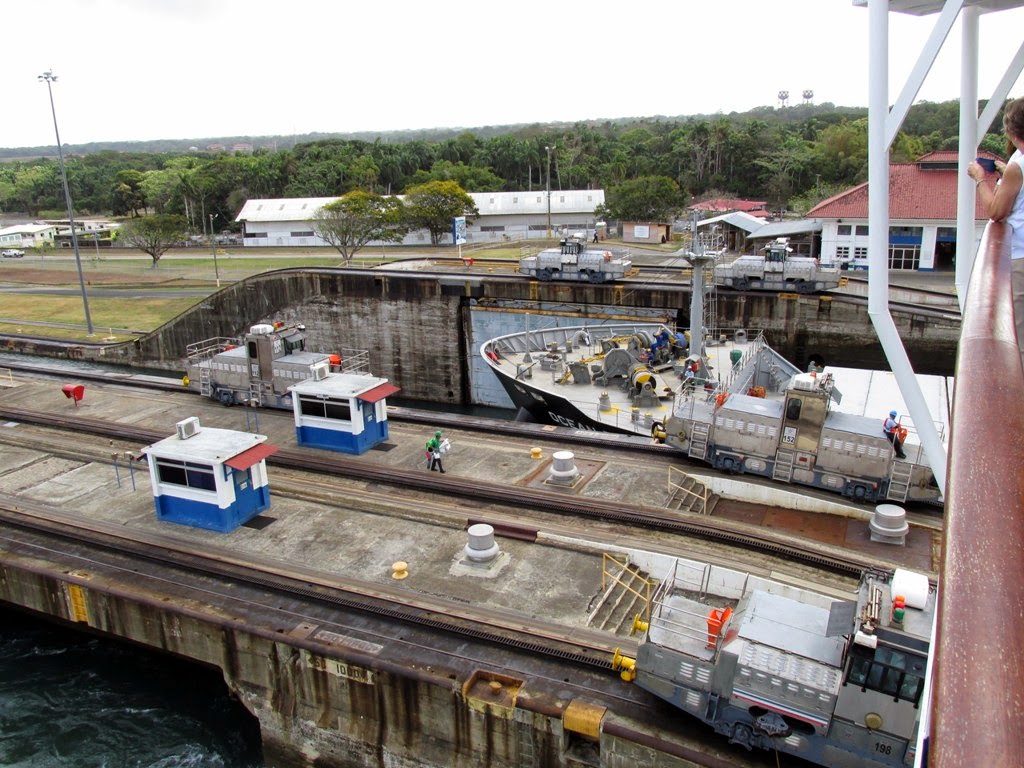 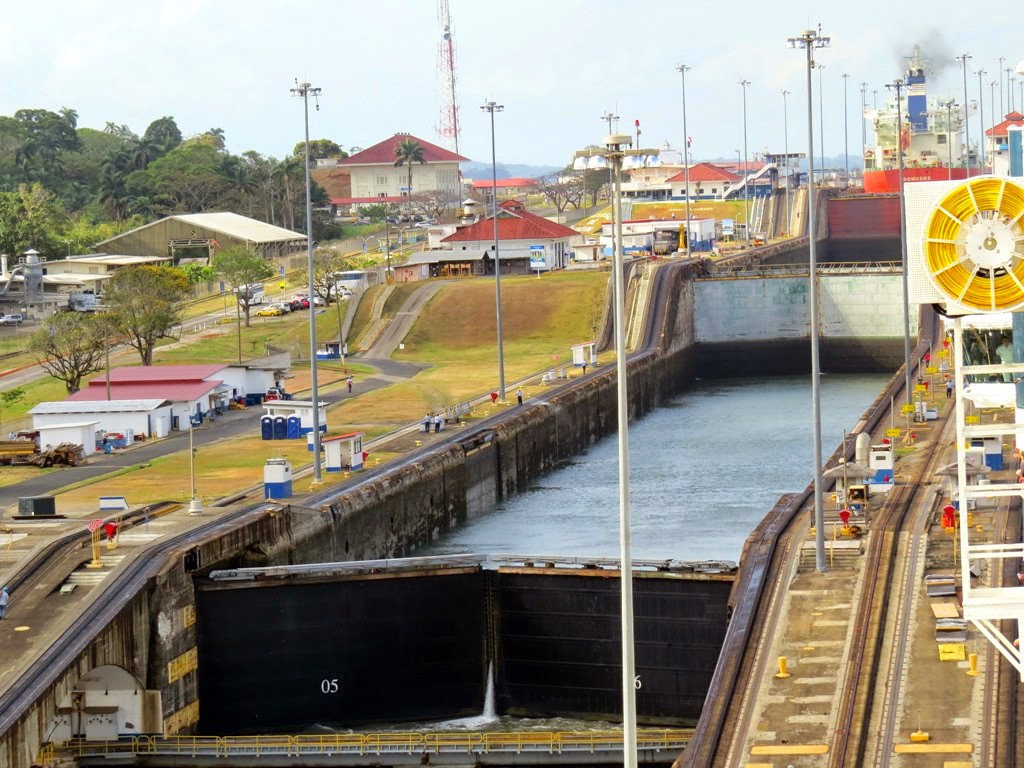 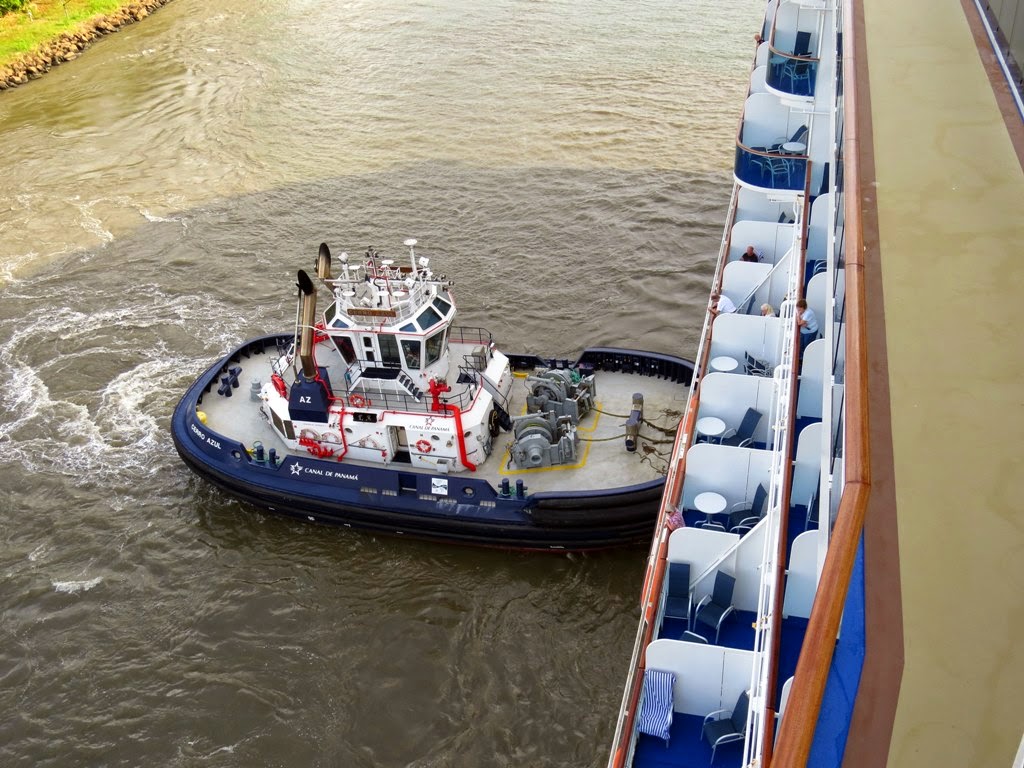 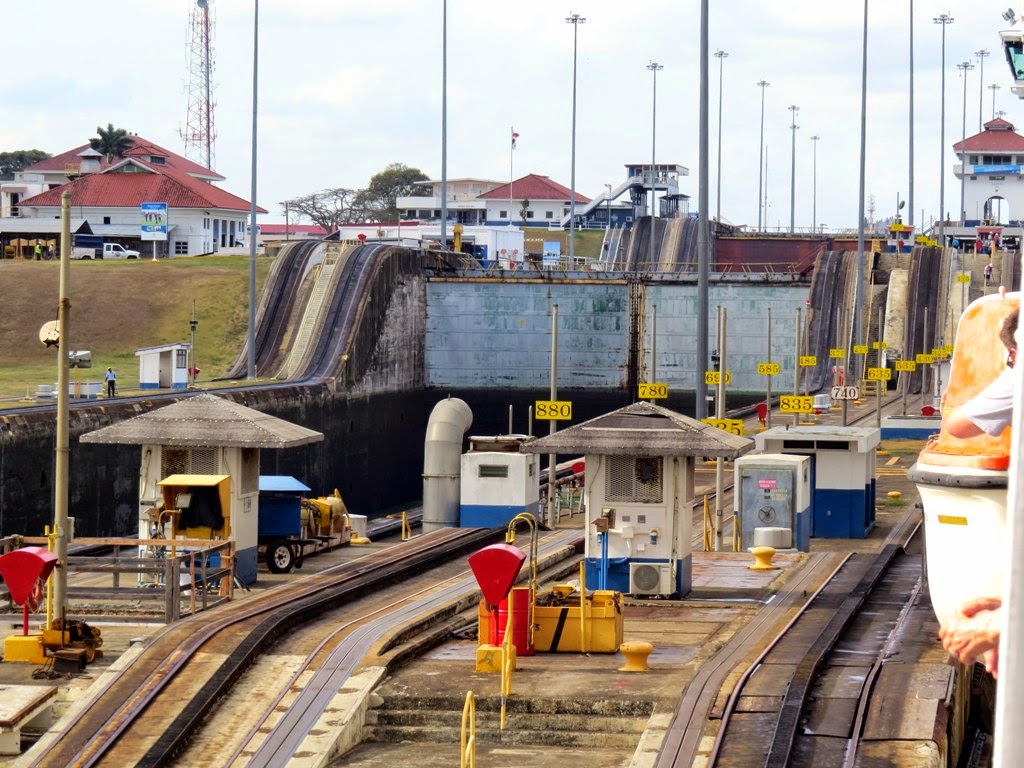 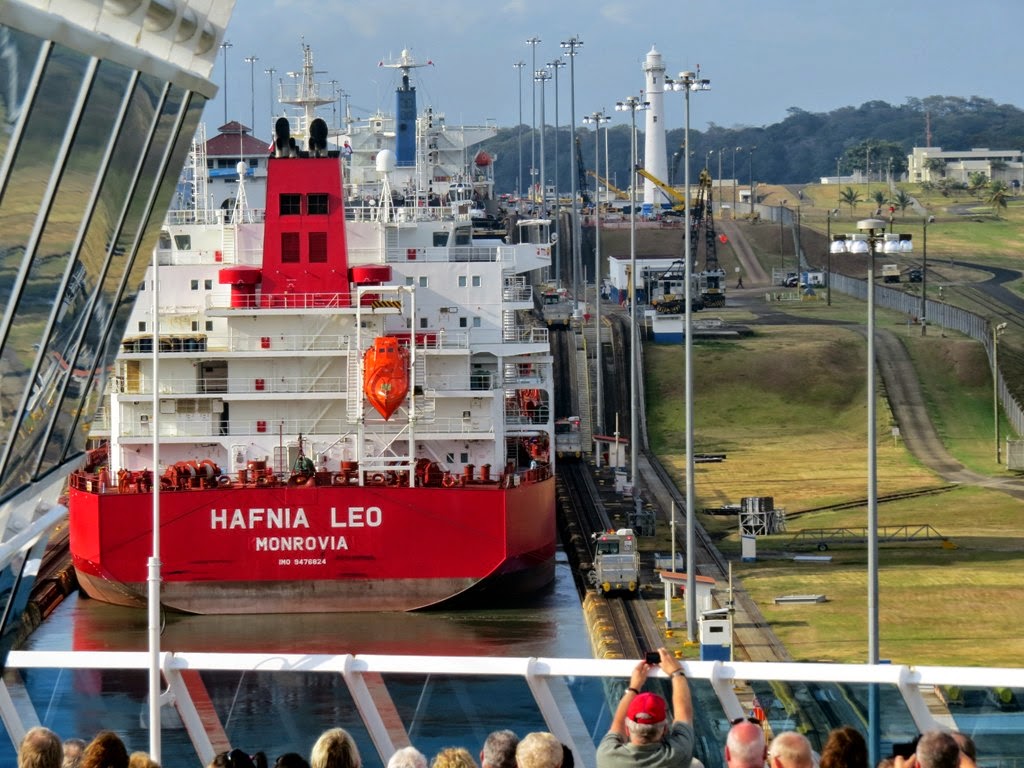 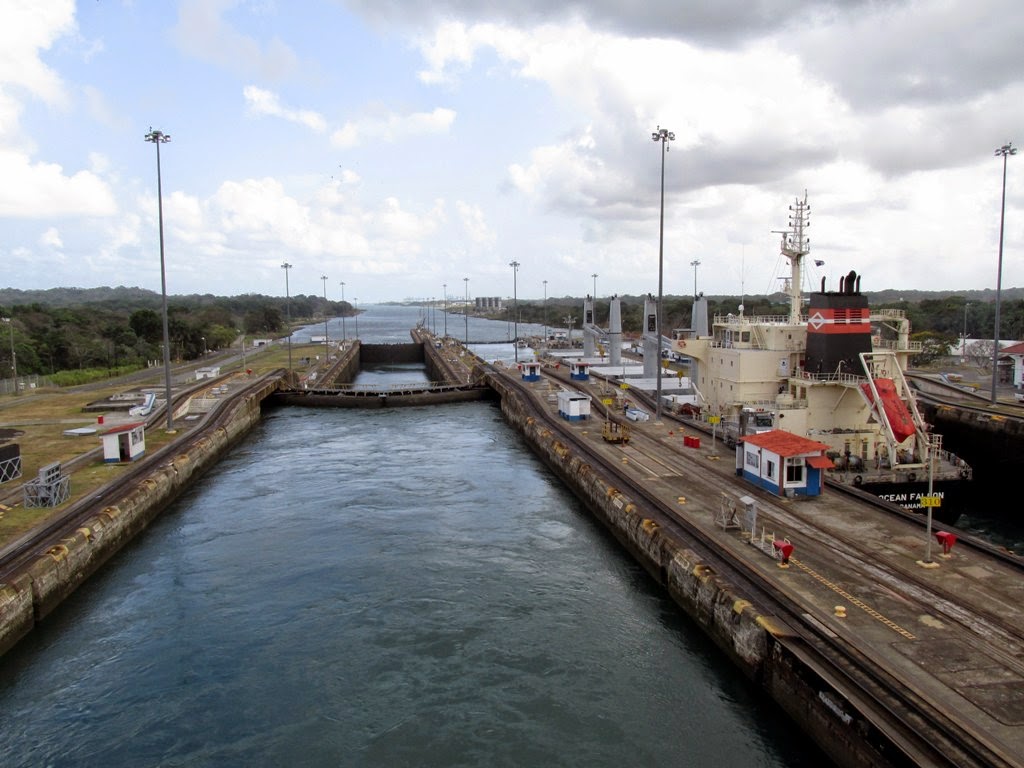 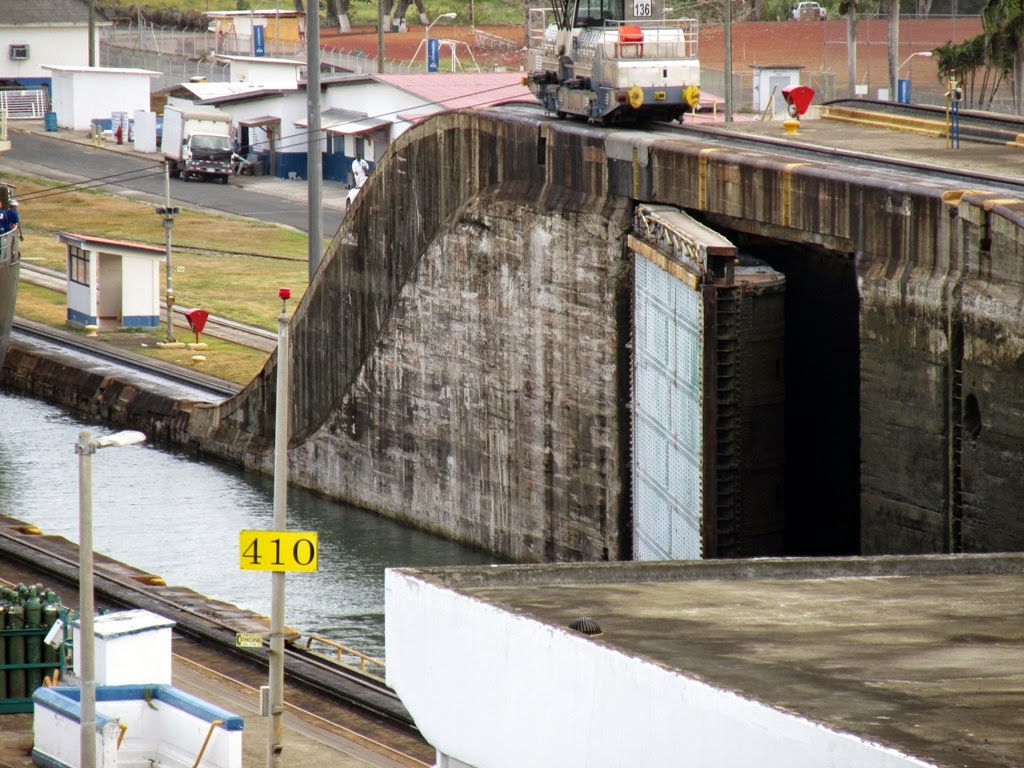 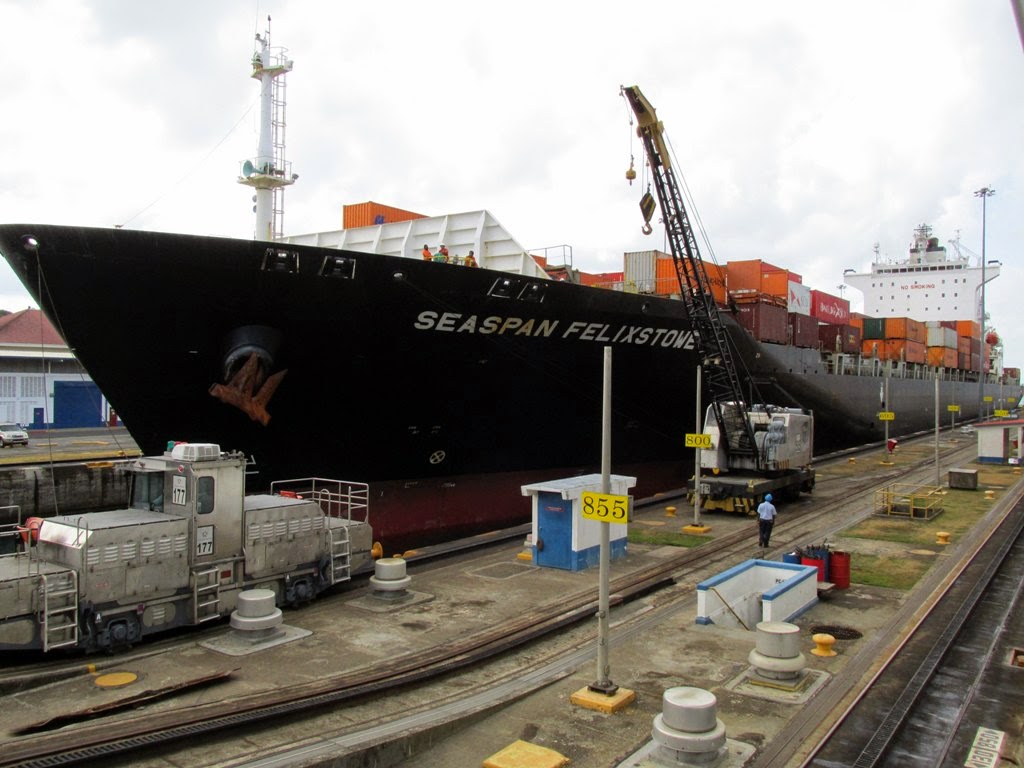 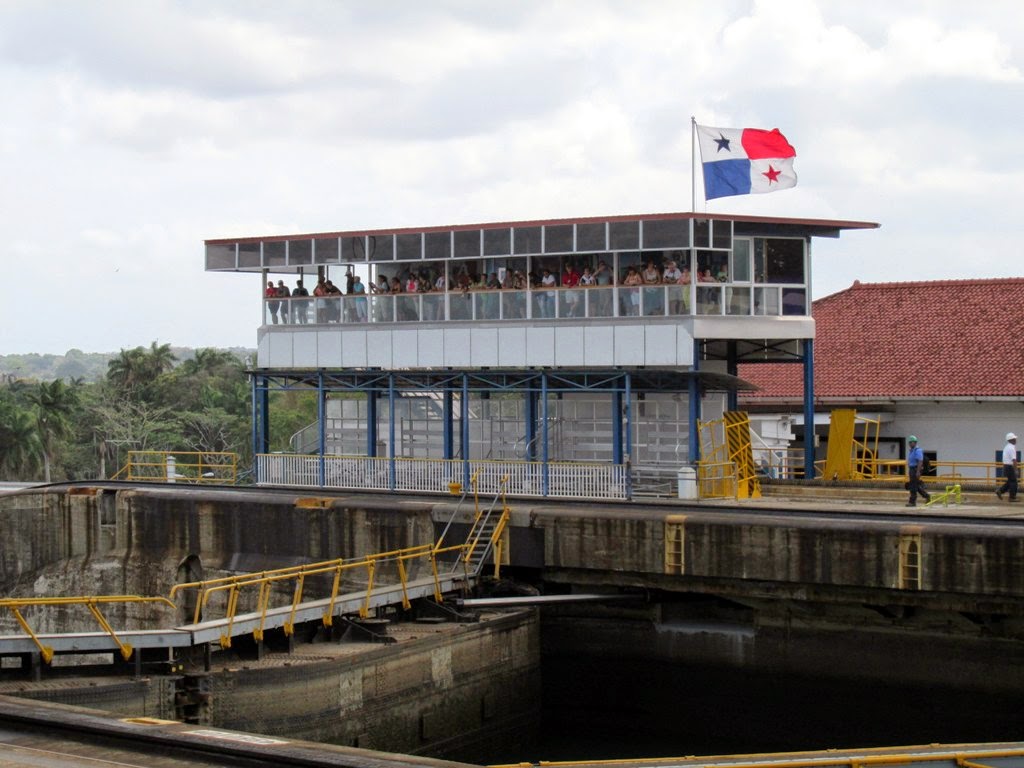 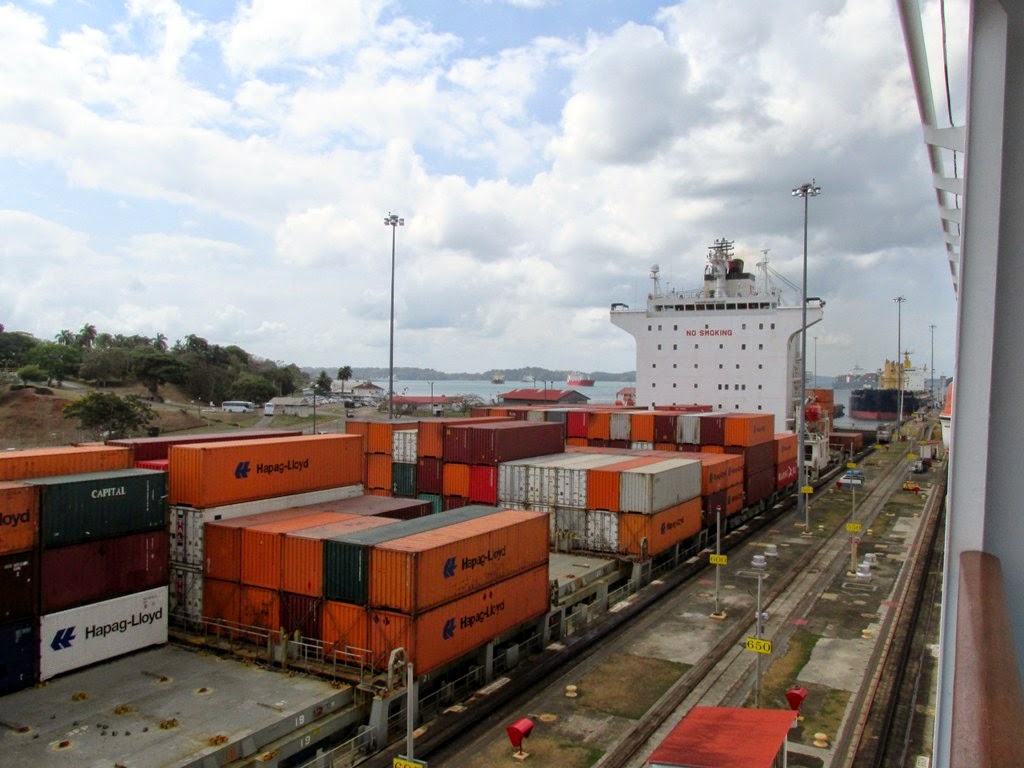 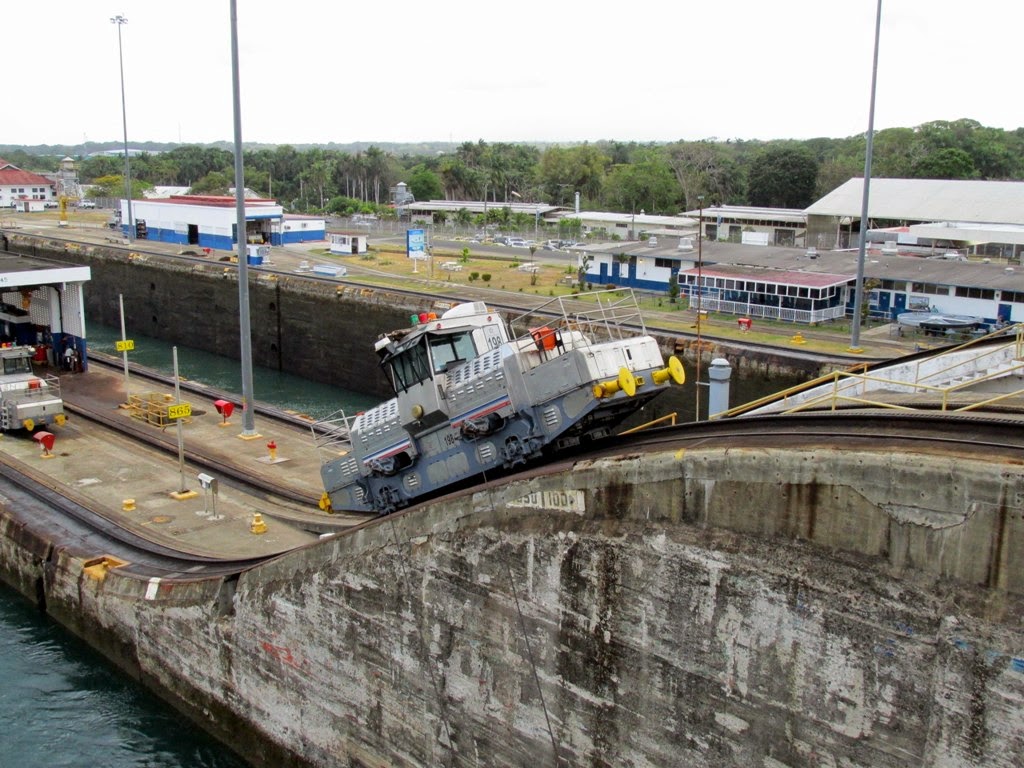 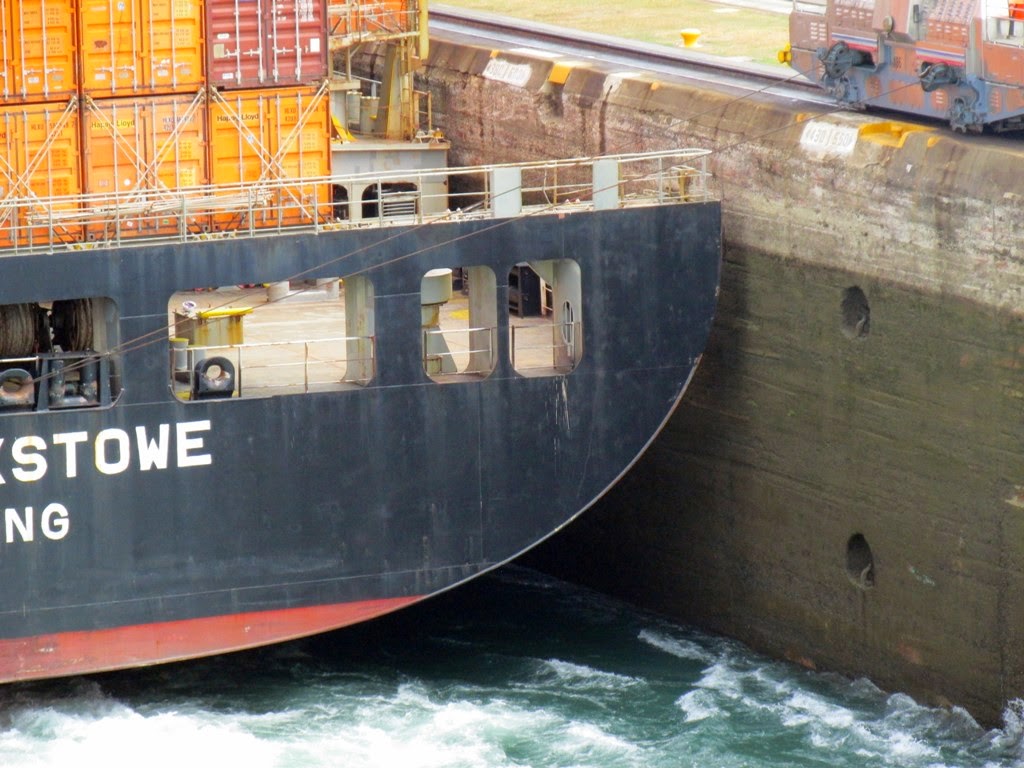 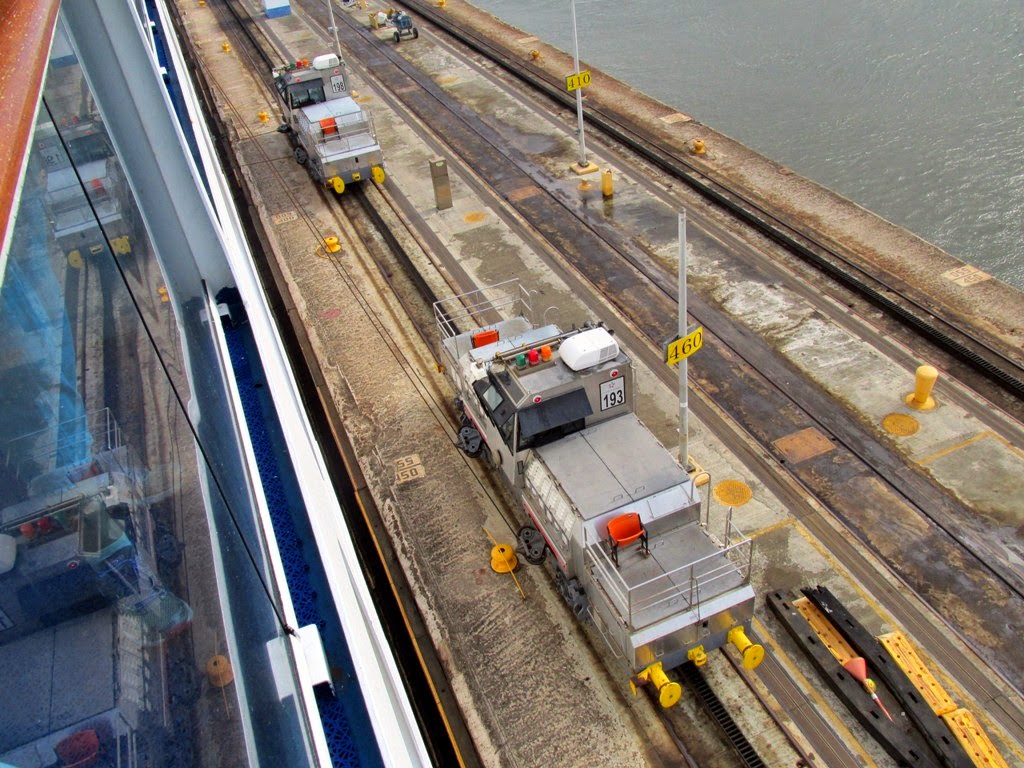 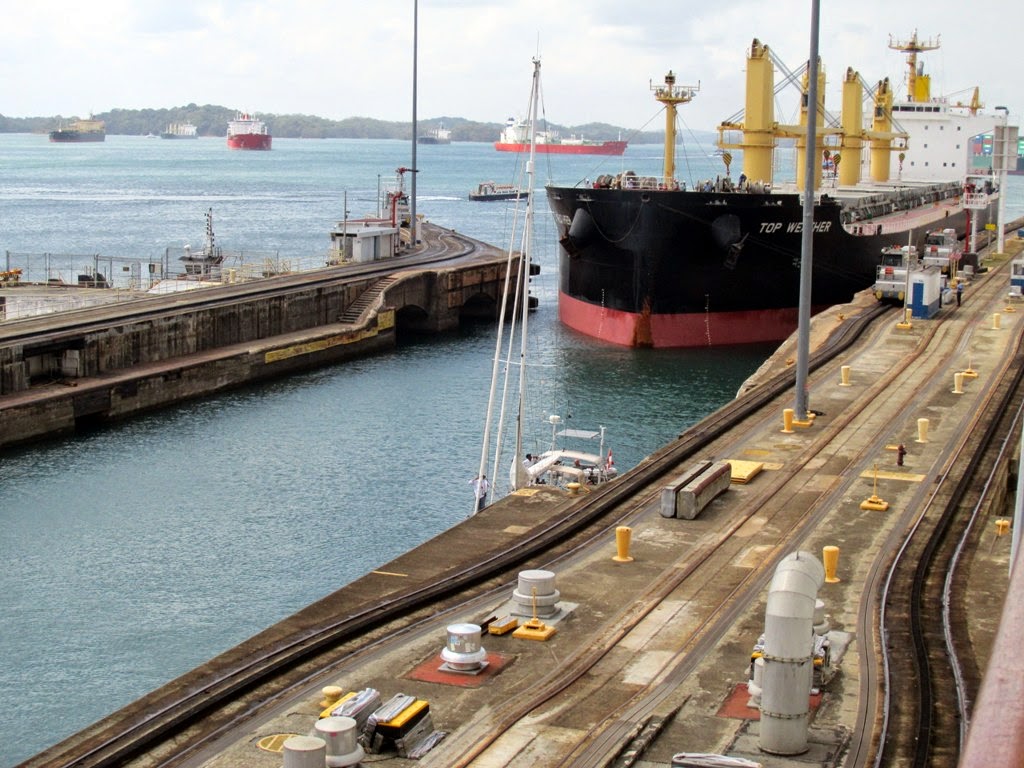 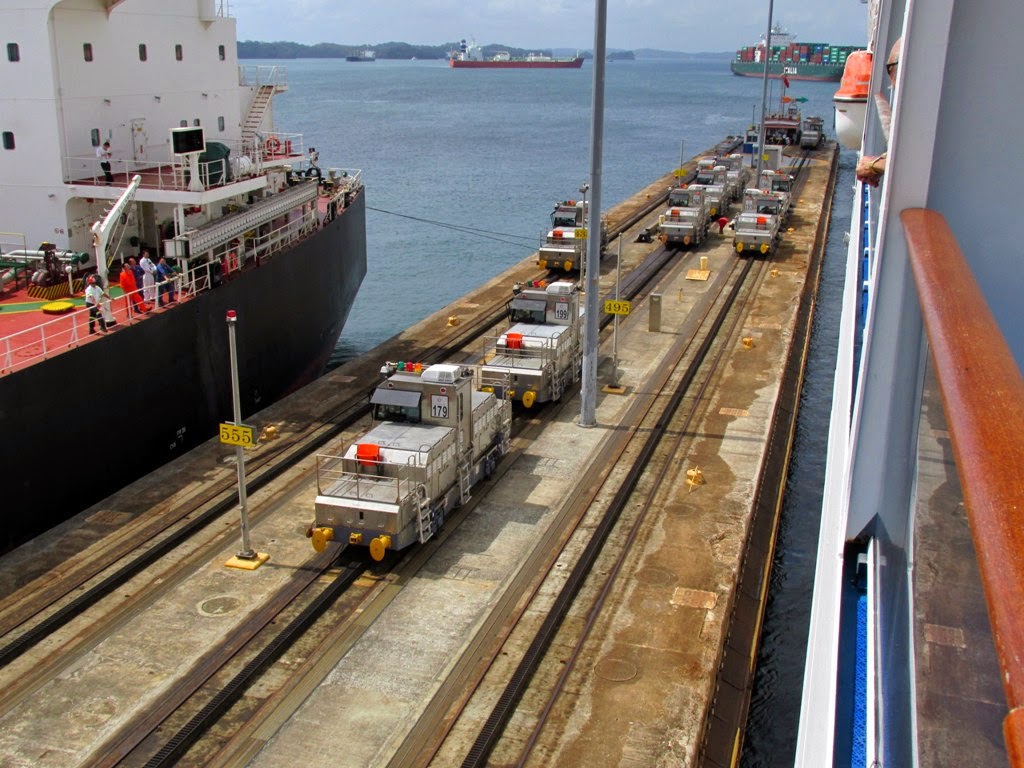 One exciting change that is coming in 2015, is the opening of a new set of locks that will allow even larger ships to transit the canal.  As we entered the lock area, we passed by a set of the new lock doors waiting ashore for the canal construction to be completed at the end of next year.  Despite all the modern technology, I noted that they still use small row boats to actually go out and checks ship draft marks on some of the vessels. 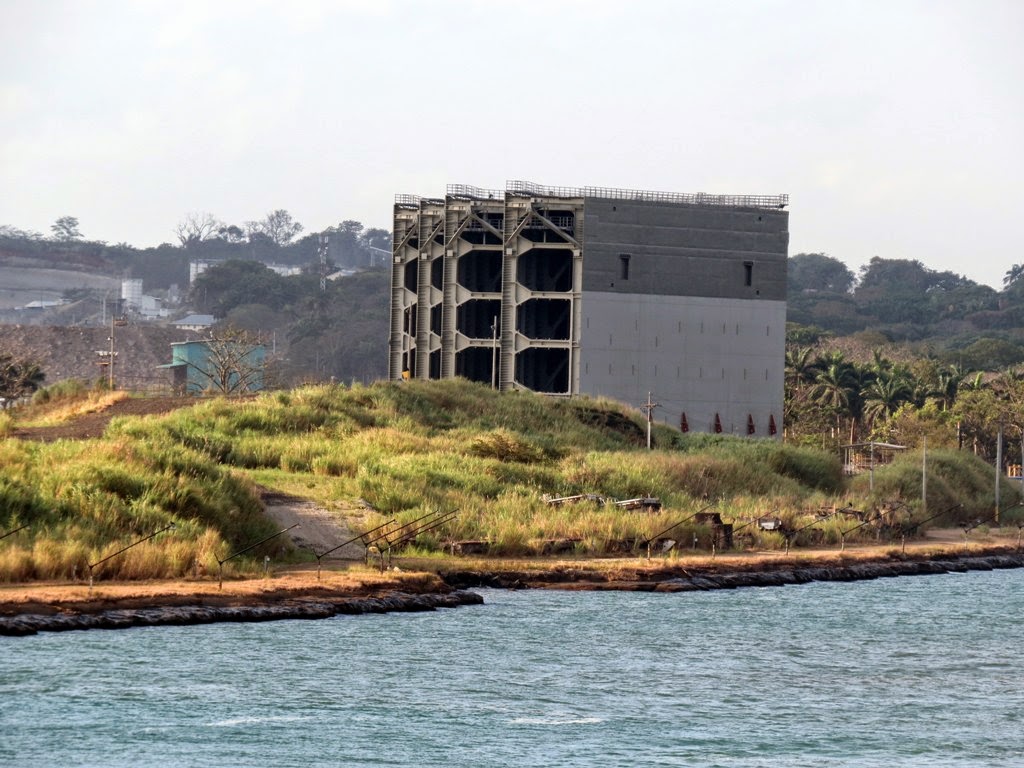 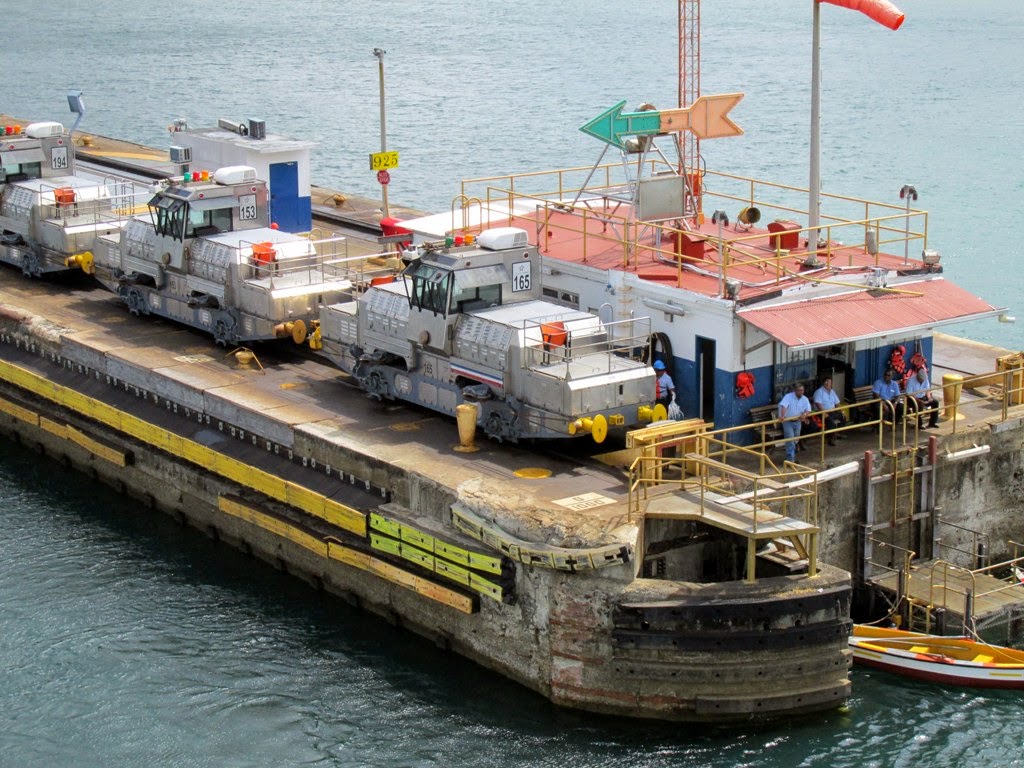 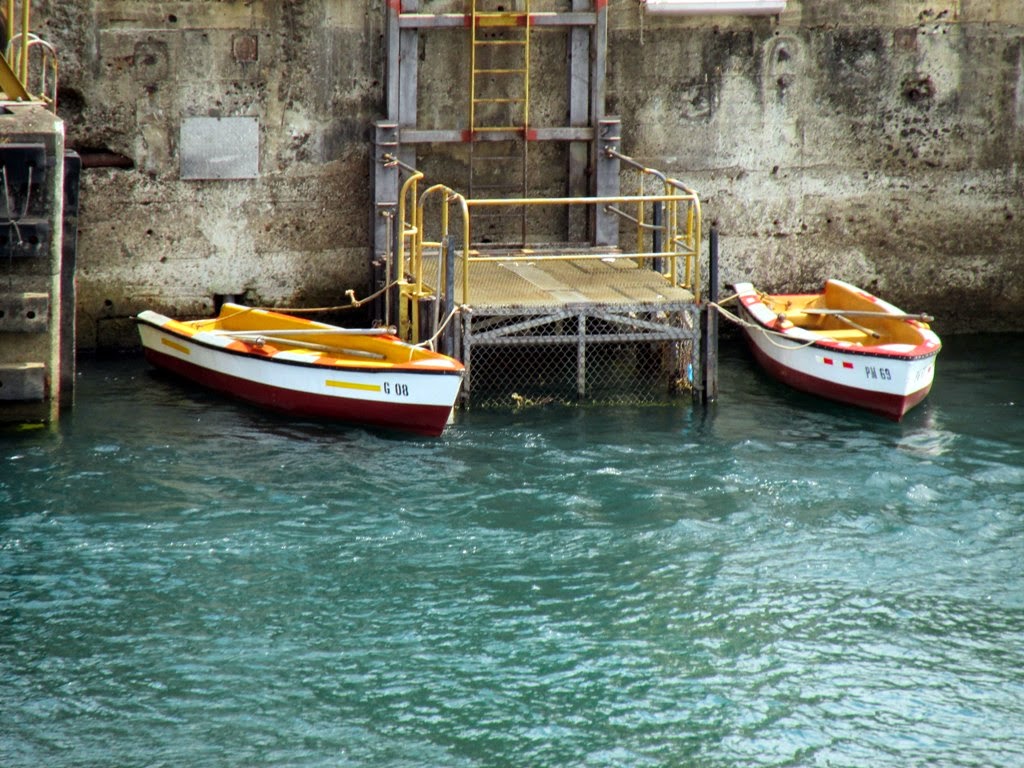 To complete our Panama Canal experience we next took a smaller tour boat through the complete canal system including the Pacific locks, which will be the subject of the next post.
Posted by Chuck and Anneke's RV travels at 6:41 PM

I got a kick out of the bleacher seats so tourists can sit and watch all the vessels transiting the locks.

I was amazed visiting the Mira Flores lock control station that they still use the same mechanical controls that were installed in 1913 when the canal opened. They were talking of finally replacing the system with a computer controlled one.

It's an amazing feat of engineering. We've been through coast-to-coast once, made a partial transit once, and will be making the full transit again in December ... this time from the Atlantic to the Pacific. Despite past experiences going through canals, we never tire of it. I imagine you've read David McCullough's "Path Between the Seas" ... if not, I highly recommend it. Now I'm off to watch the videos.

Wow--on my list as well but I don't think I will get the cowboy on a cruise ship!

We stayed at the Gamboa Rainforest Resort in Panama and visited the locks from there. It was amazing to see the ships transit those locks. It certainly beats going all the way around too.

My parents went through the canal and back. They loved it. Interesting that even here, money talks. If you pay more you get to go first. Too funny!

What an amazing journey! It would be so interesting to see and I really enjoyed seeing your pics. I may have to put that on my bucket list too!
Candy

The Panama Canal is a marvel. What a wonderful treat to take a tour of it. Thanks for all the super photos.

Who is that cute little girl holding up the L...hehe

A lovely series of photos. It makes me want to jump on the cruise ship!

On our list - we see everything in the USA.