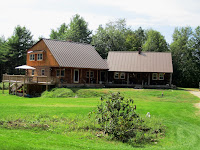 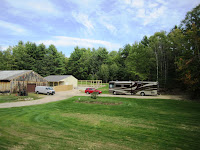 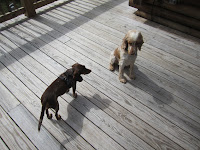 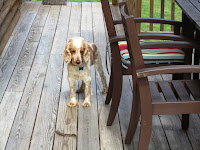 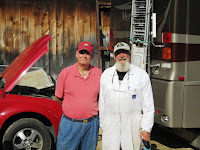 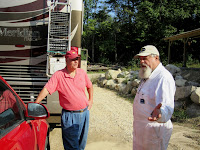 Visiting friends is always on our list of things to do. So as we plotted our trip back to the west and south a stop in southern New Hampshire was in the works to visit my buddy-Steve. We have known each other for over 30 years. We both served in the Coast Guard most of that time in the same mission program so our paths crossed a number of times over the years.

Like many friendships among transitory folks, we see each other after long periods in between. Most of the time, this seems to make no difference to us and we pick up right where we left off. As usual there is a lot of shop talk. Since we are both long retired, that would be old shop talk. We also have some common ground in the work we did after the Coast Guard.

Steve adopted a puppy who was going to be put down when he was born with water on the brain and was considered unsuitable. Steve rescued him and they are now constant companion. He calls Burt his special needs dog. Halley and Burt seemed to get along right away without any struggles.

Steve has an interesting avocation. He collects and restores antique motorcycles and cars. He has a number of very special units which he showed on the first day of our visit. Unfortunately, I was so busy talking, I never thought to get any pictures.

Since he has a large property, we were able to camp right there. It was a great visit and I look forward to our next get together.
Posted by Chuck and Anneke's RV travels at 5:57 PM

Looks like you had a nice visit and a great place to stay.

Visiting with old friends is always special. I visited with my best buddy from high school after 37 years, a great reunion and by no means our last.

How wonderful that he adopted an unadoptable dog. Next time,you really must take pictures. I bet he's got some really neat cycles and cars. It is fun to catch up with old friends again.

good to see Steve grew the beard back; too bad he no longer has a classic motorcycle in the living room! hopefully we will see him soon & once again camp on his property. - corrie & dan

It's great to reconnect with old friends, esecially ones that speak Coast Guard. :c)

I am glad he rescued the dog. My son's girlfriend kept a kitty with CP from a litter. They call her Stumbles and that's what she does but she is so sweet. Takes a special person for a special needs pet

What a great place to stay.

That is one lucky dog - and, one lucky owner too probably.

How wonderful to be able to visit with old friends. It looks like you had a wonderful time. How nice your friend opened his heart to an "unadoptable" puppy!
Candy

So sorry that Steve passed away after your visit. I know you must be happy that you got the chance to see him last weekend. Hope his puppy gets a good home.