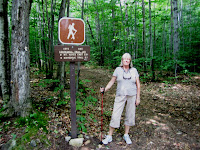 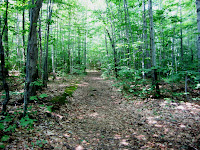 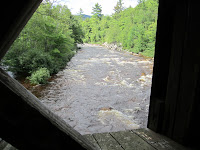 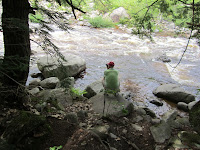 The last few days have had spotty weather, but in between the rain periods we have done some hiking and touring of the area. It appears to us that the main outdoor activity in the area during the summer is hiking. The Appalachian Trail passes through here and has a lot of traffic. We wanted to walk at least a small portion of the trail and found a section just across the river from our campground. As we were returning to the car from our brief hike, we encountered a young man heading up the trail. He has been on the trail for 5 months, starting at the south end in Georgia and now had only a few hundred miles to go to reach the north end. He travels around 20 miles a day and spends most of his nights camped on the trail. I appreciate his determination, but at the same time, there is no way I would care to do that. When we stopped at the Appalachian Mountain Club visitor center, we were told that traffic on the trail was three times normal this year. From their conversation with those checking in at the center, it seems that much of this is due to the economy. Those who could not find work after college, or were laid off, were taking this time to fulfill a dream to hike the trail.

We also have hiked some of the long trail out of our campground and trails leading to several of the numerous falls and cascades in the area.

Finally, this afternoon, we took a driving tour through some of the most popular areas during the winter ski season, including Conway, North Conway and Betterton Woods. Along the way we spotted the many lodging and other tourist attractions that go along with the ski season. Most of the lodges are one of a kind and not part of major national chains. This is clearly a party area in season. It almost makes me wish I knew how to ski.

We found a few more covered bridges in good condition that were originally constructed in the 1890’s. Along the way, there were more falls, a gorge and beautiful scenic overlooks.

It was a nice way to end this visit to northern New Hampshire.

Posted by Chuck and Anneke's RV travels at 7:31 PM

That really is a beautiful area!

Really gorgeous. But even when I was young I wouldn't have hiked the entire Trail and camped out every night. Definitely not my thing.

looks like a great place for a hike!..love the new header shot!!

Beautiful today!! And a fabulous cascading water shot! My son, the professional, has attempted to teach me how to do that several times, but not enough yet!

Such a beautiful area! It looks so cool and inviting. I'd love to visit there!
Candy

Beautiful area. I agree about the trail. I could never do the whole thing, now or when I was younger. I do think it would be fun to do a piece though, just for the sake of saying I did it :)

Love those covered bridge photos. Sure looked like a beautiful hiking area.

All familiar place names, but it's been so long since we've been up that way that I'm sure I would find them much changed. Last time we were up in NH The Old Man of the Mountain was still showing its profile.

Those extended trail hikes are overrated. Give me my RV any day.

Love those pictures of the covered bridges and that hiking sign model. ;c)

Gorgeous pictures :) Love the covered bridges but didn't see any ourselves.

We passed through all of Maine, New Hampshire and Vermont much too quickly on this trip. I would love to do a more focused trip there in the fall when all the leaves are changing. I miss the season change in BC as we get a lot of evergreens!

Thanks for stopping by my blog!

We camped in that area NH a few years back. Not long after the Old Man in the Mountain lost his face!

I see on the previous post you took to Cog Railway up Mt. Washington. We drove up.

At that time (2006) we had a brand new F250. While in NH it developed problems and had to be towed in for the first of many breakdowns over the next few years.

We had a rental car we used for the drive up the mountain. Oh how glad we were using it to drive to the top. No way would I want to be on that road with a truck the size of what we had.

So much to do in that area. Enjoy!

What a beautiful picture at the top of the blog. In fact, ALL the pictures are beautiful!
I read the blog on the Cog Railroad also. WOW...what a climb! You did a great job!
Thanks for leaving a comment on our blog. I wanted to email you back but found no email address on your blog. Let us know if you need any info about Ohio. We may be able to help.
Enjoy the ride.

We really loved this area and would love to go back sometime in the future and spend more time exploring and hiking in the White Mountains. Your pictures are beautiful, glad you had such a wonderful time there.