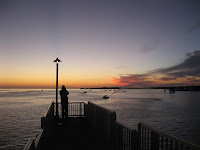 While wandering around Cedar Key, we saw numerous signs and flyers advertising the annual Christmas boat parade. As we have mentioned, we remain boaters at heart and have watched many boat parades over the years, with our favorite being the holiday parade in Annapolis, MD. So it was a no brainer to decide to attend this parade.

We arrived early to watch some of the preparations for the parade and enjoy the sunset on the waterfront. The sunset did remind us a bit of Key West on Mallory Square, less the crowds and entertainment. It was still a great sunset. Walking around downtown, it was clear that everyone was on the pier area waiting for the parade.

It was a bit cold waiting for the parade to start, but finally it got underway. There were only about eight boats to brave the cold, but they did put on a nice parade. The crowd was not much bigger than the number participating in the parade, but this was made up for by the enthusiasm of those in attendance.

We were again reminded of how different things can be in the many places we visit. This was a small town event, much like the places I grew up. Those who come from a big city and see this as a poor attempt, miss the special feeling that comes from being a part of the community. In talking with the locals, everyone knows all about their neighbors and their history. The manager of our campground is the 6th generation of his family living on the Keys. This is a part of America that sadly seems to be disappearing fast. It is best to enjoy it wherever you find it.

We were very glad to be able to be here for this celebration.
Posted by Chuck and Anneke's RV travels at 7:18 PM

Very nice pictures! It's nice to see these small communities and town's carrying on with their traditions. It's not the Macy's Parade, but it means just as much to the locals and visitors always find these events interesting too.

what a great day!..was there Christmas music and carrollers to go along with the boat parade!..nice shots of the sunsets too!..thanks for letting us ride along..

Although I grew up in Chicago, I am happy that I raised my kids in a small town in upstate New York. You just can't beat those small town celebrations! :)

It looks like you've landed in a beautiful place! Small town celebrations like that are the best. Enjoy!!!

Love those pictures. Once again, wish we were there :)

Great pictures, loved the one of Santa with the red overalls. They sure do things a little different at Cedar Key!