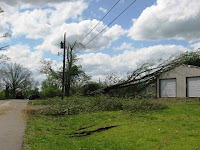 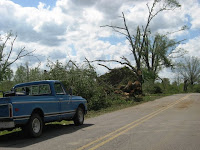 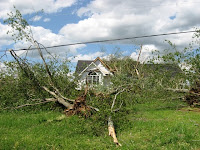 We left Resaca and headed back to the hills of Al and our motorhome. We had watched all the weather reports as they came in and observed the radar images showing the heavy storms rolling over the motorhome and the NWS tornado warning for the area. I admit we were glad to not be riding out the storm with the motorhome. We took the view better the coach than us.

We knew from the weather reports that it could not be near as bad as the terrible loss in Mississippi, but we were a bit anxious. When we got to within about ten miles of the campground, we found the main highway closed and police vehicles everywhere.

After following the GPS around some back roads we ended up at another police barricade, only after driving thru some areas of heavy damage to homes, roads, and power lines. They took the time to help us find a way back to the RV Park. We later learned that at least 23 folks were injured when at least two tornadoes came thru the towns of Geraldine and Albertville.

As we came closer to the park, the sight of damage disappeared and it seems the park and the immediate surrounding area was spared as damage. We were lucky not to be in the area as there were no official shelters within many miles of the RV Park.

We definitely dodged a bullet this time.

http://blog.al.com/breaking/2010/04/long_path_of_destruction_left.html
Posted by Chuck and Anneke's RV travels at 7:51 PM

WOW! How scary that would have been in your motorhome. Glad to hear you "missed" it.