We returned from a 24 day trip over a week ago.  Much of that time was spent without any internet service. At first this was a bit frustrating, but as time went on, I began to enjoy the time not spent in front of the computer screen.  Now after being back  in the connected mode for over a week, I thought it was time to actually do something with the computer besides playing hearts.

The trip was planned  to visit friends and family we have not seen for awhile with a little sightseeing thrown in.  Our first stop was in Decatur, AL to visit Anneke's Aunt Hennie.  We spent a few days catching up with her and Anneke's cousin Maaike. 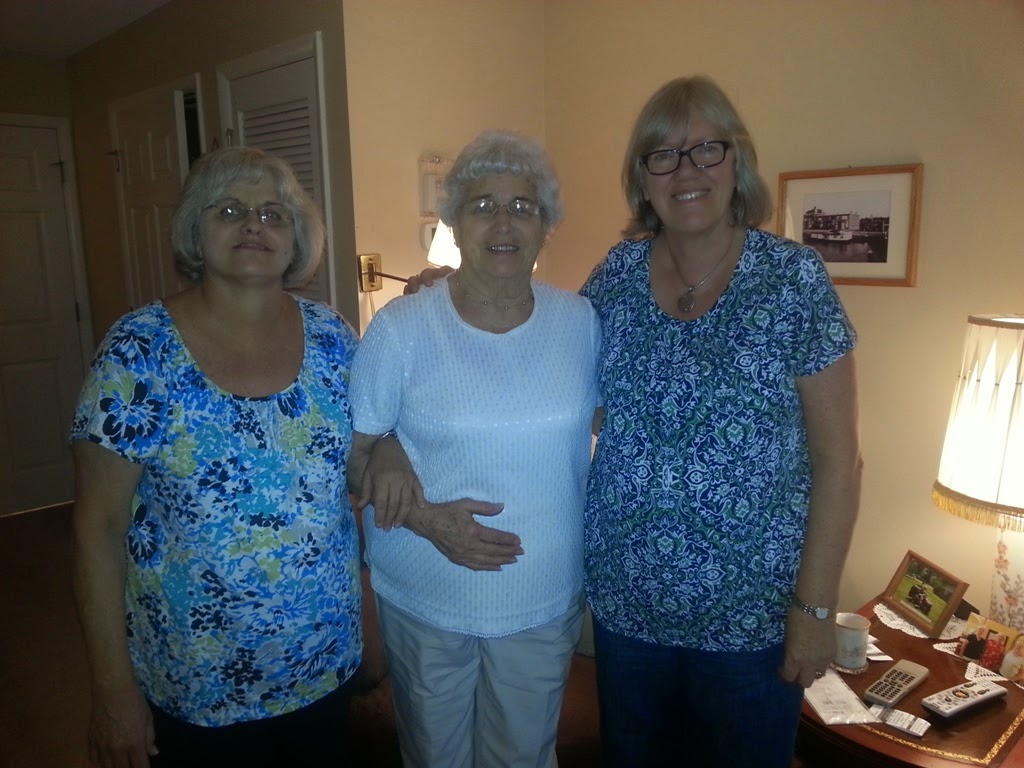 The next stop was Jasper, IN to visit friends Jim And Helen.  Here we were able to mooch dock, which is something we rarely get to do.  This was a great driveway spot with full hookups.  Jim and Helen are also RVers and have these hookups for guests and their own motorhome as they get ready for a trip.  We wanted to see them before they headed out for a long to trip to Alaska with a Winnebago caravan. 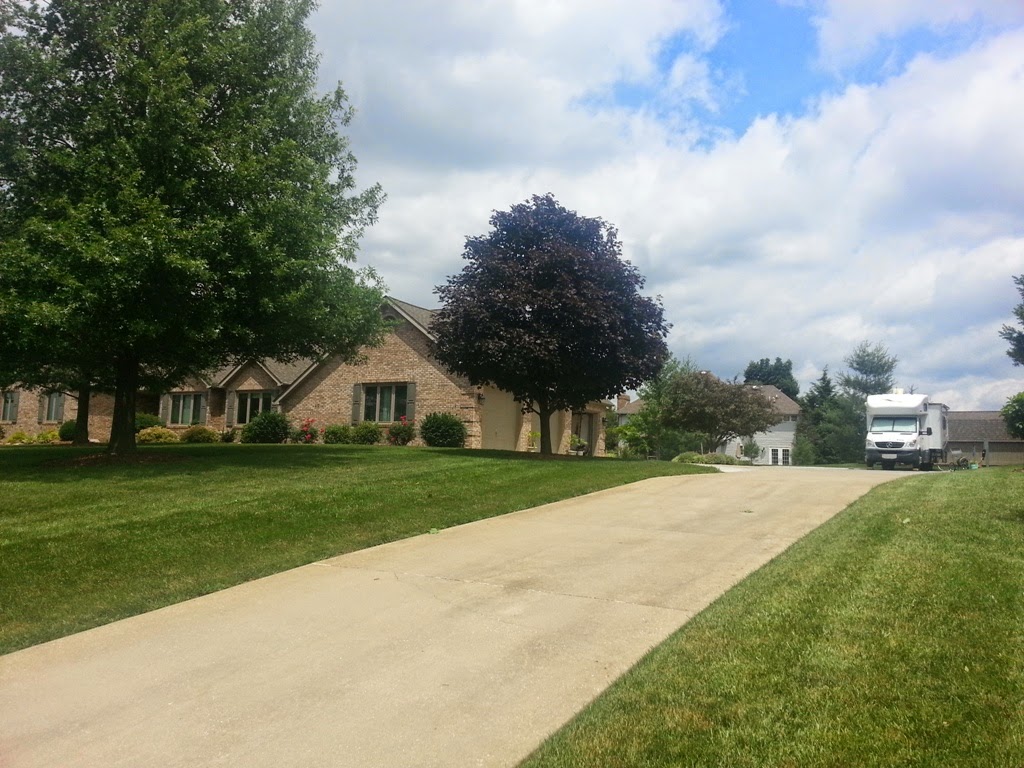 It was a great visit. We first revisited the  West Baden Springs Hotel in French Lick, IN.  This hotel has a fascinating history starting in 1855. It is a wonderful place to spend some quiet time sitting on the veranda. You will notice the railing of the veranda is decorated with swastika symbols. I am sure this has raised some eyebrows, so there is a placard place on the rail explaining the history of the symbol. It has been in use for over 3000 years as a symbol of life, sun power, and good luck. If so inclined, you can also spend some time at the tables at the nearby casino. 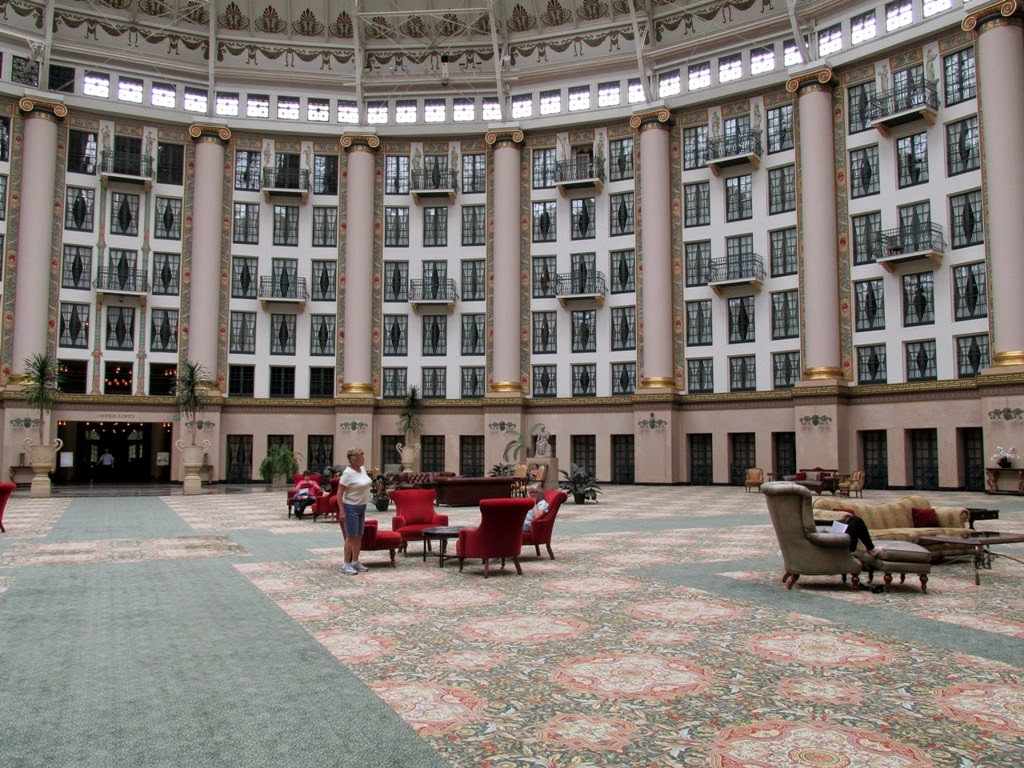 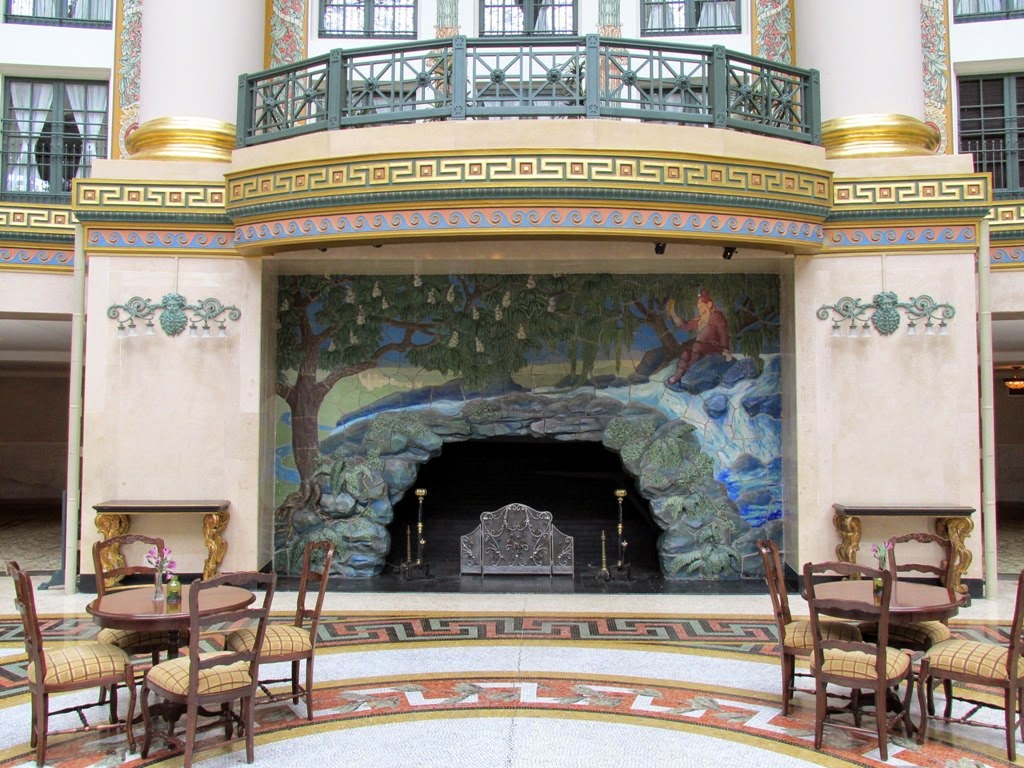 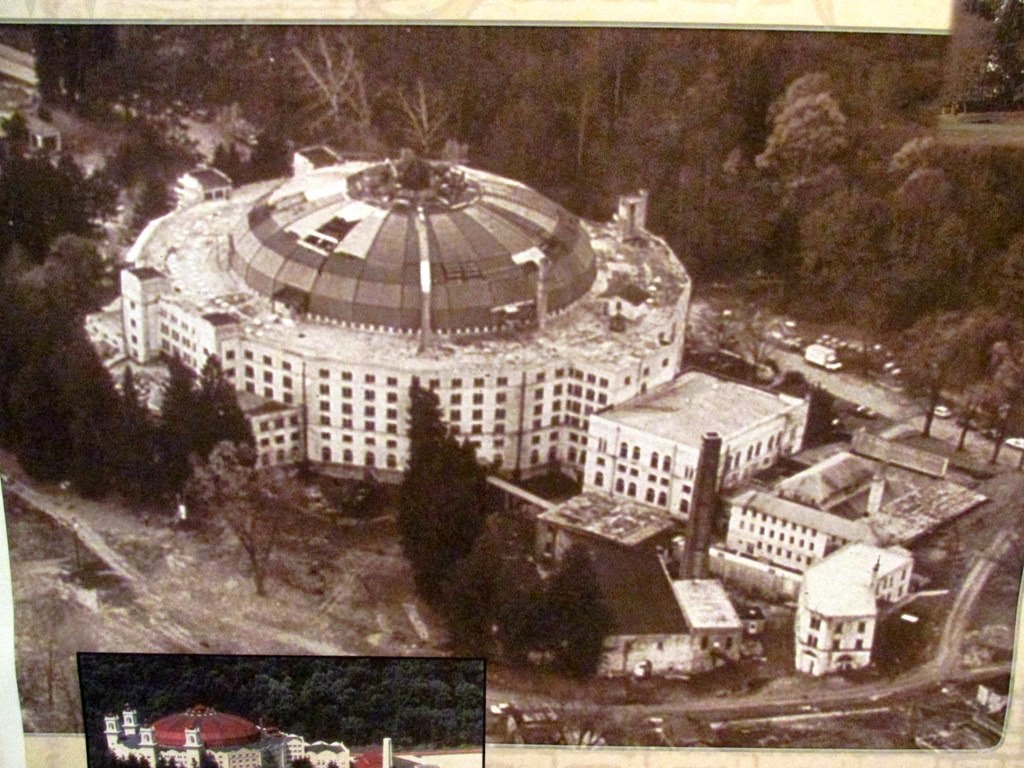 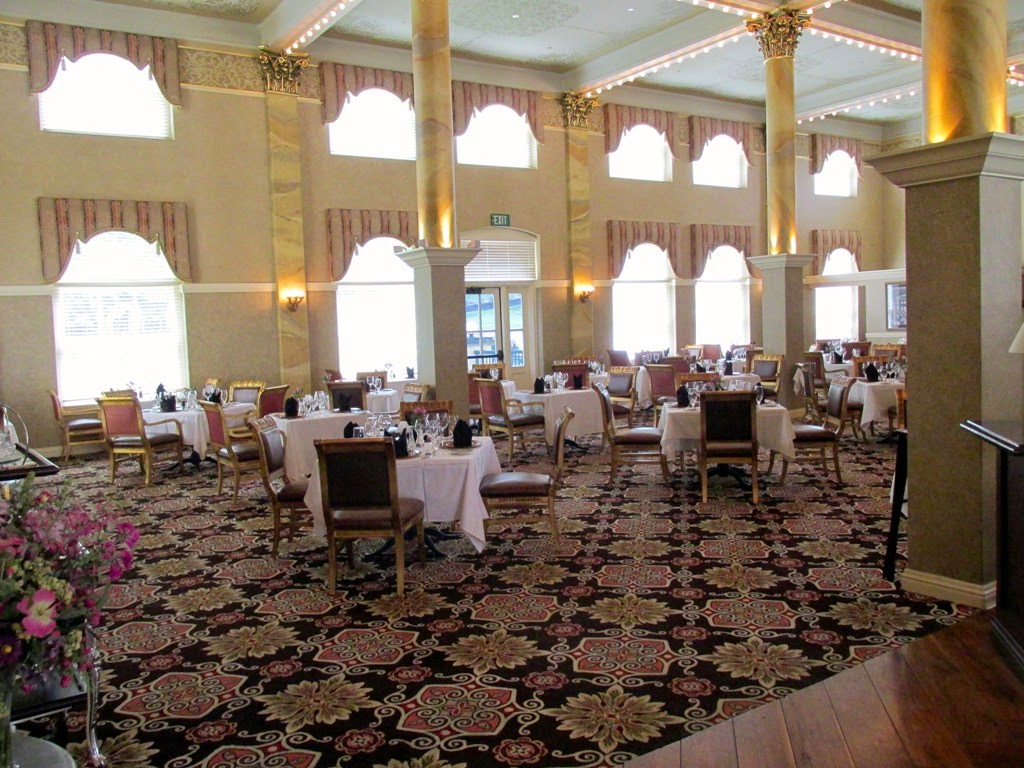 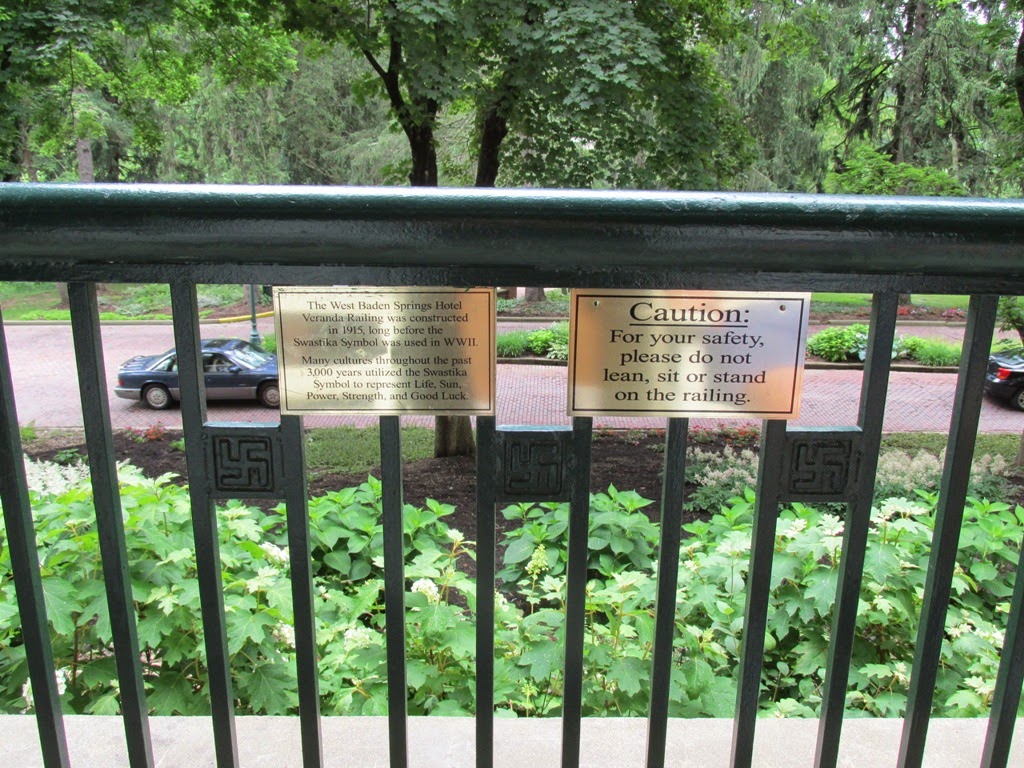 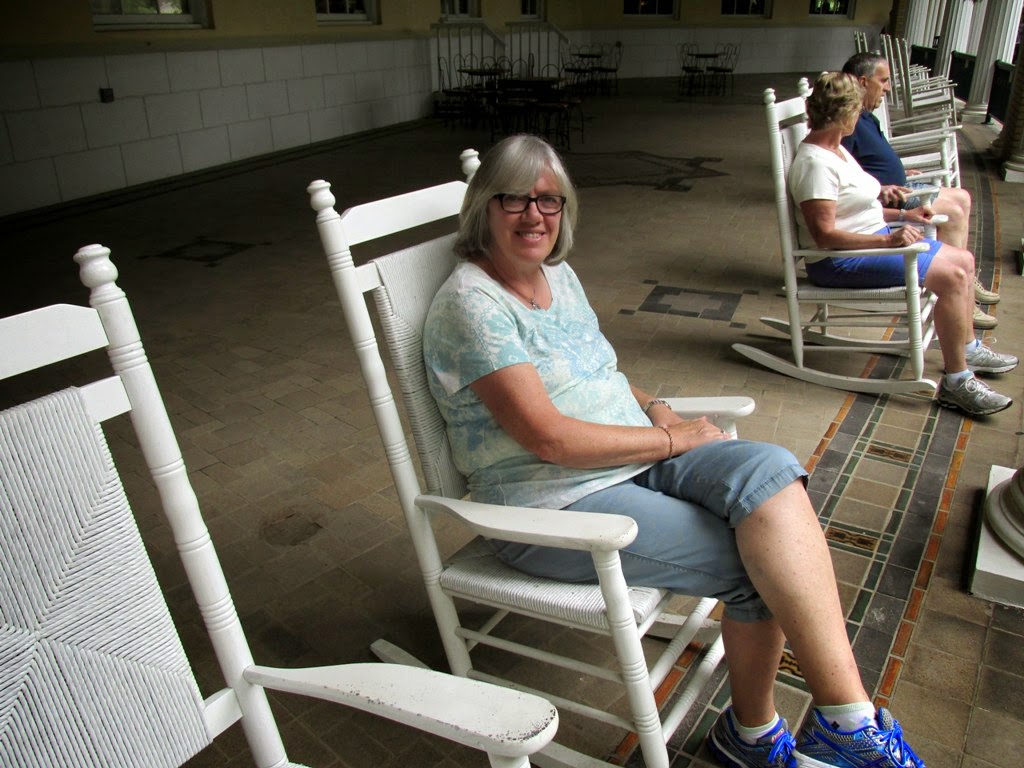 Next we toured the Village of New Harmony, IN which was founded by one of many early 19th century alternative religious groups. They purchased the land for the town in 1814 to built their communal religious settlement.  Here they prospered in their business ventures but decided they needed to relocate to  an area that would provide better transportation support to their coastal customers.  So just 10 years after starting the town, they sold the property to yet another alternative society group started by Robert Owen,  a Welsh business man and social reformer. He persuaded some of the best scientific minds of the period to move to Hew Harmony to work together in a utopian environment to develop advances in science. The experiment was declared a financial failure after just two years and the experiment was essentially over. 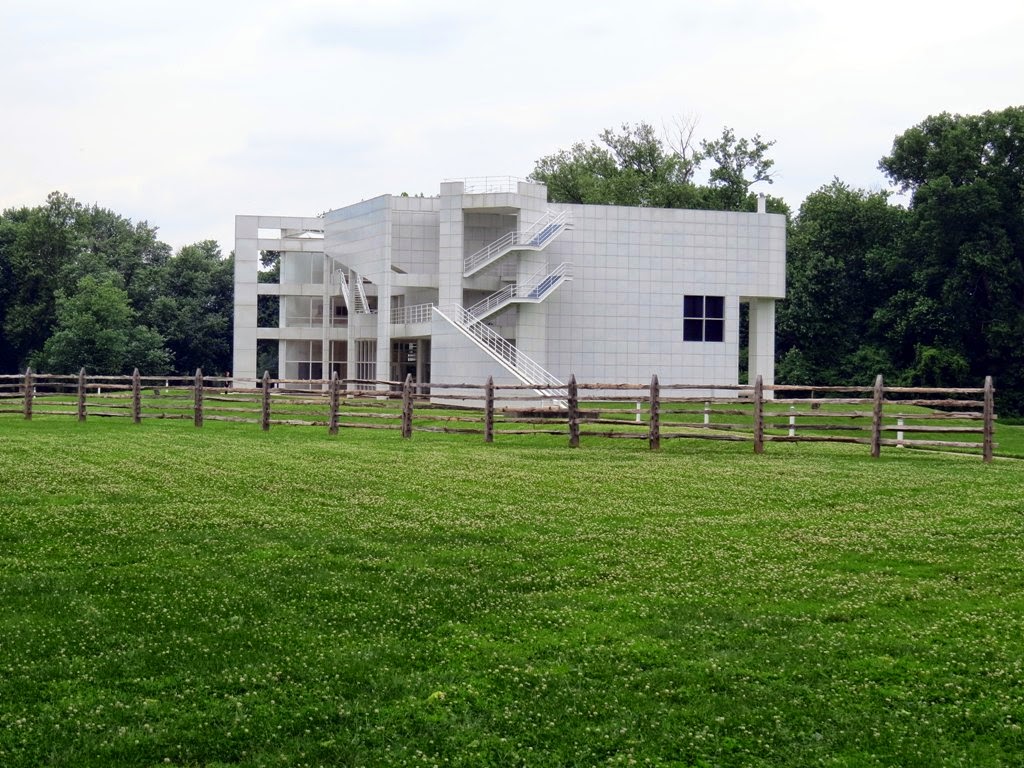 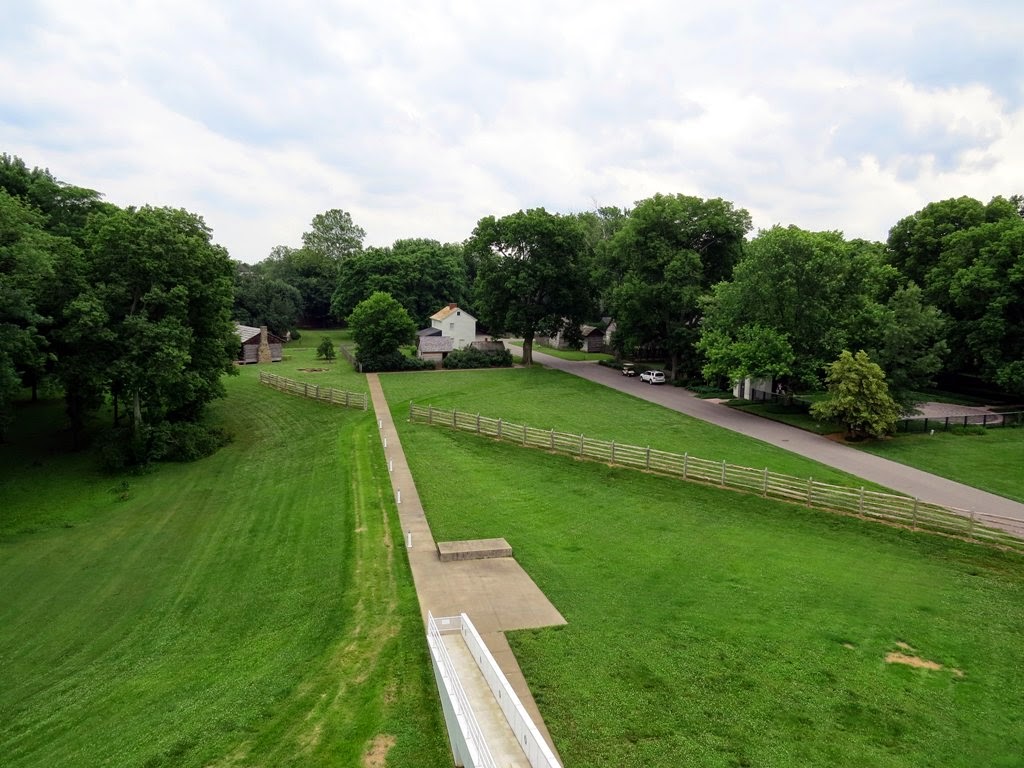 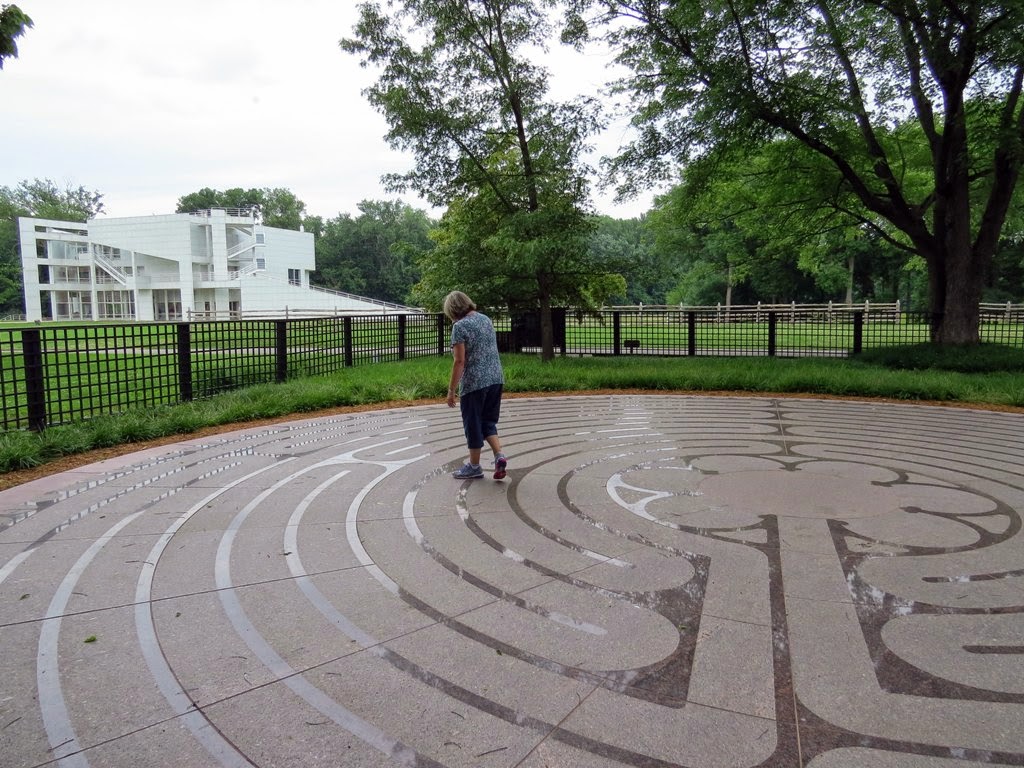 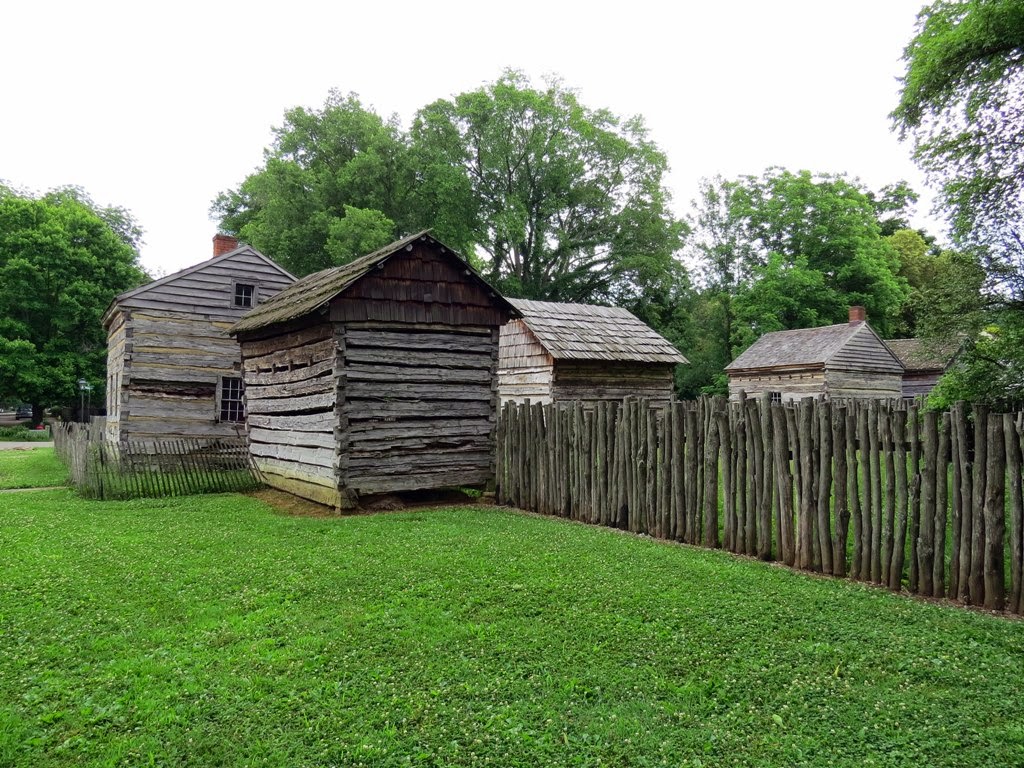 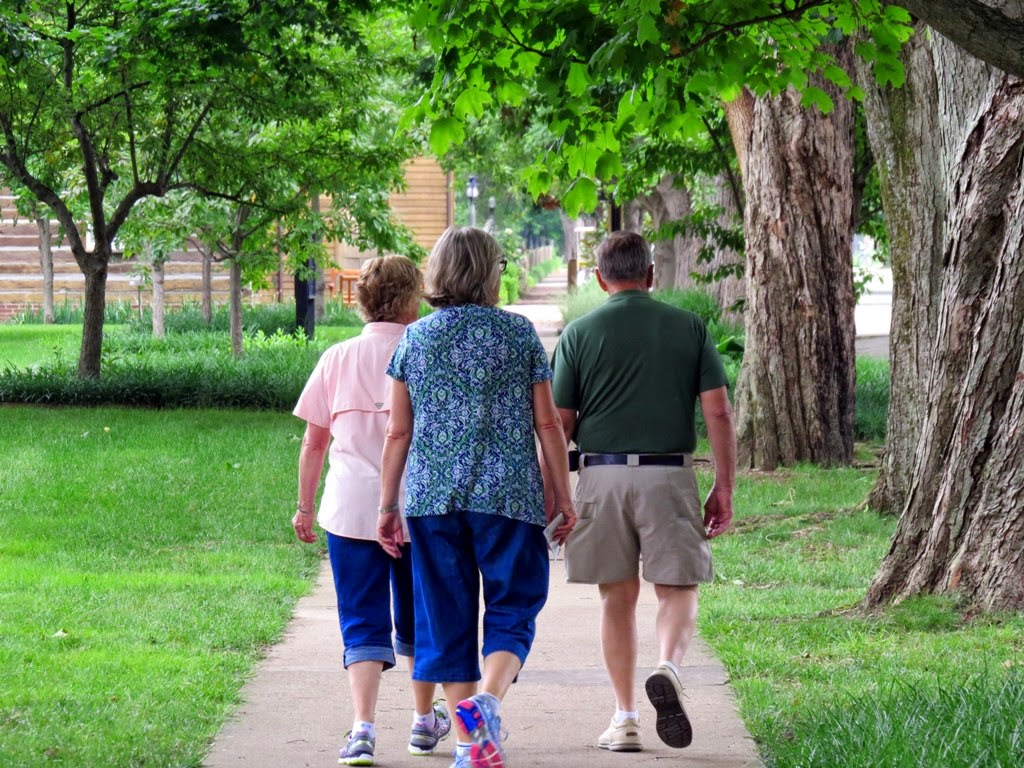 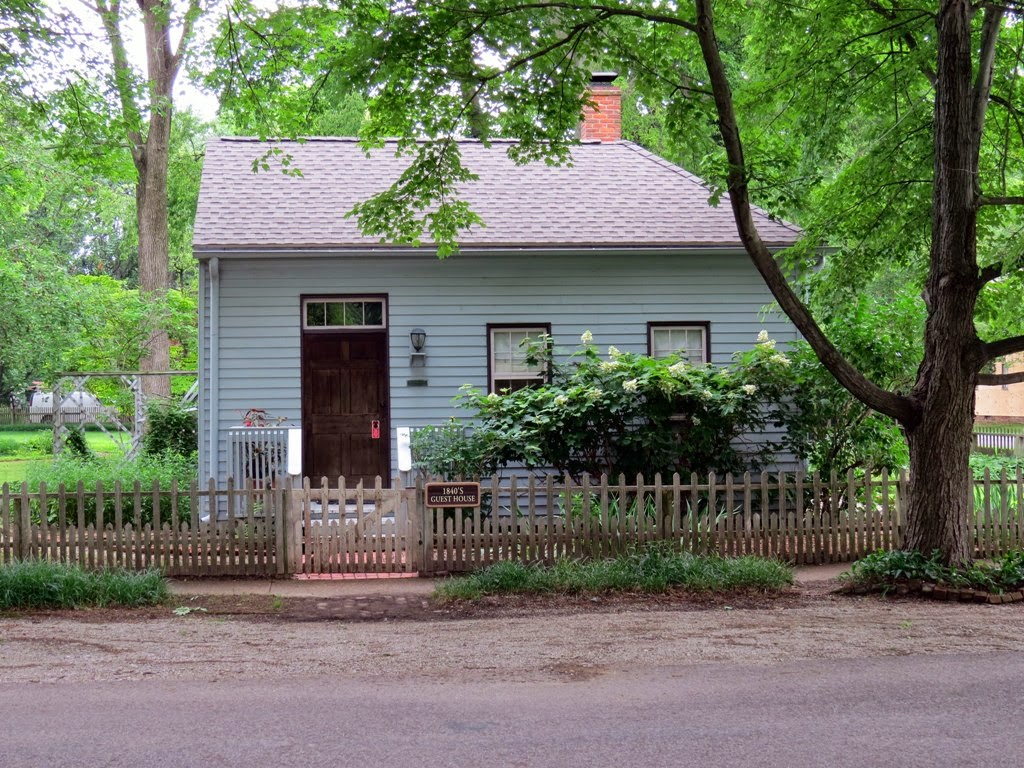 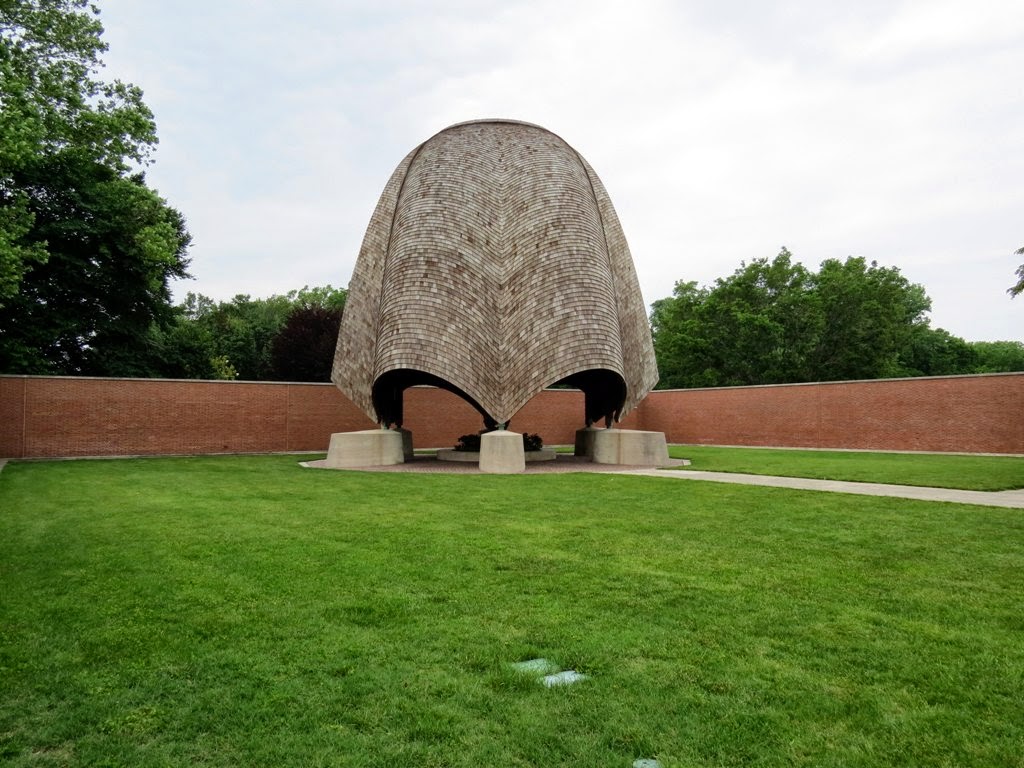 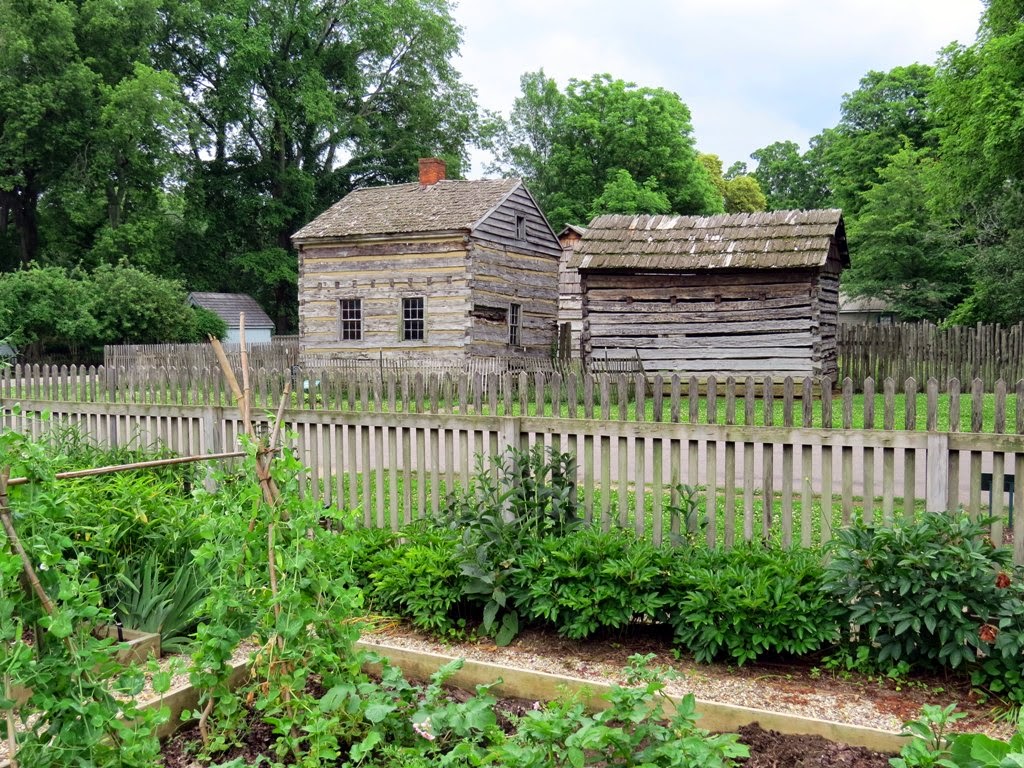 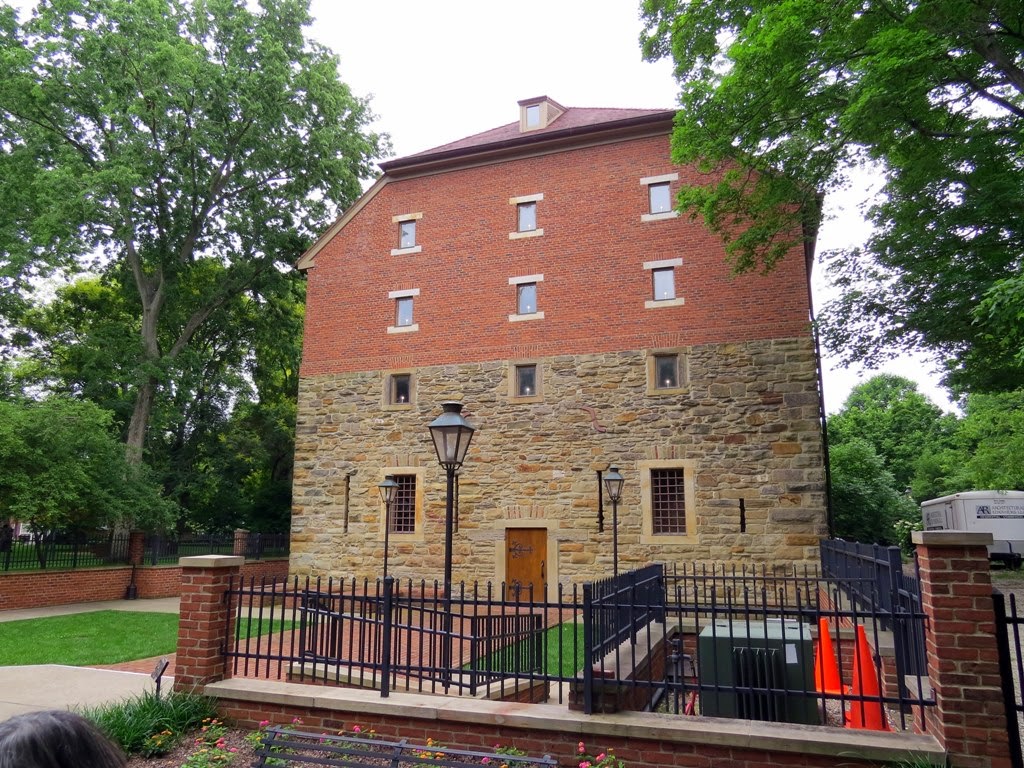 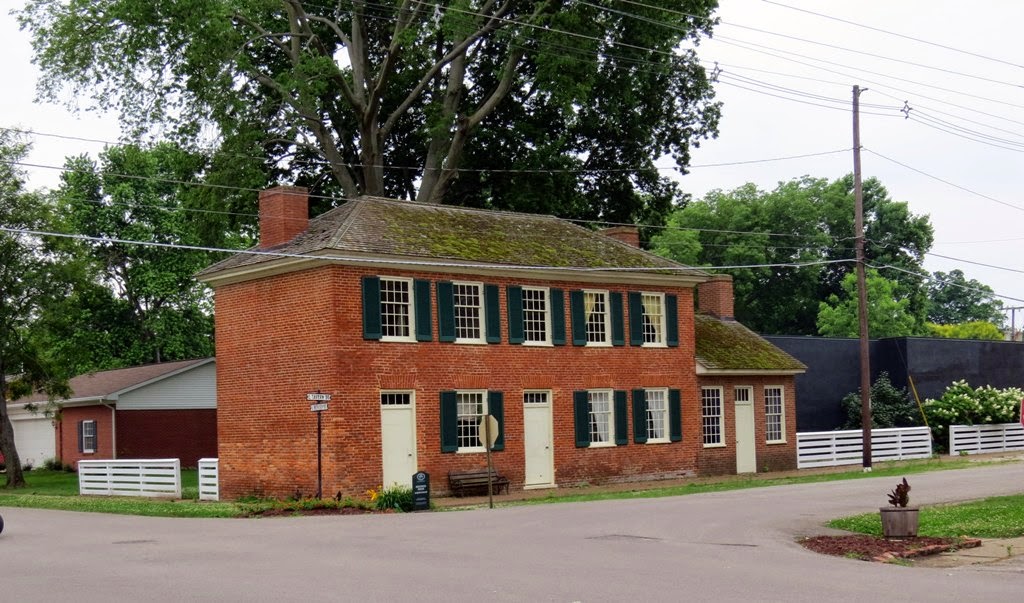 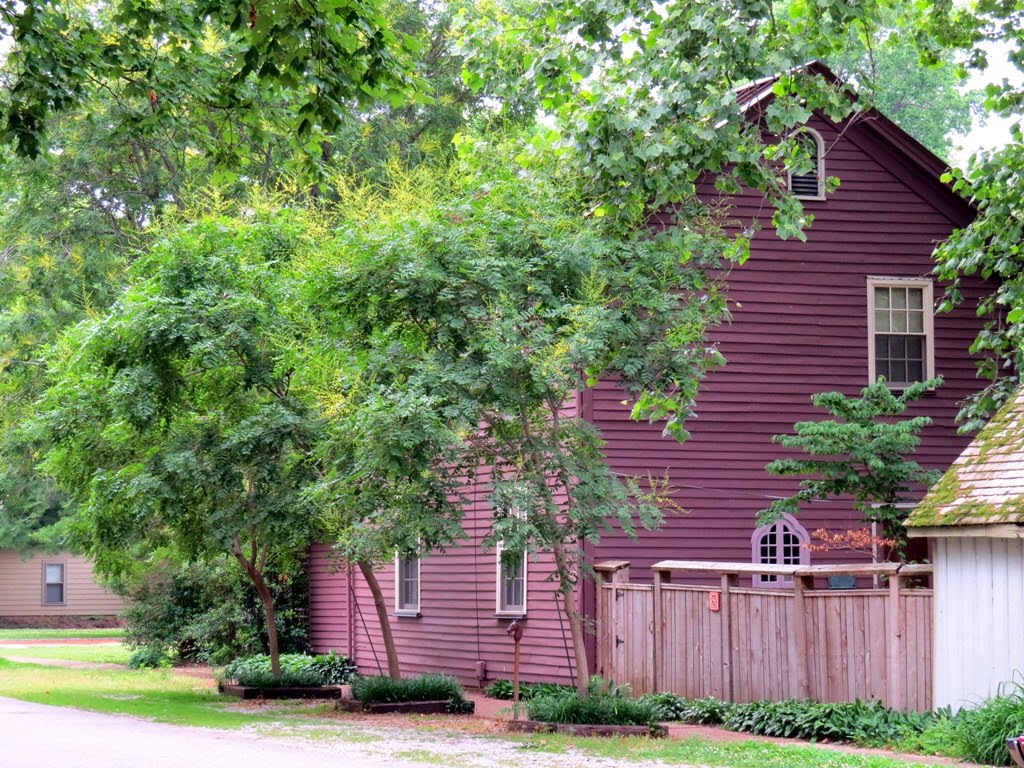 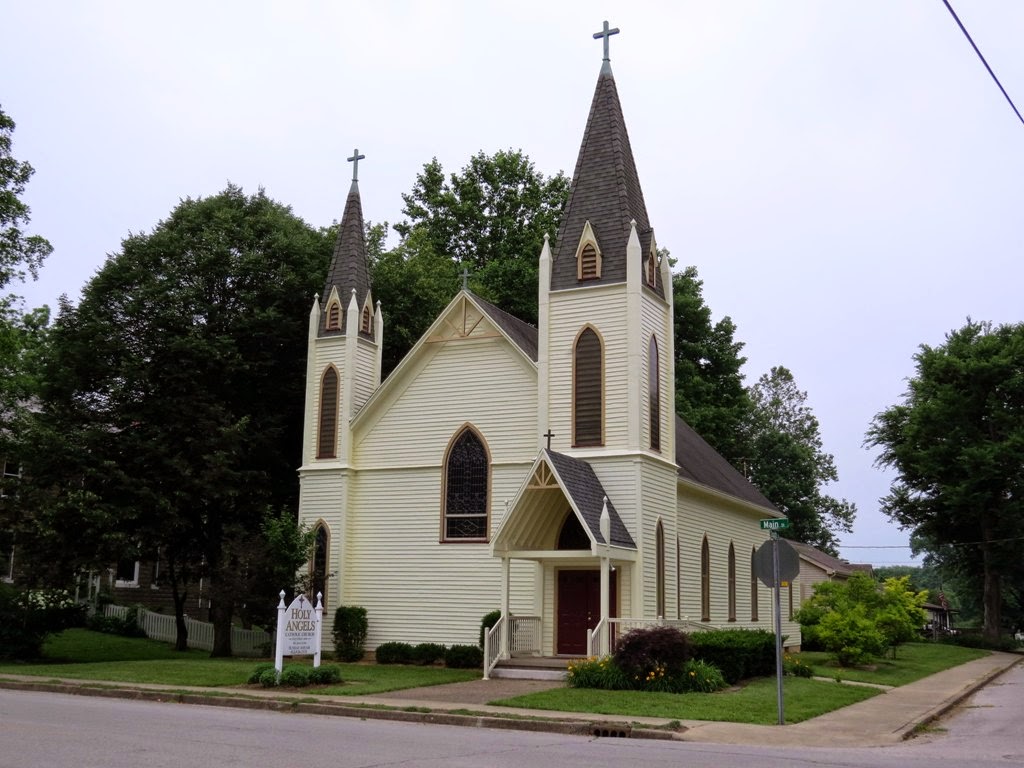 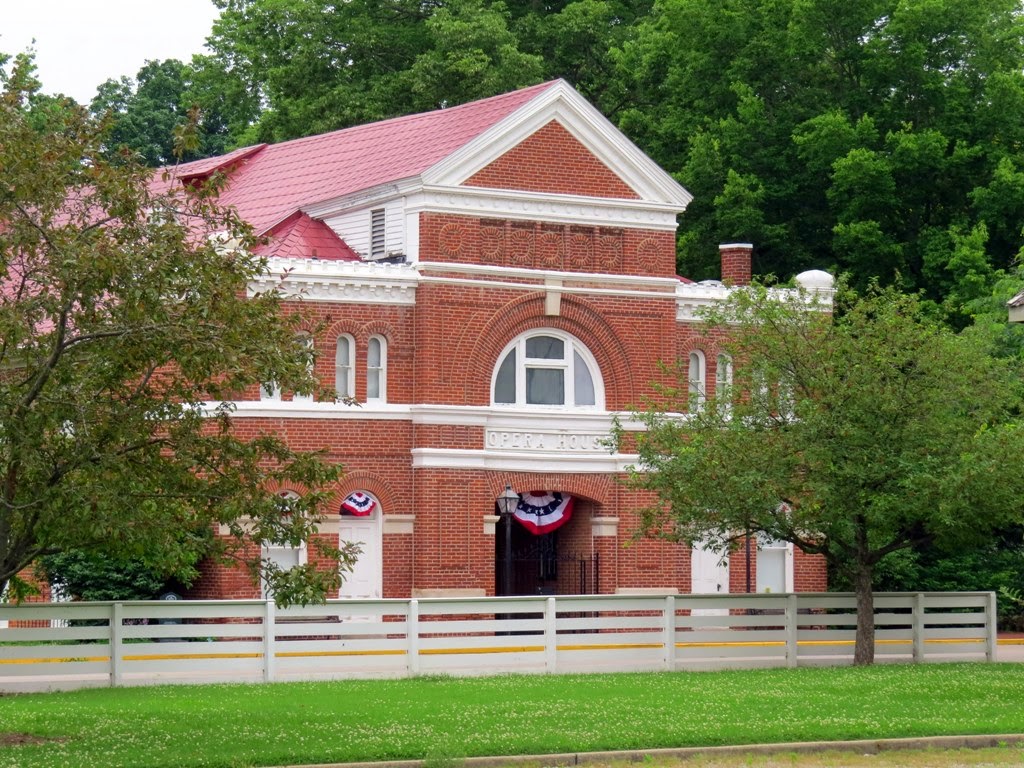 Today, the town of New Harmony has just under 1000 residents and many of the historic buildings have been restored and there is a visitors centers that offers tours of the grounds.  It has also become a popular center for social events with a hotel/conference center along with historic homes available for special occasions. 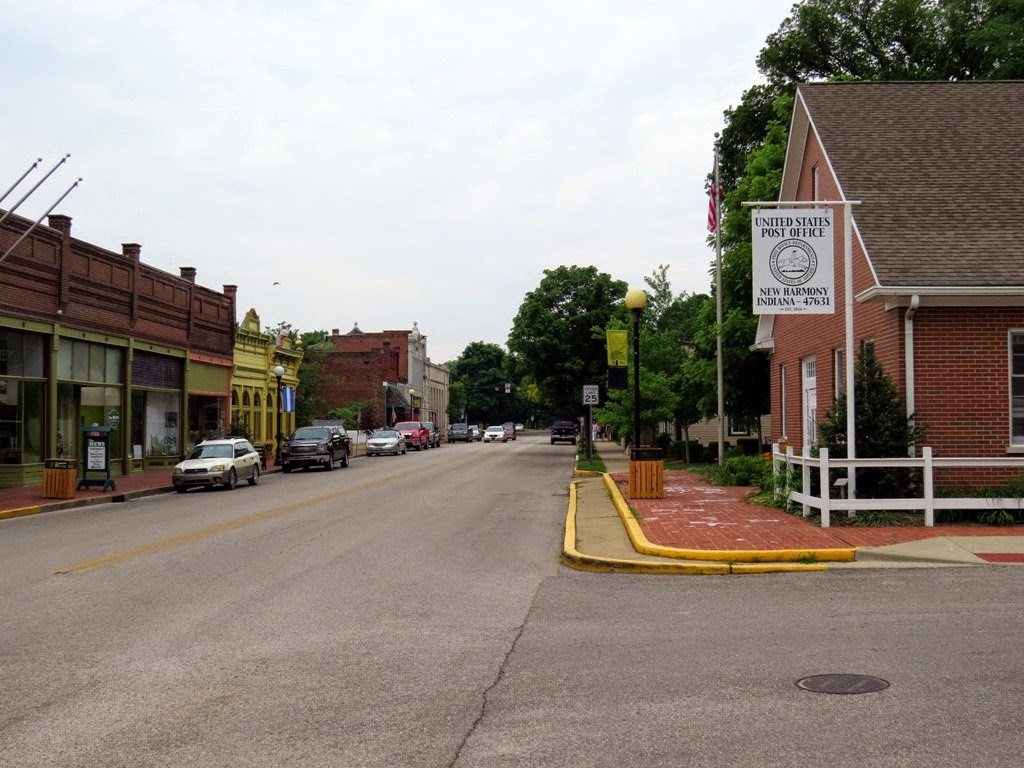 This is a great stop for history buffs.

Next stop was Dayton, OH to spend some time with our daughter Katie and SIL Dain.  We left southern Indiana and headed north taking the beltway around Indianapolis onto I 70 East.  This proved be a mistake.  I 70 was a mess.  The rough road shook the rig all the way to the Ohio border.  We discovered later that day that one of our headlights had failed.  Since we were going by a Sprinter place on the way to our daughters house, we had them check the system and they quickly put things right. 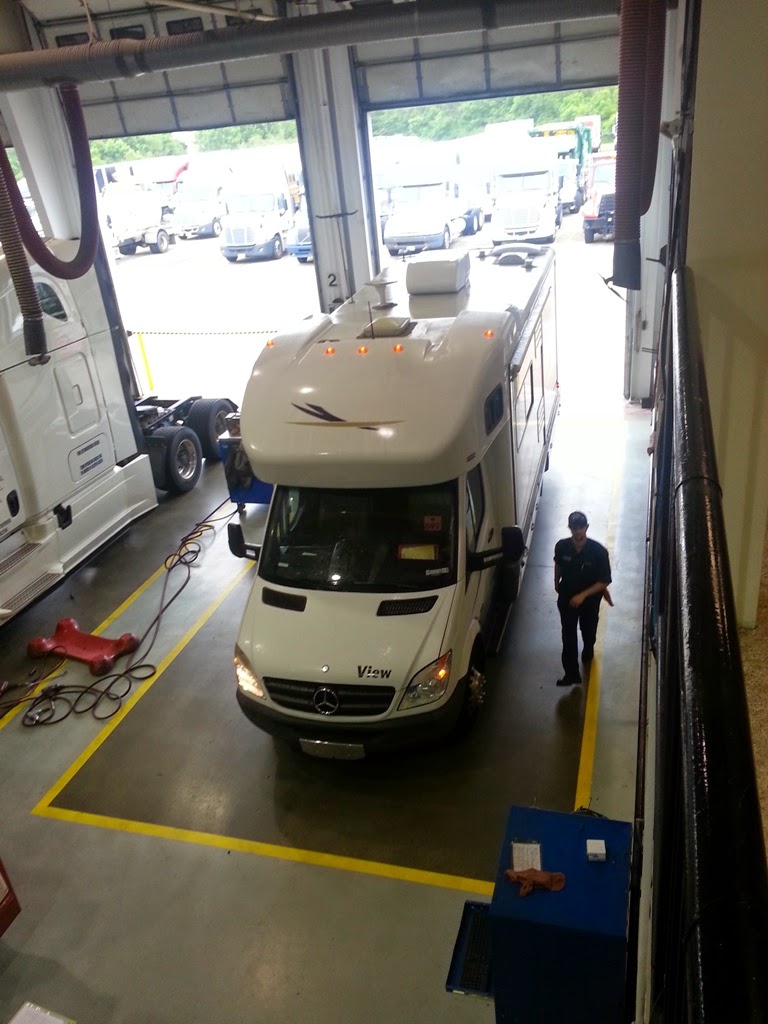 We were able to attend one of Dain's football games.  He is in a league that has teams from three states.  It is clear that they take this sport seriously.  Then , of course, we had to watch the World Cup Futball (soccer to us) in Brazil.  Anneke and Katie dressed in Dutch colors for the first game the Dutch played.  The Dutch luckily won! We also spent time discussing our upcoming trip to San Antonio to help Katie look for her next house.  Since she has recently successfully completed her PhD program in Dayton, she is being transferred to  one of the Air Bases  there. 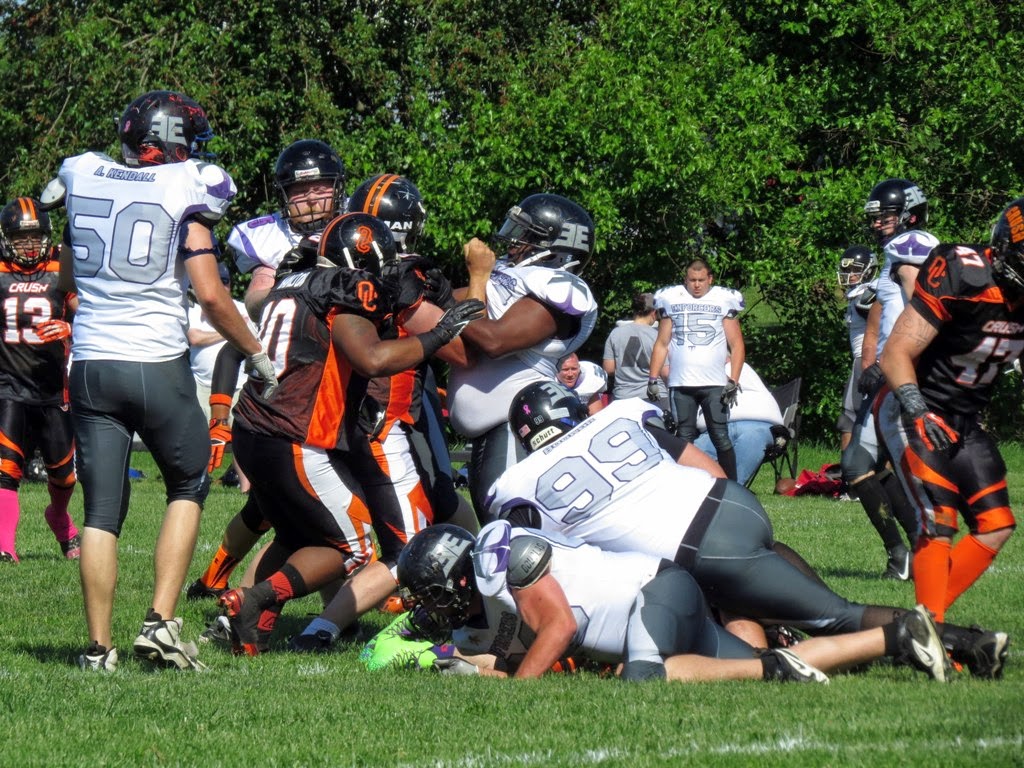 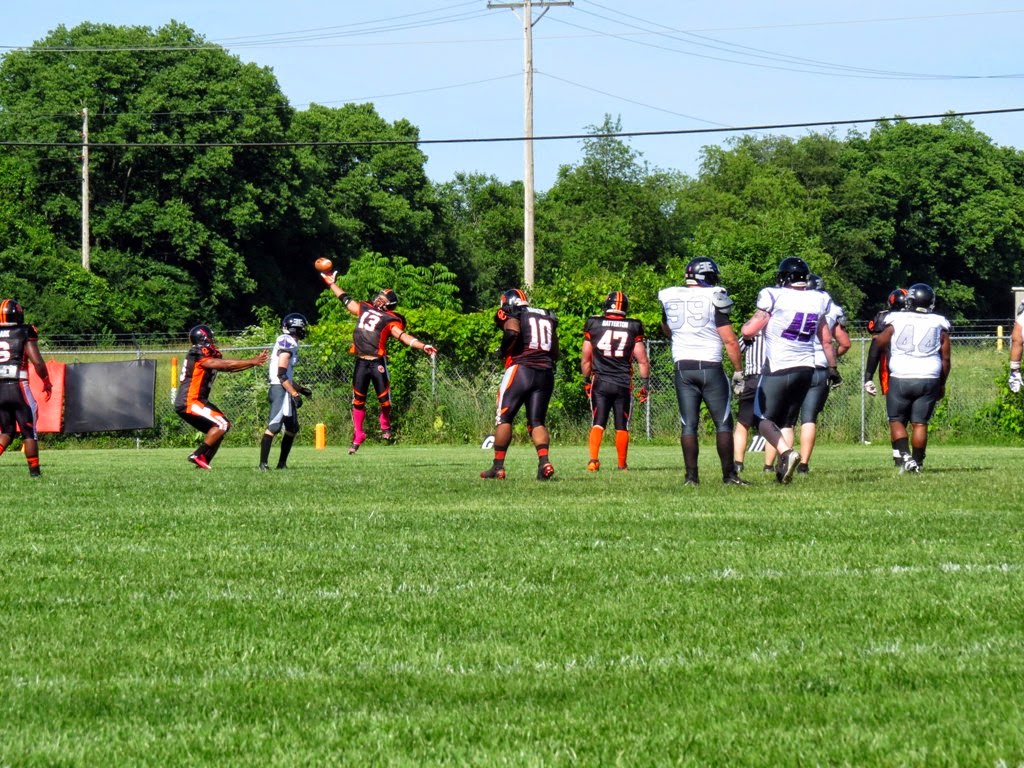 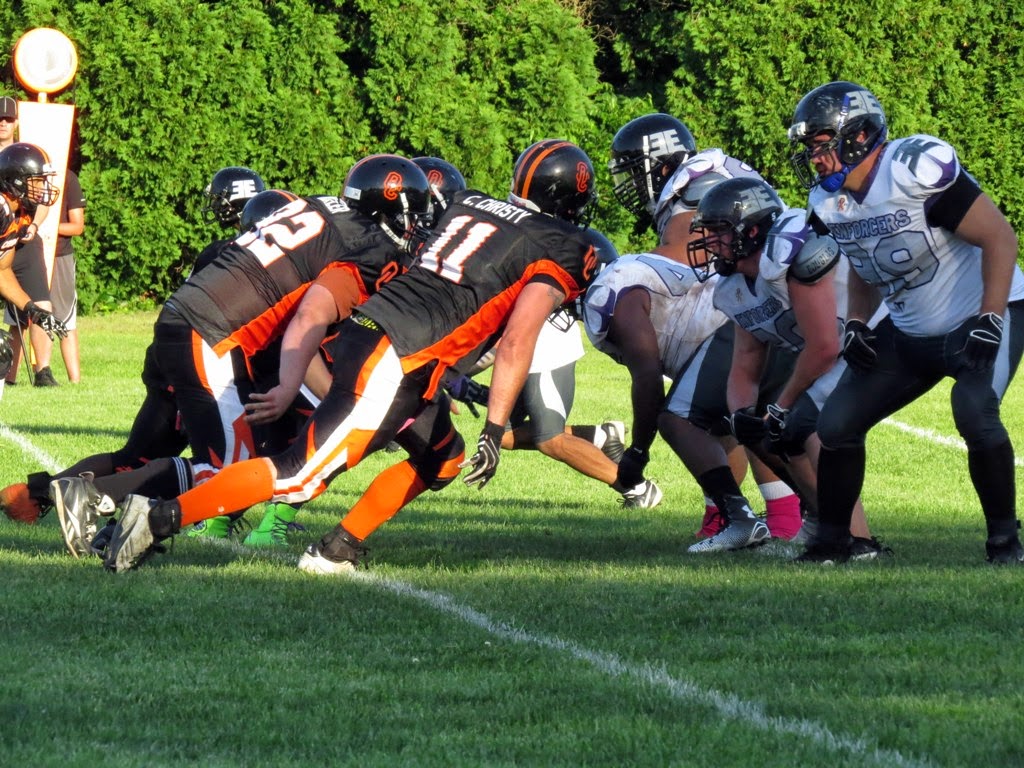 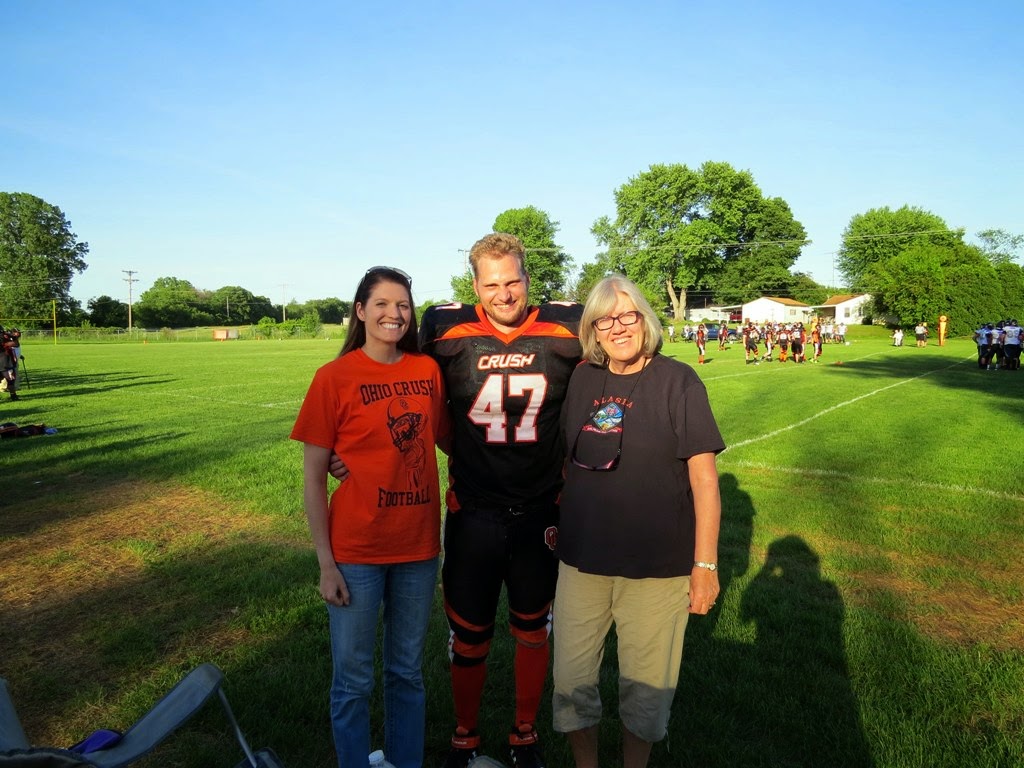 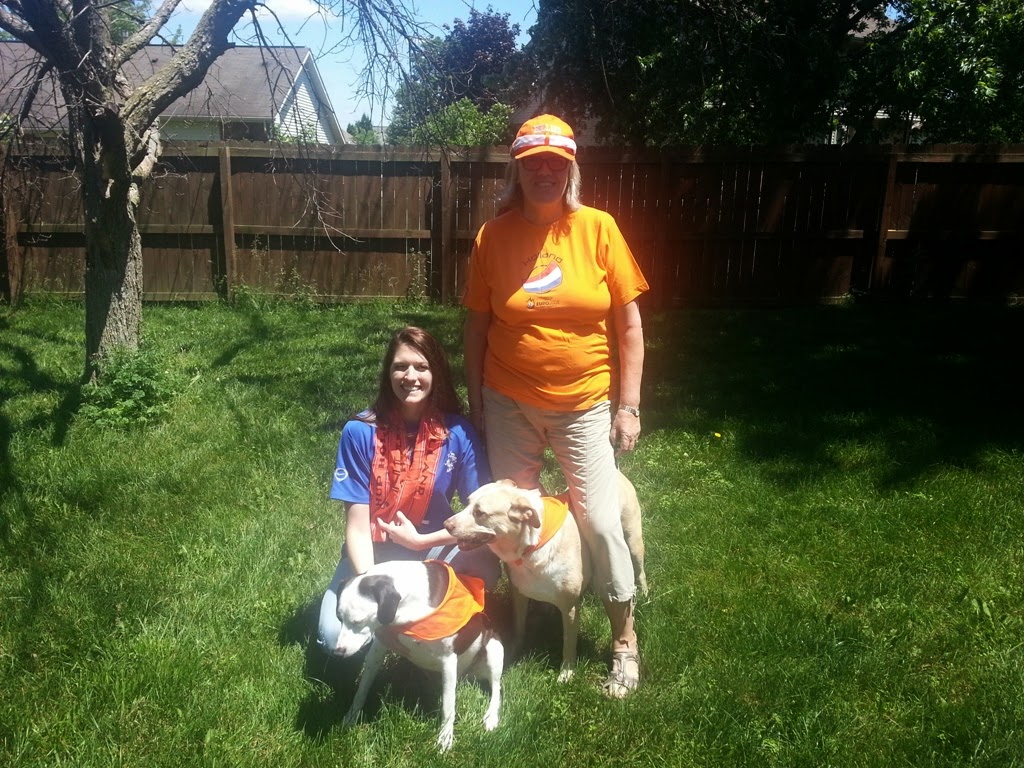 Next time-heading north.
Posted by Chuck and Anneke's RV travels at 7:42 PM

What an interesting post. I was raised in Cincinnati and all the places you mention were not far away. I knew so many folks who went to French Lick every summer but I never got around to going.

Congratulations to your daughter in getting her PhD!

Congrats to Katie on getting her PhD!!

Wow you have been mighty busy. I've been seeing comments from you so I thought you were taking a blogging break. You were and having a good time. Love the pictures of New Harmony. I'd like to walk that labyrinth. If your friends blog about their caravan, I'd love to read it. Dayton is my hometown but I think I'd prefer San Antonio. Hope Katie likes it. Congrats to her on her PhD. UD??

I would say you've been very, very busy. It looks like you've found lots of fun places to visit too. Congrats to Katie!

Congrats to your daughter on her PhD - an impressive achievement for sure.

Thanks for the great tour and pics of the West Baden Hotel and New Harmony. Both look like fantastic places to visit.

I suppose those swastika symbols do raise a lot of questions at first.

Nice too see you weren't letting any grass grow under your feet, you've had a great trip. I'm sure you're very proud of Katie earning her PhD! Quite an accomplishment. The Air Force is lucky to have her. :c)

PS: I know I could have paid someone to change my batteries, but it was the old Snipe in me coming out that made me do it myself. ;c)

Some more places to visit in Indiana.

Wow! You have been on the move!! Always fun to visit family along the way :-)
Congratulations to your daughter on her PhD!!!

Sounds like a great time, and your photos are beautiful! Congratulations to your daughter!

It looks like you had an interesting trip, filled also with family love! Lucky you! And congrats to Katie on her impressive accomplishment.

Sounds like an interesting and fun trip ... the best kind.