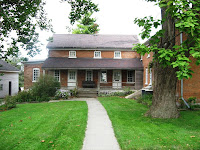 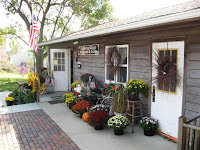 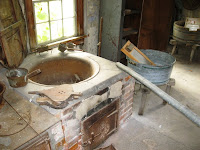 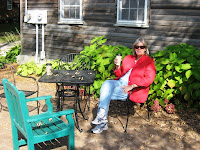 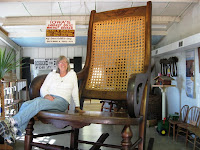 The Amana Colonies were settled by German immigrants seeking a safe haven for their religious beliefs. They were not accepted by the government and established church in Germany. After first settling near Buffalo, NY, they moved west to Iowa to escape influence from the growing population around the city that interfered with their desire for a more isolated existence.

They settled in what is known as the Amana Colonies in the mid 1800’s and for over eighty years lived a remote and communal life style ruled by the church elders. Each family was assigned housing and the type of work they would perform in the community. No one received pay, but was provided what they were determined to need by the elders. They ate in communal groups and lived a regulated life. Oddly, marriage was not encouraged, rather remaining single and celibate was considered more pious and desirable. Despite this view, marriage flourished within the colony.

By the early 1920’s, there was growing unrest with the restrictions of the lifestyle often resulting from increasing contact with the outside world. By early 1930, the colony was in crisis. Because of the economic woes caused by the Great Depression and a growing problem of many of the members of the commune not doing any work. These members felt that since they were provided food, shelter and other needs by the group, whether they worked or not, were unwilling to work. This became such a problem that the commune had to hire outside workers. (Does any of this sound familiar?)

So in 1932, the group decided to abandon the commune lifestyle, form an association to manage the land on a profit sharing basis for those willing to work and a separate church association for those who wished to continue in the beliefs of the church. The daily lives of members were now to be decided by the members themselves.

Today the profit sharing organization still manages a large amount of farm and other lands and owns a number of the stores and tourist attractions in the seven colonies. Because the houses and communal buildings were not distributed among the members, many of these structures still remain today. The colonies have become an active tourist destination mostly consisting of restaurants, gifts shops, several colony related museums and a driving tour of the colonies.
Posted by Chuck and Anneke's RV travels at 9:17 PM

Interesting story and terrific pictures of those old buildings too!

I had never heard of this place until you posted about it ... interesting concept, but no surprise that it eventually fell apart.

Yes,that does sound familiar about getting food and shelter and why work? History repleats itself, does it not? We were at the Amana Colonies several years ago, spent a few days and really enjoyed it. That was our first year out, and we were running in "vacation mode" so didn't stay anywhere long enough. You brought back some good memories!

It's amazing that there are still a few of these types of communities still in existence - the Hutterites come to mind - and the influences of the outside world must be overwhelming. Thanks for the pictures.

I remember sitting in that giant rocking chair several years back! If you're heading East from there, you might enjoy Pike's Peak SP along the Mississippi. :)

Sounds very familiar to me. Scary even...

Love your site, just found it, but will be back.