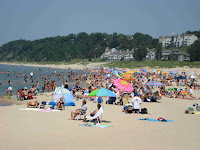 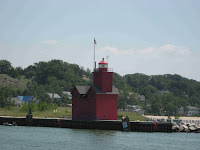 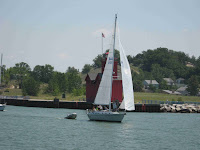 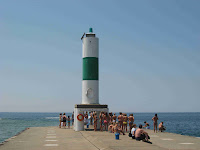 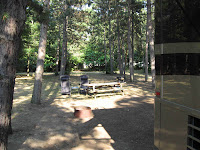 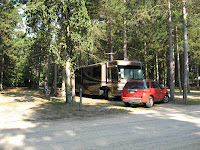 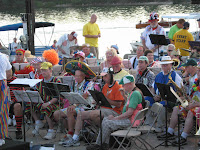 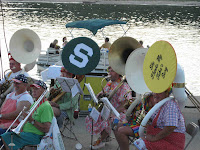 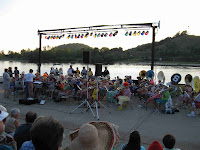 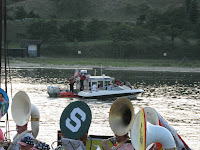 30 July 2007
We spent the morning cleaning the motorhome and enjoying the very large space that we have here. The length of the space has to be in the 150 foot range. It is like having a very long backyard.

There are many bike paths in the area, no doubt due to the Dutch influence. We loaded up the bikes and headed for a park a few miles north of Holland, where we could intercept one of these paths that would take us to the Holland State park and a good view of “Big Red” the historic lighthouse on the opposite side of the entrance channel. When the Dutch immigrants settled in the area they needed a port for transportation of goods. After waiting for Congress to provide the funding for the port, as they promised, for a lengthy period (sound familiar?), they decided to handle it and dug the entrance canal themselves. Oh, yes the immigrants also had to build the lighthouse, as well. That shipping channel is still in use today.

It was a beautiful day by the water and lots of people were enjoying the beach and the water. It was amusing to watch the young girls in their small bikini’s heading out onto the pier followed by a long line of boys intent on impressing them in any way possible, including diving off the pier head first into the boulder packed water. I guess some things just never change.

We then peddled back to the park for a lunch under the trees. It was only a seven mile round trip but that was enough, in the near 90 degree temperature.
After having a dinner prepared on the grill in our “back yard” we headed off to Grand Haven to a concert by the Scottville Clown Band. They have been playing at the Coast Guard festival for 60 years. They dress funny and fool around a lot but have a good sound and great uplifting music. Some of the members have been with the band for as long as 50 years. I particularly enjoyed the piccolo solo during the Sousa songs. He was a young 85.

I have to note that the USCG did its usual good PR during the performance by doing a vessel safety check right in front of the band during the show.
Posted by Chuck and Anneke's RV travels at 11:59 AM

CG P.R. is everything I guess.