A fortuitous road closure and a visit to Fairbanks


We received a note from the tour operator apologizing  for a change in plans for our departure from Denali NP to Copper River.  We were to make a short drive on the Denali Hwy direct to Copper River.  Once again the extended winter conditions kept the Denali Hwy closed and we would have to divert north all the way to Fairbanks and then southeast until we hit the A4 route and south again.  Altogether this was a going to be around a seven hour trip. 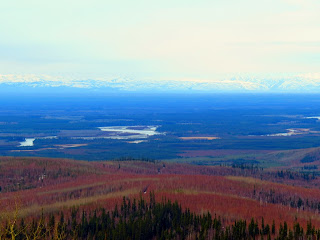 There were several ways you could look at this turn of events.  Since the tour operator had quickly made plans for several stops along the way to eat and see the sights, we chose to view this as a free sightseeing trip that we would have otherwise not gotten to take.  Fairbanks is well known for its vicious winter weather with temps routinely in the 30 to 50 below zero range.  In talking to one young man who attends college there, he indicated that once it hits 30 below he can really not tell any different between that and 50 below.  I made a note to myself not to be there in the winter-ever! 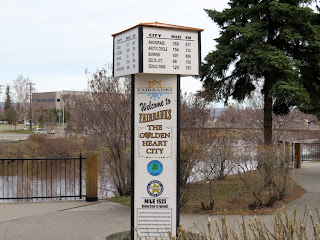 Fairbanks is not near the edge of Alaska, there is a huge amount of open country north, east and west, but is at the end of the major road system.  So for anyone with a RV or regular vehicle it is the end of the line. 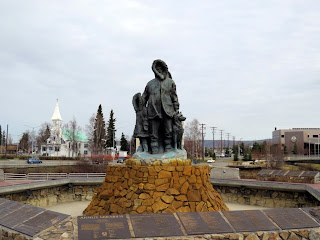 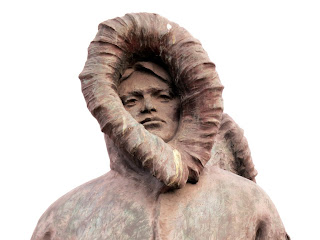 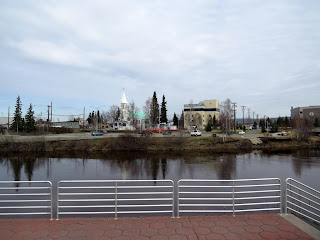 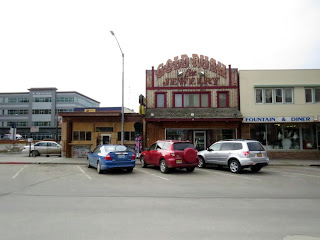 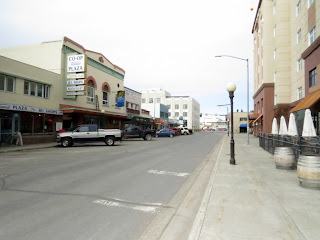 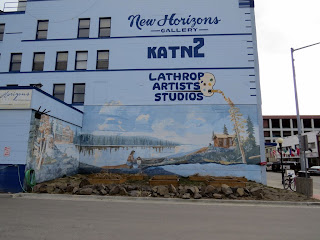 Because of the extreme winters, utilities have to run underground in tunnels and heated with steam.  A regular sight  around town is the venting pipes for these tunnels They are mostly elevated about the height of car traffic to prevent the exhaust from hitting the cold air and immediately freezing on the windshields of the cars. 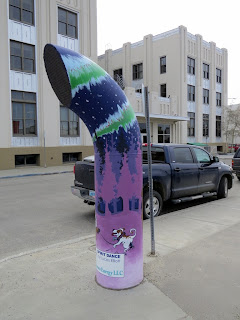 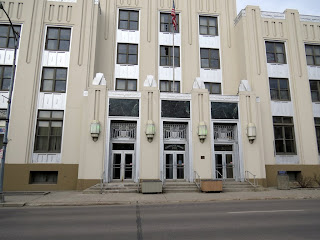 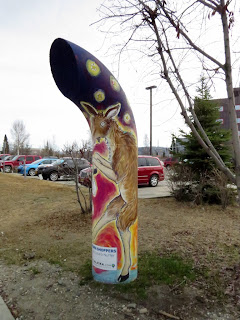 I tried to imagine myself living here, but it just would not come into focus.
Posted by Chuck and Anneke's RV travels at 12:40 PM

Yes, that is a wee bit too cold for me too, not to mention all that white stuff that needs to be shoveled...

Such a beautiful rugged place. I would definitely NOT be there in winter either.
Candy

They have a good sense of humor as regards the venting pipes. It is a beautiful place, and if I could I would love to try one winter there.

Love those decorated vent pipes. Very clever. Too cold for me too. Do they really shovel all that or just drive and walk on top of it?? Snow shoes anyone?? That would be the real meaning of snow tires.

I love your attitude about the free tour. I totally agree.

I'm far enough North at this point in my life too, thanks. But those vent pipes are pretty cool.

Nope, not happening, not ever. They can have it. However, I have a good friend who lived in Anchorage and worked in Fairbanks quite often.She loved it. Did I tell you,she's nuts.

Decorated vent pipes--that's a new one for me!

Having been on the Dalton Hwy and all the way up to Prudhoe Bay ... now way are we ever taking the MH past Fairbanks. But I would love to go to Alaska in the winter ... briefly.

Go with the flow. There is certainly nothing you can do about weather.

Don't think it would come into focus for me either!! :)

Loved the photos of the vent pipes! After the nineties have set in here in Sarasota, I'm ready for a trip to Alaska!

Great attitude. I would look at it the same way.

I would have been thrilled with that detour! Love the artful vent pipes.

We have to agree that, after 30 below, the next 10 degrees doesn't feel any worse. While it didn't stick around for long at a time, we'd often have winters in Butte, MT with serious below zero numbers. Like those venting pipes!

Beautiful header photo of the Eagle.

All those steam vents just remind me that I could never live in such a cold place.