We have returned from our two week trip to Alaska.  It was absolutely a great time and the first time in Alaska for the both us.  We started by flying into Anchorage and spending the night there.  Apparently mother nature had not gotten the memo about spring and winter was still enjoying a little extra time in Alaska.  The day before we arrived Anchorage had four inches of snow fall and some of the roads heading north were still difficult to travel due to snow. Our friends Judy and Gary are making this trip with us and also will be seeing Alaska for the first time.

I have heard a number of descriptions of Anchorage from fellow Coasties who have been stationed there.  I would say that it was more or less what I expected.  It is the largest city in Alaska with a population of just over 350, 000.  That is more than half the population of the entire state.   Area wise, it is a huge city with most of a mountain range within the city limits.  Our bus driver reported that there is a resident population of black and brown bears that number in the hundreds  that can be seen roaming the streets from time to time.  Now that really is what I would expect from Alaska!  Driving thru town, you have to be impressed by the number of small aircraft to be seen flying around, sitting at large and small airports and on the banks of any body of water large enough to allow them to take off and land.  One out of three people here have a pilot's license and there is one airplane for every eight people in the state. It is a very practical statistic, as much of the state can only be reached by plane. 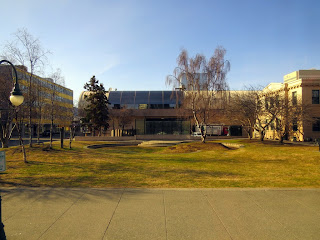 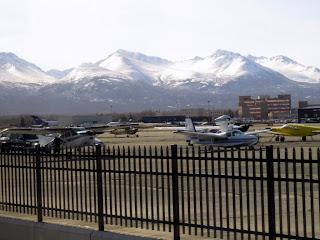 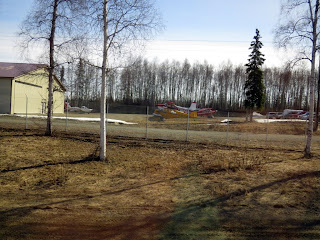 Our first outing was a bus trip to McKinley lodge with hopes of getting a clear view of Mount McKinley, the tallest mountain in North America. Many folks have traveled to see the mountain only to be deprived of any view by clouds and /or fog/snow.  70% of the time there is little or no view of the mountain and much of the remaining time it is only partly visible. The drive to Denali Park began to reveal the real beauty of the countryside along with its rugged wild nature. 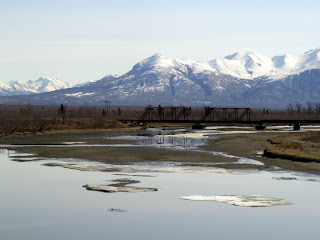 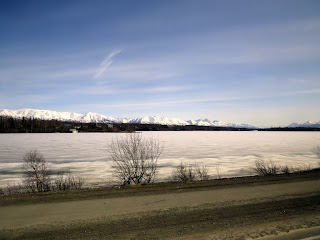 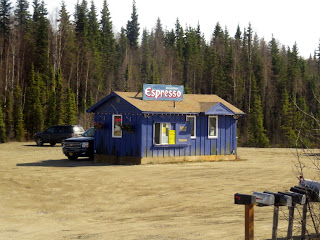 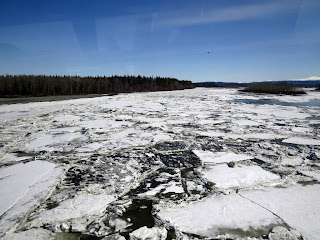 Even before we got close to the National Park, we knew we were going to get lucky as McKinley could be seen clearly in the far distance as we rode along.  We were going to be in that 30% group.  This fortuitous beginning was going to prove to be a pattern for our entire trip.  Everywhere we would go, we would hear how lucky we were to have such clear weather for seeing the rugged beauty.  We enjoyed near perfect conditions for gazing at the mountains for the two days we were there. 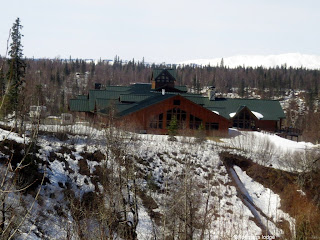 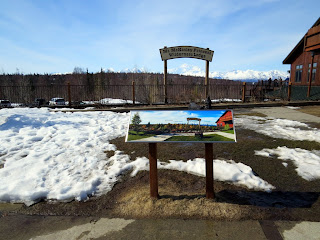 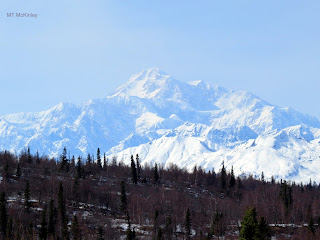 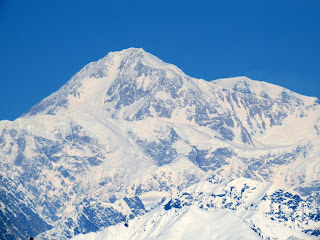 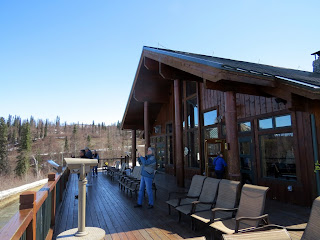 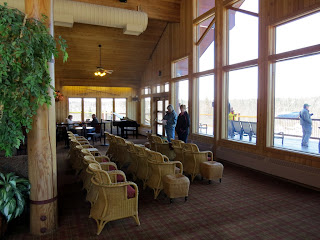 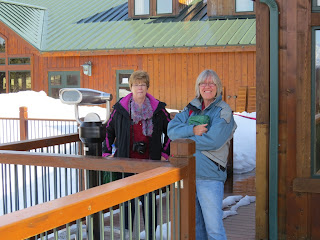 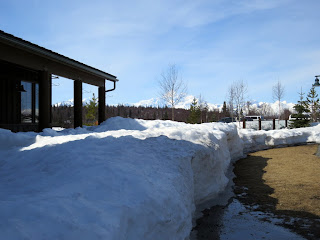 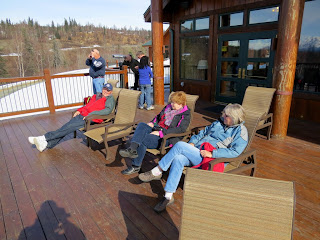 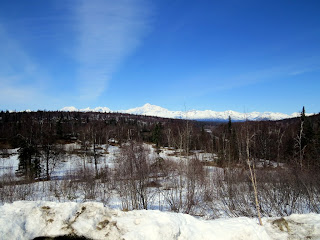 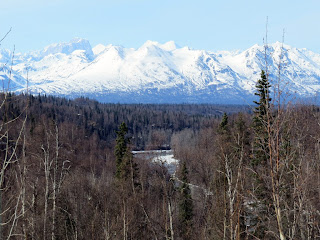 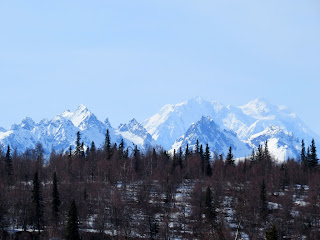 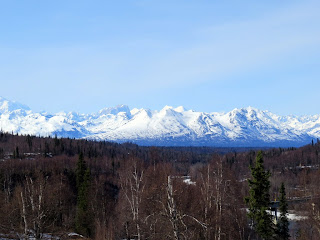 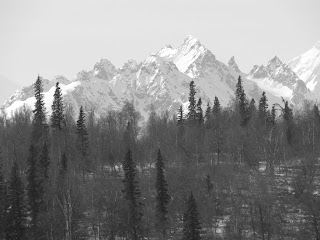 Posted by Chuck and Anneke's RV travels at 9:02 PM

What great picutres! I'm looking forward to seeing the rest of the posts about your Alaska trip.

Oh my what beautiful pictures and what a fabulous trip. I am so glad the skies were so clear for you. Maybe it was that leftover winter. Very interesting about the planes.

When I was in Alaska, I was in the 70% club. You were indeed lucky!

What fantastic photos. It does look like a gorgeous place.

I find your comment about the number of people with pilot's license really interesting. I would never have even thought about that.

Now that's a super trip! So nice that you had clear weather to see the mountains. When I was in Anchorage on a trip with the COMDT, it was really cloudy and foggy, we flew in and out on instruments.

Didn't see any bears in Anchorage, but there was a Starbucks on every corner. I guess that's how the citizens get through those wintery conditions. :c)

Any plans for a return trip in the MH? We're kicking around the idea for maybe 2015.

Now you are bring back my longing to see Alaska, the only state I haven't yet been in. i'm so glad you have clear weather.

Those are some awesome pictures. Thanks for sharing them with us.

Great! We are going to Alaska next summer. Won't be there until late June or early July. Surely no snow then?

I, too, find it interesting to read about the amount of pilots up there.

What a great time you must be having.

We did a cruise to Alaska about 10 years ago. We were there in June and the weather was wonderful. I can hardly wait to go back in the motorhome!

I found the stats on airplane ownership interesting too. It makes sense, I guess but it's pretty rugged territory with nasty weather to be flying around in.

Lucky indeed are those who get to see McKinley. We were in the 30% when we did the pre-cruise land tour. The mountain is breathtaking to see on a blue-sky day. Anchorage ... yeah, nothing special ... but there are some great restaurants to enjoy.

Great statistics. Alaska must be the trip of a lifetime. Your photos are terrific. How lucky you were to have such clear weather. Hope you see a bear or two.

Went to Alaska, as son was living in Willow at the time. the whole 10 days there, saw mtn ONE time. even went to the Park and took that horrendous 4 hour trip into the park and 4 hours back out, got to the viewpoint and it was all cloudy, could NOT see mtn!!! Mt Denali was hiding from us!!

Fantastic photos! There is sure more snow around than I would have thought...